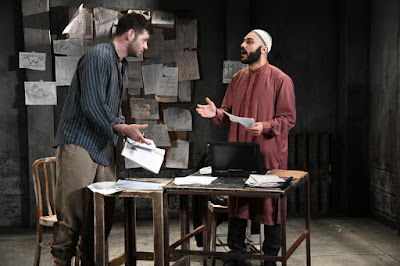 Thomas Keegan, left, and Maboud Ebrahimzadeh as Nick Bright and Bashir in The Invisible Hand at Olney Theatre Center/Photo by Stan Barouh

Once you see The Invisible Hand now on stage at the Olney Theatre Center, you'll understand why performances are selling out. The acting alone is worth the cost of a ticket.

For regular theatregoers, it's another must see!

The story is about an American kidnap victim, Nick Bright,  a savvy financier, imprisoned in a dreary, grey cell in Pakistan, a developing country which, Nick's captors claim, has been ravaged by plundering Americans and the "American Way"  (i.e., capitalism).

Nick's going to pay the price, or is he?

Perhaps his sharp financial skills can be put to the test, and serve dual purposes: If he can earn $10 million on shorts, puts, and sell orders trading on the web, he can save his own skin, and the money can be put to good use helping impoverished Pakistanis.

Get Nick a laptop and the internet. Can he do it?  Anything is possible.

From initial confidence, Nick's slow demise is expertly delivered by Thomas Keegan under the skilful tutelage of director Michael Bloom.

From scene to scene in the single set cell (which never becomes tiresome, thanks to Luciana Steconni's design), Nick plummets physically and emotionally as he begs permission to phone home and save his life.

He cries, he sweats, he implores God and loses self-control. Nick is human. Nick is us as we are swept up in the drama until we become one with him, fighting for life.

The cool and collected "Bashir" (Maboud Ebrahimzadeh)      is the heavyweight captor who commands most of the action. He follows the Iman, the religious and community leader, adroitly performed by Mueen Jahan who determines the beneficiaries of Nick's earnings.


Rounding out the four-member cast is "Dar" (Ahmad Kamal), in the beginning, a sympathetic guard who conveys empathy for Nick and soothes fears. Alas, Dar's mental comforts are shortlived.

The play takes an unexpected turn when Pakistani colleagues upend loyalties. The actors' conversions quickly convince the audience of new personalities and goals.

Who do you trust?

Applause to the sound designer, Roc Lee, whose electronic musical additions between frequent scenes usher in the emotions of the moment. Dogs bark, helicopters hover, and drones strike, contributing to the overall effect of the place of last existence.

In this case, it's is an excellently crafted cell with concrete brick walls and an iron grate for a ceiling. Jesse Belsky's eerie lighting from the side window and nighttime effects heighten the mood of cell life.

That the playwright Ayad Akhtar reads the Wall Street Journal every day will come as no surprise (his dad bribed him with a subscription for years), but a hedge fund manager’s knowledge is not necessary to understand the dialogue. The words are defined for the Pakistani jailers (and the audience), and it's easy to follow the jargon (a tribute to the playwright).

The Invisible Hand is a term from economist Adam Smith (1723-1790), the author of the Wealth of Nations, who wrote that the pursuit of self- interests is more beneficial to society that interests pursued to benefit society (?), in other words, self-interest (guided by an “invisible hand”) has a better outcome than interests dictated and regulated by government (free trade v. restricted trade). 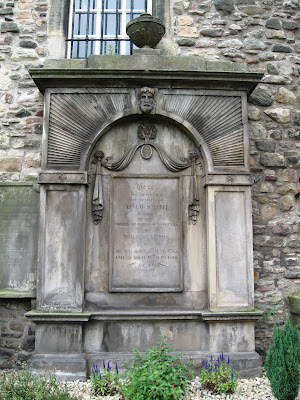 The grave of economist Adam Smith at Canongate Kirkyard, Edinburgh, Scotland which reads "Here are deposited the remains of Adam Smith Author of the Theory of Moral Sentiments and Wealth of Nations  He was born 5th June, 1723 and he died 17th July, 1790/Photo by Patricia Leslie

Mr. Akhtar's Disgraced won the 2013 Pulitzer Prize for Drama, and The Invisible Hand is one of seven compositions by Mr. Akhtar about Muslim-Americans. For the 2015-16 season, no other playwright in the U.S. had as many works produced.

Olney's artistic director, Jason Loewith, told me that it had taken him since 2014 to secure rights to The Invisible Hand,  this its D.C. area debut. When you see it, you'll understand why Mr. Loewith worked so hard.

What: The Invisible Hand by Ayad Akhtar

Tickets: Begin at $54 with discounts for groups, seniors, military, and students.

Ages: Recommended for ages 16+ due to violence, mature themes, and adult language. Contains live gunshots and fake blood. The Olney rates it "R."

Duration: 90 minutes and one 15 minute intermission.

Refreshments: Available and may be taken to seats