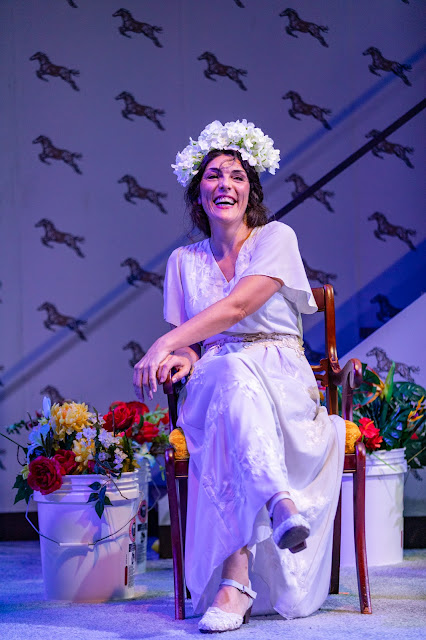 Mabel del Pozo is Rosita in Gala Theatre's  Doña Rosita la soltera (Dona Rosita the Spinster)/Photo by Daniel Martinez
The word "spinster" is not heard or read much these days; nor, for that matter, is "bachelor," but to be a "spinster" in
yesteryear (a half century ago and more) was not a good thing.
Today?
Who cares? 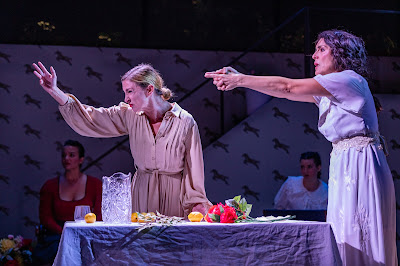 From left: Luz Nicolas is the Aunt and Mabel del Pozo is Rosita in Gala Theatre's  Doña Rosita la soltera (Dona Rosita the Spinster)/Photo by Daniel Martinez
Weary am I of the sad souls on screen and stage whom I've encountered in the last week.
There was Orson Welles as Charles Foster Kane celebrating the 80th anniversary of the "best all-time ever" film, Citizen Kane; there was Jessica Chastain as Tammy Faye Bakker in a new release about Tammy Faye's Eyes (Jessica Chastain is a shoo-in for Best Actress nominee!) and here comes Doña Rosita, a woman left behind by a man in the age-old story of a woman in plight (when she should be in flight) and she waits.

And waits. On the stage of  GALA Hispanic Theatre.
I can't recall any performance where I was as eager to read a script as I was to read Doña Rosita la soltera, a running poem by Federico García Lorca (1898-1936), his last play before he died at the hands of  Francisco Franco's thugs in Spain, García Lorca's remains still undiscovered.
Nando López , a Spanish novelist and playwright
who won the 2016 Helen Hayes Award for Outstanding Play for Lorca's Yerma, has written the world premiere adaptation of Doña Rosita.
Subtitled The Language of the Flowers, the wonders of Rosita's uncle's garden help flesh out the story.

Doña Rosita (Mabel del Pozo) resides with her uncle (Ariel Texido, in one of several confusing roles) and her domineering aunt (Luz Nicolas).
With the servant (Laura Aleman), the aunt upstages the pseudo- protagonist Rosita whenever the three women are together, the servant more of a sister than a housekeeper, commanding every scene shared with Rosita who accepts a minor role.
Rosita becomes a ghost in the background, a nobody (like Emily Dickinson):

I'm Nobody! Who are you?

Rosita, kind and gentle, fades like the flowers and her dull apparel (by Silvia de Marta).

Like their namesake, Rosita, the flowers bloom, they mature, they wilt, and die, constant reminders about life's brevity. In their bliss, they wave and speak their glories, like García Lorca's poems in the script.
Says Rosita:

The rose it had opened

with the light of morning;

so red with its hot blushes

the dew had burnt away;

so hot there on its stem that

the breeze itself was burning;

so high there! How it glowed!

If you haven't grasped by now, Doña Rosita la soltera (Dona Rosita the Spinster) is not an uplifting play. García Lorca frequently wrote about women who suffer the pangs of unrequited love and his setting here at the turn of the 19th century confines Rosita to a meandering self-doubter who questions her being.
She waits years for her fiancé who promises he'll return.
She believes him.  (Silly girl!)
The script captures the descent of a hopeful bride-to-be, and life slips away.  She is a "reservation on hold."

Gather ye rosebuds while ye may,
Old Time is still a-flying;
And this same flower that smiles today
Tomorrow will be dying.

The glorious lamp of heaven, the sun,
The higher he's a-getting,
The sooner will his race be run,
And nearer he's to setting.

That age is best which is the first,
When youth and blood are warmer;
But being spent, the worse, and worst
Times still succeed the former.

Then be not coy, but use your time,
And while ye may, go marry;
For having lost but once your prime,

You may forever tarry

The housekeeper's cocky personality wants to:

Let the sun shine in the corners! Let us hope for many years of cutting roses!

Says Rosita:
There is nothing more living than a memory. They can make life impossible. That is why I have a profound understanding of those old drunken women who wander through the streets trying to erase the world, who sit and sing on the benches in the avenue.

The words drift and float, weaving their sad spells in melancholy which engulf Dona Rosita, aimless, coasting through life, accompanied by a humble but magnificent musical background (by David Peralto and Alberto Granados) which increases its intensity at just the right times before it slowly settles into absence.
This is a poetic feast, spoken in Spanish with English translations elevated on two screens stage left and right. (For non-speaking Spanish guests, may I suggest a seat higher up to be able to read English translations and catch most of the stage action.)

Lighting and sound (by Jesús Díaz Cortés) never miss an entrance or a beat.
A roving table is a critical prop, the centerpiece of most scenes. The actors wheel it from place to place, covering it, uncovering it as it transitions to a chair, a desk, a bed, a piano, a nun's habit, even a table, and more, a metaphor for Rosita!
Society's pressures!
All is not lost on modern audiences, however, since it takes only a few moments to realize that juxtaposed against then and now, Doña Rosita gives heft to present-day women and our confidences that we won't wait for any man...will we?
Dear Rosita: Time waits for no woman.

Mother, take me to the country

in the light of morning

to see the flowers open

on their swaying stems.

A thousand flowers are speaking

to a thousand lovers,

and the stream is murmuring

now the nightingale has ceased.

Masks: Masks and proof of vaccination or recent negative COVID test required for all public performances. Temperatures taken at the entrance.

Duration: About two hours with one intermission

Metro stations: Columbia Heights or McPherson Square. From McPherson Square, take a bus up 14th, or walk two miles and save money and expend calories! Lots of places to eat along the way.

Parking: Discounted at the Giant around the corner and additional parking at Target ($1.50/hour), both on Park Road, NW.
For more information: Call (202) 234-7174 and/or email info@galatheatre.org


Posted by Patricia Leslie at 11:39 PM No comments:

A 'concert of remembrance' at the Kennedy Center 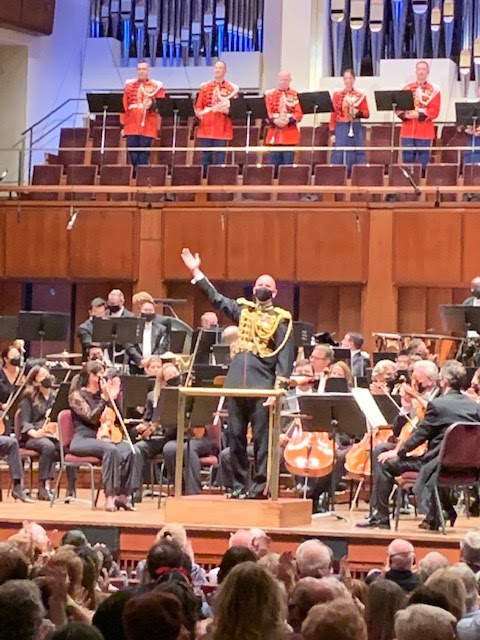 At the Kennedy Center, the conductor of "The President's Own" U.S. Marine Band  led the Star Spangled Banner/Photo by Patricia Leslie
It's hard to know where to start since there were so many outstanding pieces at the Concert of Remembrance Friday night at the Kennedy Center, but any program with Aaron Copland's Fanfare for the Common Man is a certain draw.  That performance by the National Symphony Orchestra under the tutelage of Maestro Gianandrea Noseda stood no chance of anything but "marvelous," "magnificent," "outstanding," and more since that is what the night brought in remembrance of September 11, its heroes and those of covid and all the victims of whom Dr. Francis Collins of the National Institutes of Health (which he called the "National Institutes of Hope") reminded us.
"The President's Own" U.S. Marine Band joined the NSO to open the evening with a thunderous Star Spangled Banner. 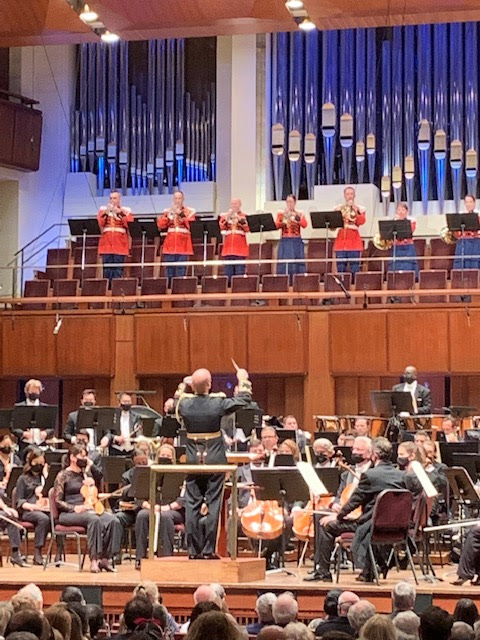 The conductor of "The President's Own" U.S. Marine Band also led America, the Beautiful at the Kennedy Center/Photo by Patricia Leslie 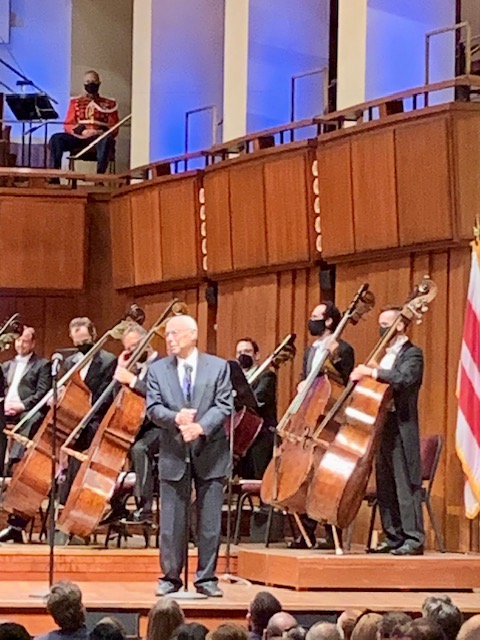 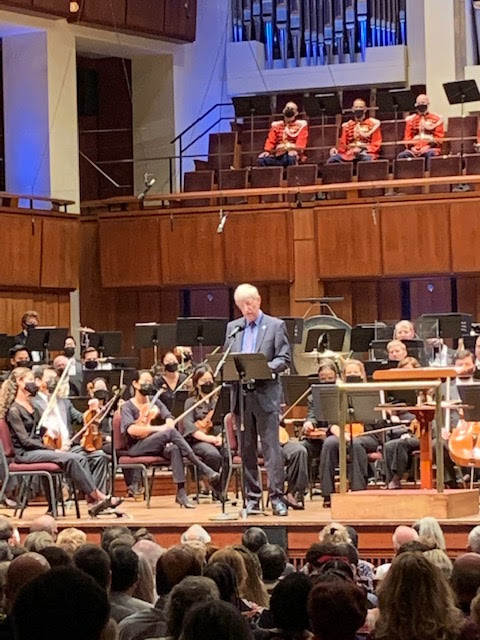 Dr. Francis Collins from the National Institutes of Health paid tribute to the heroes and victims of September 11 and covid. The Kennedy Center chairman David Rubenstein introduced Dr. Collins and said the doctor has a rock band, The Affordable Rock 'n' Roll Act/Photo by Patricia Leslie 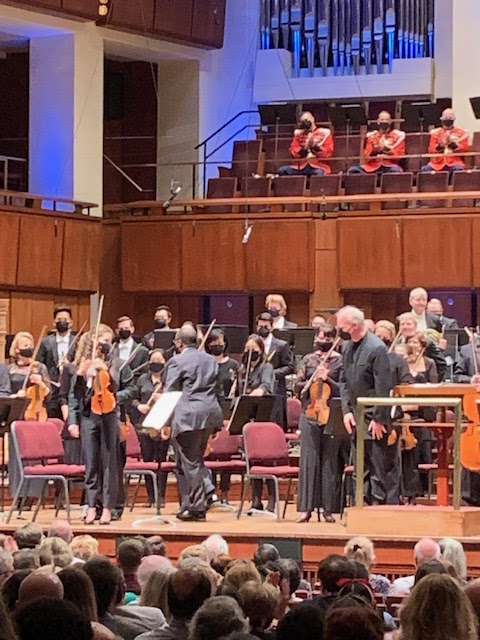 James Lee III who composed the stunning An Engraved American Mourning which premiered Friday, left the stage at the Kennedy Center before I could take a picture of him from the front. On the right is Maestro Gianandrea Noseda who introduced Mr. Lee/Photo by Patricia Leslie 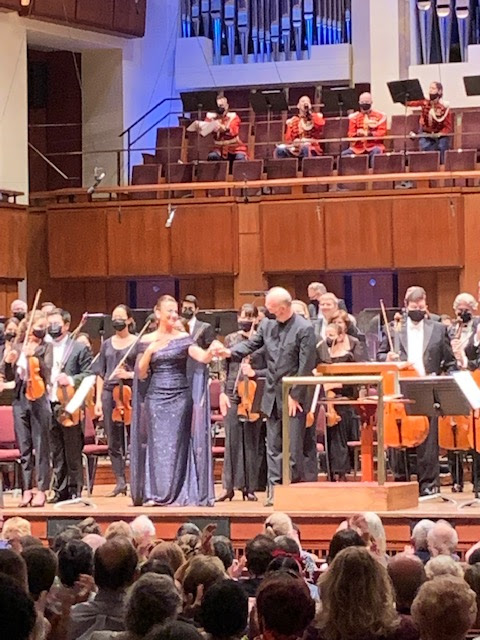 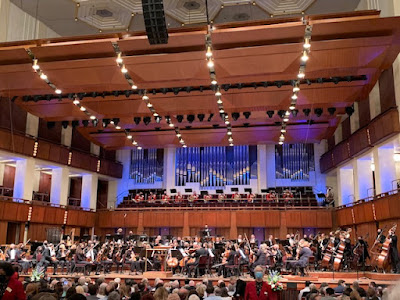 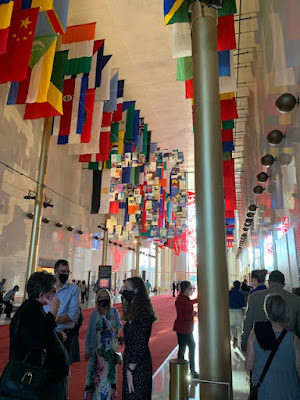 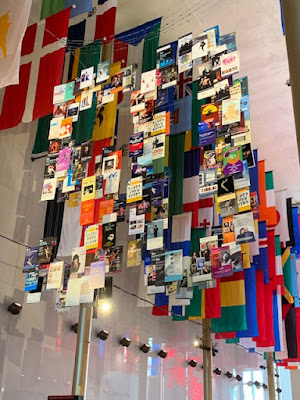 In celebration of its 50th anniversary, the Kennedy Center has hung historic programs and playbills in the shape of a big "50" from the ceilings of its Hall of Nations and Hall of States/Photo by Patricia Leslie
The mezzo-soprano, Isabel Leonard and the NSO mesmerized the house with four Leonard Bernstein selections, my favorite, Take Care of This House, from 1600 Pennsylvania Avenue*, a production of which I was unaware, but the lyrics were entrancing, taking me back to last year and the sad preceding times since 2016 when "this house" was occupied by a recalcitrant.
Although I can't take West Side Story in any shape, form, or fashion anymore (too overdone), Ms. Leonard's rendition of Somewhere struck a chord in my cold heart, causing me to wonder for a few seconds about my objection. Still, I can hear Ms. Leonard.
Other Bernstein selections were Greeting and Lonely Town.
You had to wonder who was in charge of the evening's program since some choices didn't seem to promote the night's message, likely because I was unfamiliar with Mother and Child by William Grant Still, sweet dullness that it was.
In addition to Copland and This House, my top three included James Lee III's NSO-commissioned An Engraved American Mourning which premiered Friday. Stunning in its absolute accurate portrayal of the wrenching emotions we endured that terrible day beginning with sad horns, the tension and bombastic percussion clashes, strong participation by the xylophonist followed by "sirens" and bells, to close with a harpist's strings on a rainbow of hope on a clear sky.
The evening featured more bells, at least double the number  of any performance I have attended. It was the time.
Both orchestras joined to splendidly present This Land, God of Our Fathers, and America, the Beautiful to send us out on a high note in search of national unity. (Once Irving Berlin's God Bless America sufficiently separates itself from Kate Smith, or the PC tide rolls differently, that song may rejoin the retinue of national hymns.)
Also on the program was a poem, Dispatches from Radar Hill by Angela Trudell Vasquez, read by Shirley Riggsbee.
* It's no wonder the title is unfamiliar: According to  Wikipedia, its reputation is chiefly as "a legendary Broadway flop." It lasted only seven shows, and sadly, was Leonard Bernstein's last Broadway score. It played briefly at the Kennedy Center in 1992.

Take care of this house
be always on call,
for this house is the home of us all.

patricialesli@gmail.com
Posted by Patricia Leslie at 10:14 PM No comments: