'Daughters of Yalta,' a must for Russian and WWII history buffs 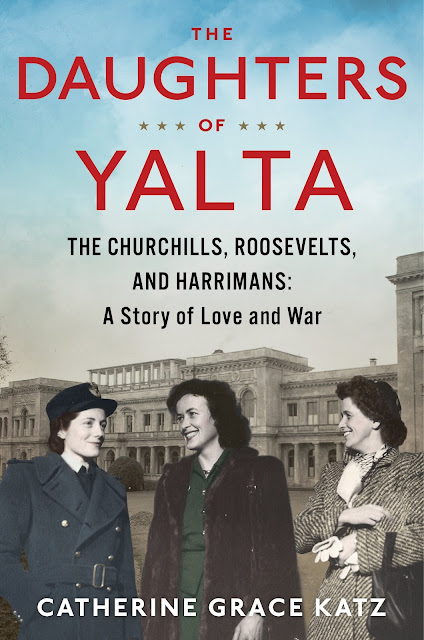 Sex, lives, and history are all parts of the sagas in Daughters of Yalta: The Churchills, Roosevelts, and Harrimans: A Story of Love and War by Catherine Grace Katz who describes the lives of three young women who attended the 1945 Yalta Conference with their dads, British Prime Minister Winston Churchill, President Franklin D. Roosevelt, and Averill Harriman, the U.S. ambassador to the Soviet Union.

The conference was a meeting of Great Britain, the U.S. and the Soviet Union, considered the "Big Three" World War II allies, to discuss strategies on Russia's Black Sea for the ending of the war and what to do with Poland and Germany.
For those who may not be historians like I am not, the book sheds light on the ending of WWII and the division of Germany and how countries' borders are sometimes determined as much as cutting a pie to pieces.

The Daughters were Sarah Churchill, 30, who later became an actress; Kathy Harriman, 27, who lived with her dad in Moscow for several years before Yalta and spoke fluent Russian which came in handy at the conference; and Anna Roosevelt, 38, who constantly worried about her father's health. (He died two months after the conference ended.)

The book details the day-to-day (sometimes hourly) activities the trio enjoyed (or tolerated): their day trips, room arrangements, negotiations, love affairs, late nights and social hours with fine descriptions of meals including a Russian dinner which started at 9 p.m. and ended at 1 a.m., with 45 toasts, 20 courses (fried horse mackerel was one dish), 24 male guests, and Mss. Churchill, Harriman, and Roosevelt.


(The Russians always tried to outdo themselves with huge splashes of generosity, omnipresent vodka and the modernization of a Romanov palace for use as lodging at the conference.)

The Americans and Russians expected their rooms were bugged. They were. Soviet spy Alger Hiss, a representative of the U.S. at Yalta, figures predominately in the book.

FDR worked hard to preserve his relationship with Stalin which Churchill resisted. The Americans and the British wanted to stop Russia from overtaking Poland to also serve as notice for other East European nations.

FDR worked out a secret agreement with Stalin for the Soviets to declare war in the Pacific which they did two days after the U.S. dropped the bomb on Hiroshima August 6, 1945. The Japanese surrendered August 15, 1945.

President Roosevelt and Prime Minister Churchill both believed the conference was a success but worldwide criticism began almost immediately when it ended. French leader Charles de Gaulle was furious France was excluded from Yalta.

FDR looked exceedingly ill at the conference, and his constant smoking exacerbated his condition. When he died, Moscow honored his memory by hanging red flags with black borders throughout the city.

At the Washington History Seminar where Ms. Katz delivered her book in rapid-fire delivery last month (possibly trying to get as much in before her time expired), Allida Black, an Eleanor Roosevelt scholar and a panelist on the program asked Ms. Katz why she had mostly ignored ER in her book which Ms. Katz denied, but I have to agree with Dr. Black. Unlike the roles played by Clementine Churchill and Marie Harriman, mothers of the other two "daughters," "ER" commands little space.

Until I got going in the book, I thought (and hoped) Joseph Stalin's daughter, Svetlana Alliluyeva, might be one of the main characters; nyet.

And it's hardly likely she would have been, said Serhii Plokhii, a professor of Ukrainian history at Harvard and another panelist at the WHS presentation.

At the time of the Yalta Conference, according to Dr. Plokhii, Svetlana was only19 and hardly one to be supported by her dad. Although she did speak English, she was traumatized as a teen to learn her mother had died from suicide. Svetlana had married in her teen years, and her father refused to meet the groom. It was not the best of times for father and daughter's relationship.

Neither Wikipedia nor History.com have any mention of the daughters on their Yalta pages nor does History.com list Averill Harriman.

Unfortunately, it wasn't until the end of the book that I discovered the listing of key delegates, but I found myself often using the essential map showing the lodging locations and the Black Sea and the Allies' meeting place. Thank you, author and publisher, for including!

It was difficult at times for me to keep the three women separate, and more in-depth biography about each at the beginning of the book would have helped and referencing them by whole names instead of first names only.

The book doesn't end with Yalta: Ms. Katz fills us in on the lives of the three women until their deaths; some, sad; some, happy and glamorous as is life, told in Sarah Churchill's autobiography Keep on Dancing, published in 1981, the year before she died, in Christopher Ogden's biography of Pamela Harriman, Life of the Party; and among the pages of Mother and Daughter: The Letters of Eleanor and Anna Roosevelt, edited by Bernard Asbell.

Biographies of Ms. Harriman and Ms. Roosevelt have yet to be published.

For the second Daughters' edition, I wish for photos of Clementine Churchill and Marie Harriman.
Ms. Katz said the publisher, Houghton Mifflin, became interested early on in her book and paid her expenses.  She spent 18 months conducting research, she said at the WHS, and 18 months writing.
patricialesli@gmail.com

Posted by Patricia Leslie at 11:40 PM No comments:

No box office success for 'Nomadland'

(This is not to knock the people who live and enjoy this lifestyle. This is about the movie.)

To each her own.

Whatever floats your boat.

Pandemic or no pandemic, the movie house hosted all of three people on a Saturday night, and there's a reason for that!

Carla, preserve your marriage with Thor and don't dare drag him to see this.

Why pay to sleep when you can do that at home?

This is another one of those flicks made for the critics, much like that awful cat movie by the Coen Brothers, one of whom happens to be married to Frances McDormand, the star and Nomadland co-producer. (I can just see the family sitting around a home bonfire and discussing how they will make their next joyless movie, like Woody Allen's which continue to bomb.)

Talk about a downer. This has got it all. The only thing missing was an attack or some other act of violence coming in the middle of the night which would have pumped up the adrenalin, at least a little.
In-between walks in the desert to contemplate dust, "Fern" urinates, she defecates (and where shall we put it?  There's actually a discussion of this!), and swims naked.  Naturally!  Where would a good art film be without the de rigueur full-frontal female nude?  Where's the male nude?
It would have been difficult to make Ms. McDormand look much worse than she does here, but I'll bet the makeup artist for Nomadland had nomakeland to apply, if one were even one hired for the show. Why bother?
Nomadland  has a few redeeming qualities like the music (by Ludovico Einaudi), the harsh and dry Western scenery (to match the dormant life of the protagonist), and the looks of David Strathairn, the faux S.O., a fantasy who is too nice, too perfect, too considerate to be real. (I mean, come on writers: Show a little life!)

Towards the end when "Fern" walks along a big, rocky coast with leaping, crashing waves jumping up to grab her, all I could wish was that she would just go ahead and jump in so we could escape early.

Posted by Patricia Leslie at 7:50 PM No comments: 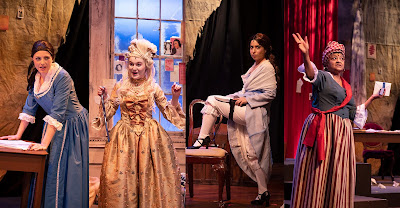 From left: Justine Summers is Olympe de Gouges; Sophie de Waal, Marie Antoinette; Melanie Kurstin, Charlotte Corday, and Dayalini Pocock, Marianne Angelle in Little Theatre of Alexandria's The Revolutionists/Photo by Matt Liptak
It's back to the past.

If it had not been 10 p.m., if it had not been another cold night, I was ready to join other audience members so moved as I to take to the streets and demand change and action, following the powerful message delivered from the stage of the Little Theatre of Alexandria.

The actors were The Revolutionists; the time was 1793 during the height of the French Revolution's  Reign of Terror, but it could have been today when a quartet of unlikely acquaintances gather to urge a playwright to compose a work of what she wants, not what she knows.

Yes, a play within a play with a timeless statement on issues which vex us more than two centuries later. 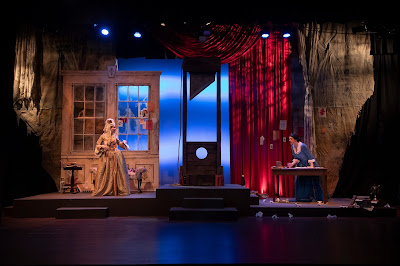 The women argue about the play's content while Olympe de Gouges (Justine Summers) tries haphazardly to write and seize the moment.

A  realistic guillotine is the centerpiece of the sophisticated set with a long red drape hanging nearby ("better to capture your head, my dear") and a floor increasingly littered by the playwright's tossed drafts.  Steps add dimension to the scenes, changed only by the actors who prance in and out, often mad at their world and screaming, just to be sure you get the message.

Director Jennifer Lyman writes in program notes that she chose Revolutionists because she's a fan of the playwright, Lauren Gunderson ("the most produced playwright in America two seasons" before Covid-19 shut theatre doors). But Ms. Lyman hesitated to recommend it to LTA because of its "kick-ass, girl-power, meta-theatrical, modern, irreverent, anachronistic, political feminist" mindset. (Weak men need not attend.)

Marianne Angelle (Dayalini Pocock) is a Haitian fictional rebel, the smoothest of the lot, who, much like a mother, tries to stabilize the group with reason v. emotion.  while screams and yells abound, and shouts for the need to kill fill the stage. (Charlotte Corday [Melanie Kurstin] succeeds.) 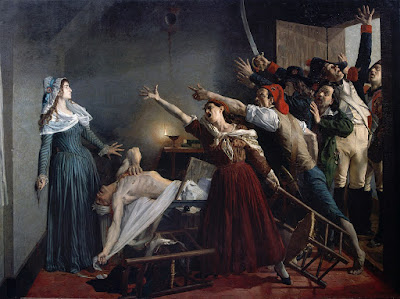 And just when you think serious might overtake the script, in waltzes the frilly, the silly Marie Antoinette (Sophie de Waal)  with a petit trianon voice to match her persona and gown, and hair (by Chanel Lancaster) as high as Marge Simpson's.

Her boudoir with Versailles's elegant windows help embellish the queen's role and reputation.

Costumers Jean Schlichting and Kit Sibley dress the characters in fashionable floor-length gowns of the period in colors and styles to mirror their personalities (dull for the playwright, smart for the Haitian, white for the killer, lacy for the queen).

Sound designer David Correia, assisted by Will Gregg and Donna Hauprich, handle their multiple assignments exceptionally, busy they are all evening with chants,  sprinkles of Les Miserables music, crowd noise, and the ka-chunk, thunk of the guillotine as it falls upon the heads of the victims.

Lighting changes are right on time, illuminating the stage with bright red every time a prisoner steps up to the chopping block, or for the few moments when a solo light is needed.

Today I can take pen or computer to compose my message to those around me, including legislators, and "march" on paper and keyboard to demand change and action to advance equality for women. As of this writing, the long-ago Equal Rights Amendment has risen from the dead to claim new status and perhaps an extended deadline which, if allowed, may ratify a new constitutional amendment.  Amen, sisters!

Have we come a long way?

Congratulations to LTA for stepping outside the box to present a kick-off to Women's History Month, continuing the women's revolution.

What: The Revolutionists by Lauren Gunderson

Adult language
Duration: About two hours with one five-minute pause.

Parking: On the streets and in many garages nearby with free parking at the Capital One Bank at Wilkes and Washington streets.

Posted by Patricia Leslie at 10:46 PM No comments: