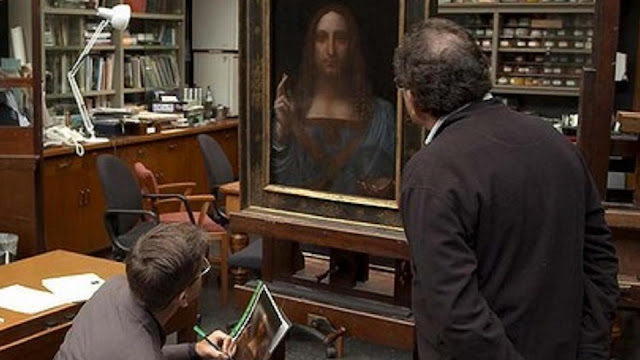 Is it or is it not The Lost Leonardo?/Sony Pictures Classics
That The Lost Leonardo received a 100% audience rating at Rotten Tomatoes (and 95% by the critics) on the day I looked at RT tells you it's got to be good, right? * 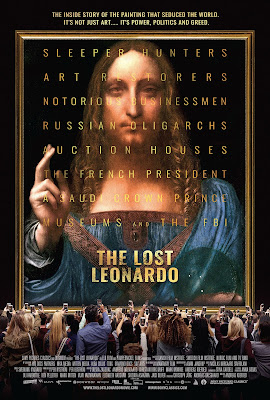 From The Lost Leonardo/Sony Pictures Classics
It's a documentary, sure; my favorite kind, laid out in chronological style beginning with the discovery in a New Orleans art house of the so-called Salvator Mundi by Leonardo da Vinci and following its trail to the present owner who is...?

And where is it now?

Before the Lost (the Last?) sold at a public auction at Christie's in 2017 for the most ever paid for a painting ($450.3 million), it was part of a Leonardo exhibition in 2011-12 at London's National Gallery, yet was pulled at the last moment from a Louvre showing in 2019 when, according to rumors, the present owner demanded it be placed adjacent to the Mona Lisa. Also, a Louvre publication about Salvator was removed from its shops and publication, denied.

Find out at the show!

Andreas Koefoed, the director, performs a marvelous feat, bringing it all home in this balanced portrayal. How he and the producers coaxed the consultants, the "experts," the critics, the sleuths, the government officials and more to settle for his camera is a story in itself, but he did, and they are all happy to share their opinions.

Their names and identifications (titles) are listed in the bottom left corner of the screen, an indispensable aid for those of us who do not circulate in their worlds and must profess ignorance of most of them.

Who had an ax to grind?

Is it an original da Vinci?

That a world-known criminal is involved is revolting and maybe, that's what his subjects will do...one of these day.

Mr. Koefoed co-wrote the story with Duska Zagorac, Andreas Dalsgaard, Mark Monroe, and Christian Kirk Muff. Hats off to you!  Music by Sveinung Nygaard is excellent.
For more reading, Wikipedia has a lengthy accounting of the painting's provenance.
*Now, the audience gives it 93% and the critics, 95%.

Posted by Patricia Leslie at 11:11 PM No comments:

Come with me to the fair... 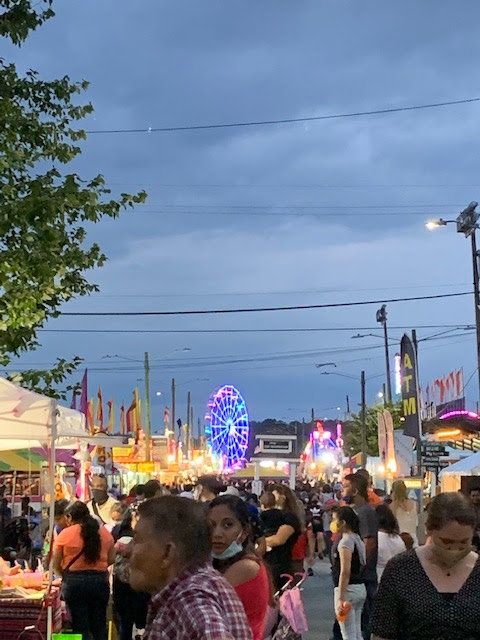 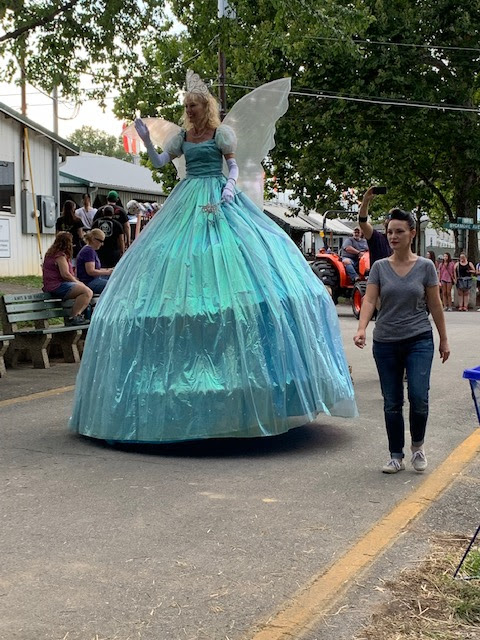 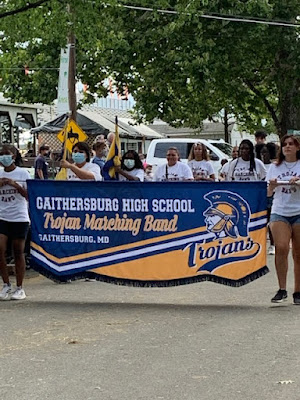 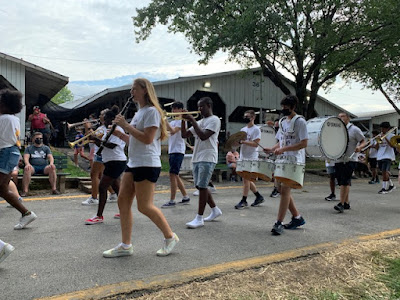 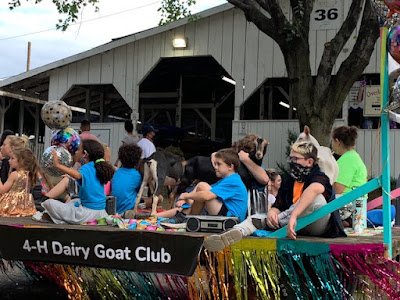 Can you imagine riding a float and hugging a live goat at the same time?  In a parade?  It happened at the Montgomery County Fair/Photo by Patricia Leslie 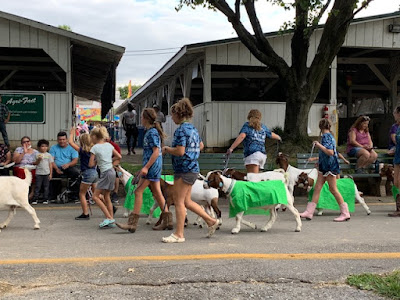 These little fellows were "meat goats" which means that, maybe, ....yep.  They marched in the Montgomery County Fair Parade. Maybe, their last walk on the plank before, you know, ..../Photo by Patricia Leslie 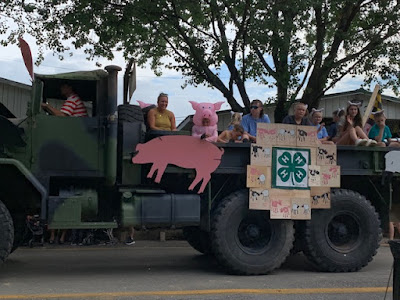 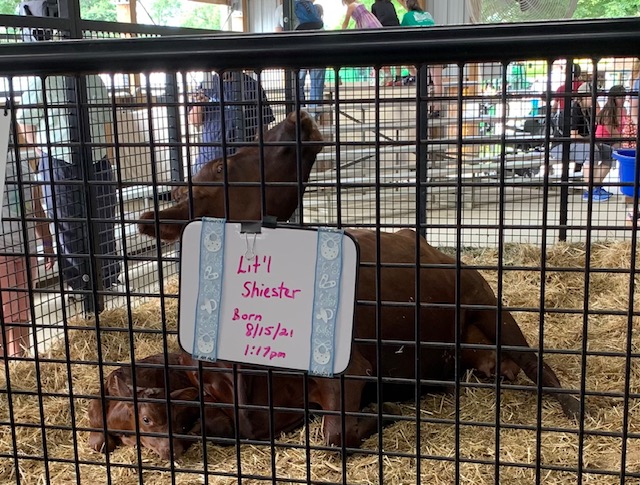 How would you like to be born under the eyes of total strangers?  It happens often at the Montgomery County Fair when "Lit'l Shiester" was only three hours old when she was pictured here.  What a generous little calf and mom to be so tolerant of the curious!/Photo by Patricia Leslie 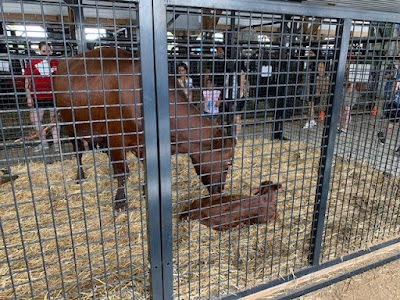 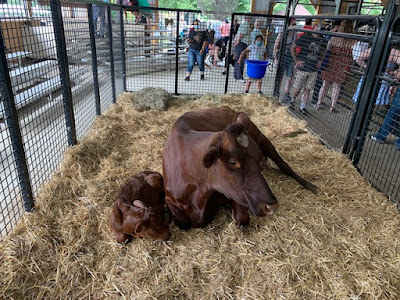 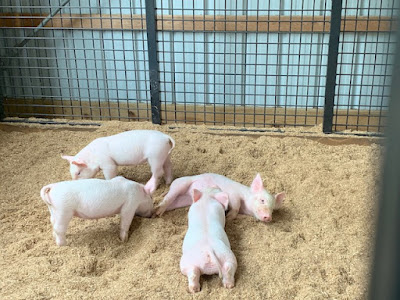 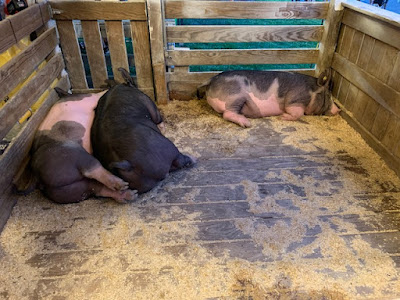 And for these  B I G  piggies, it was time for some shut-eye at the Montgomery County Fair/Photo by Patricia Leslie
It was the Montgomery County Agricultural Fair with lots of fun, lots to see, and whole lotta to eat!
There were piglets and pigs and cows and calves and maybe, 6,000 kinds of rabbits.  (You could buy one rabbit for about $80 and some rabbits had pedigrees!  Rabbits?  Pedigrees? You've seen one rabbit, you've seen them all!)
Time to moo (can't resist) on to the cows and cows and  more cows which were about as numerous as the rabbits, but not so much.  (Sorry, rabbits and rabbit lovers.)
How would you like a group of strangers watching your birth?
It must be a medical school training lab!  Nope, it was at the fair where poor "Lit'l Shiester" and her mom had to endure a crowd watching her enter the world.  Take a gander of that!  And humans think they've got it rough when they deliver a ten-pounder.    R i g h t t t t t t .... Lit'l Shiester weighed a whole lot more than ten pounds!
With animals galore, there was alcohol, too (in tents), and whatever you do, never forget the funnel cakes and fried oreos which were plum delish (6 for $8)!  I don't even like oreos but these I had to try and they were wonderful, to melt in my mouth, all that gooey chocolate surrounded by empty air puffs of sugary dough.  I am still flying high from eating them many days ago.
Tickets to the rides were $1.50 multiplied by about 4 ($6) which is about the average cost except for the really big ones which go for more.  The swings were, actually, kind of boring but the pirate's boat was scarier than it looked, so much so that Marie cried to get off, but there was no stopping us when we got up real high, and she just had to cry and bear it.
Admission - It varied. Next year the price will be different.
Parking was free at Lakeforest Mall and free school bus shuttles at the mall had wheels to the fairgrounds. No waiting! Plenty of buses; plenty of room. Highly organized.
Restrooms - with attendants and fairly clean (for a fair!).
Come one!  Come all (next year)!  To the greatest DMV fair before fall!  (I had to make it rhyme.)
patricialesli@gmail.com
Posted by Patricia Leslie at 11:57 PM No comments:

Book review: 'The Assassination of Trotsky' 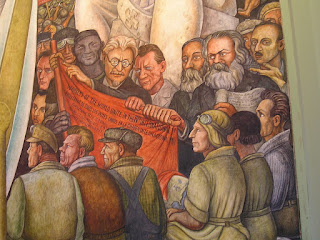 Without emotion or attitude, Nicholas Mosley gives a "blow-by-blow" account of the murder of Leon Trotsky (1879-1940), between the time of the first assassination attempt on his life on May 24, 1940, and the last, successful one when he died the day after being stabbed by an ice pick*, August 20, 1940.

Regrettably, Mr. Mosley's documentation is omitted, save for the short bibliography at the end with six titles listed. The best insight into the person is  Trotsky's autobiography and his writings, Mr. Mosley says. 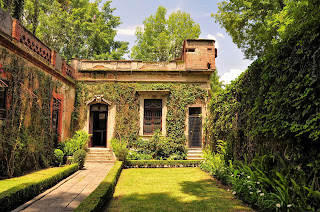 Leon Trotsky House where he was stabbed and where he lived from April, 1939 - August, 1940 Mexico City/Photo by Rod Waddington, Kergunyah, Australia, Wikimedia Commons

Mr. Trotsky left "works of some genius"; he was "a man with a marvelous literary eye and style," Mr. Mosley writes.

I ran across the book title in the Wall Street Journal's column by Peter Stothard of the "Five Best [Books] on Political Vengeance," and per usual, the best library, the Fairfax County Library, got it for me on interlibrary loan.

The book is short (184 pages) and a fast read, written in 1972 in the "encyclopedic" style when Trotsky's grandson, Seva, was still living in the house.

The first attempt on Trotsky's life saw about 20 assassins invade his home and shoot up the house (bullet holes, extant). Trotsky, his wife, Natalie Sedova, and Seva, miraculously survived without severe injury (Seva was shot in the foot while hiding under his bed) causing the chief of Mexico's secret police to question whether the attempt was fake and even happened.

Later that summer, bodyguards surrounding the house were lulled by the familiarity of a Trotsky acquaintance, a secret Stalinist, who arrived at the house on August 20 to discuss "a document" with "the old man" but stabbed him instead.

The murderer had several names and backgrounds: Jacques Mornard, Frank Jacson, Ramon Mercader. At the time, Mexico had no death penalty, and he was sentenced to 19.5 years for premeditated murder and six months for illegal possession of arms.

Later, his parole request was rejected because the killer was considered "socially dangerous," and the courts decided it was hard to grant parole to a person "if no one knew officially who he was."

Trotsky lived until the next day when he died at a hospital. When it lay in state, an estimated 300,000 filed past his body.

Lenin had ostensibly "appointed" Trotsky his successor of the Soviet Union. Stalin was "rude" and unpolished, rough like the countryside, his origin.

Chasing Trotsky, his greatest rival, throughout Europe, Stalin delayed Trotsky's execution for years to avoid public fallout. After all, it was good public relations to keep him alive and have a scapegoat; Stalin could blame him for everything: the wheat crop failure, the pig swine fever, railway problems, factory destructions, even "nails in butter"!

Trotsky knew he was a targeted man. 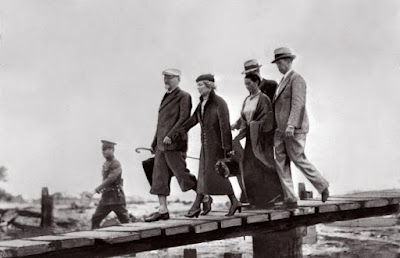 Trotsky and his wife, Natalia Sedova, arrive in Mexico, January, 1937, with Frida Kahlo behind them/Photo by unknown author, Wikimedia Commons

Eventually, after their itinerant European residencies, Trotsky and his wife found their way to Mexico in 1937 and the home of Frida Kahlo and Diego Rivera, the latter who claimed credit for getting them admitted to the country. (After Trotsky's death, Rivera, man of honor that he was, said he was working for Stalin to lure Trotsky to his death site.)

The Trotskys lived with the artists for about two years until, several stories go, Rivera flirted with Trotsky's wife (and vice-versa) which, combined with political disagreements, ended the happy arrangement.

American supporters helped raise money for Trotsky's last residence which became the scene of the murder. 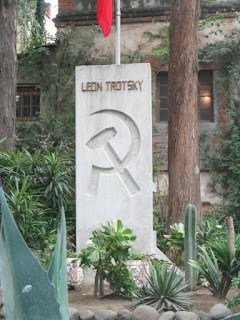 Leon Trotsky's grave in Coyoacan, Mexico City/Photo, Wikimedia
His ashes and those of his wife, who died in 1962, are entombed at the Coyoacán house, open now as a museum.
The Trotsky home is definitely on my "must see" places whenever I get to Mexico City.
*It is on view at Washington's International Spy Museum.  The weapon was missing for several decades until it was found under a bed and went on the market.

Posted by Patricia Leslie at 12:21 AM No comments: