Olney's 'Thurgood" lays it out in black and white 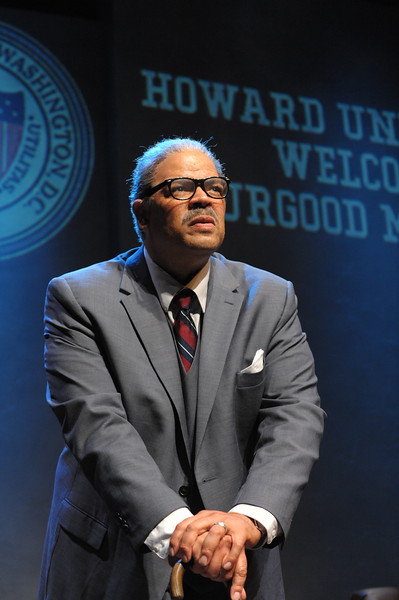 If I were a high school political science, American history or civics teacher, I would require my students to see Thurgood and write a paper about what they saw and learned.

We don't know enough about American history and critical events of 50, 60 years ago, but George Stevens, Jr.'s Thurgood now onstage at the Olney Theatre Center offers a glimpse of what was happening in the civil rights arena.  It is shameful. 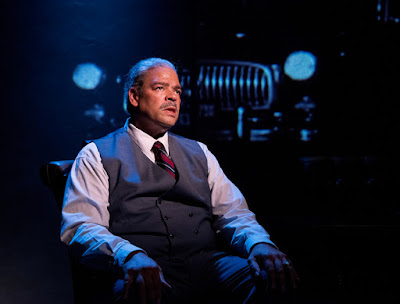 Powerful and domineering, Wilson enters the stage in a three-piece suit, of course, bent at an almost 45 degree angle and aided by a cane.  Over time in the production, he removes his coat and gradually straightens up as he regains his youth, shedding years as he returns to that time of his life and tells some stories.

Wilson never fails to convince us that he's the man, taking audience members to what one wishes were a far-away land, that these things didn't happen, that it was a nightmare no one lived, and yet, they did.  It is easy to forget who is in the landscape.

In his law practice and as head of the NAACP's Legal Defense Fund, Thurgood Marshall successfully argued 29 of 32 cases before the U.S. Supreme Court, including the most famous, Brown v. Board of Education of Topeka in 1954 which the Supreme Court unanimously affirmed "separate but equal" public school facilities were unconstitutional, overturning Plessy v. Ferguson of 1896.

Swearing in Marshall to the Court was Justice Hugo Black, a former member of the Ku Klux Klan. Marshall served 24 years and retired when his health declined. One of his law clerks was current Supreme Court Justice Elena Kagan.

The show's excellent set design appears at first rather orderly and serious, like a courtroom where Justice Marshall spent much of his life, with four leather chairs, a rectangular table, a podium, the American flag, and the flag of the District of Columbia, the home of Howard University where Mr. Marshall attended law school after the University of Maryland rejected him because of his race.

(Lest anyone forget about its famous alumnus, a big banner proclaims "Howard University Welcomes Thurgood Marshall.")

While Justice Marshall describes his life, scenes from his past with important characters flash for a few seconds on the big, grey wall behind him.

Sound is critical, and everything is perfectly timed from the train to the trolley, to the music, to the haunting car's engines and its lights which convey what could have been a violent scene near Columbia, Tennessee.

Lighting is precise as the spotlight follows Wilson from one end of the stage to the other, as he walks, sits, removes his coat, and continues movements and mannerisms.

Some theatregoers may resist a one-man show, but none I have seen have ever failed to disappoint in subject, script, and set. I think of Kaiulani Lee,  captivating as Rachel Carson in A Sense of Wonder at George Mason University, and I wonder why she and Wilson are not on the road 365 days a year presenting their characters and teaching, reminding us about the education and awakening we missed or ignored.

Talkbacks after Saturday matinees on August 5 and August 12.

How much: Tickets begin at $45 with discounts for seniors, groups, military, and students. Tomorrow's matinee is sold out and there is limited seating for many of the remaining performances.

Duration:  90 minutes with one 15-minute intermission

Refreshments: Available and may be taken to seats

Parking: Free, nearby, and plentiful on-site

Posted by Patricia Leslie at 10:12 PM No comments: 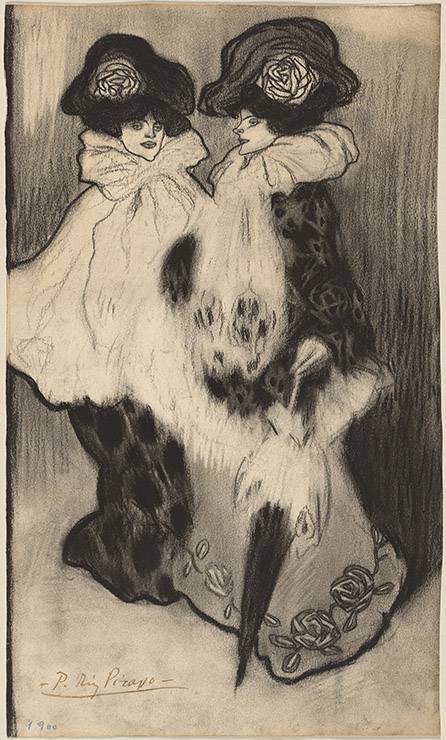 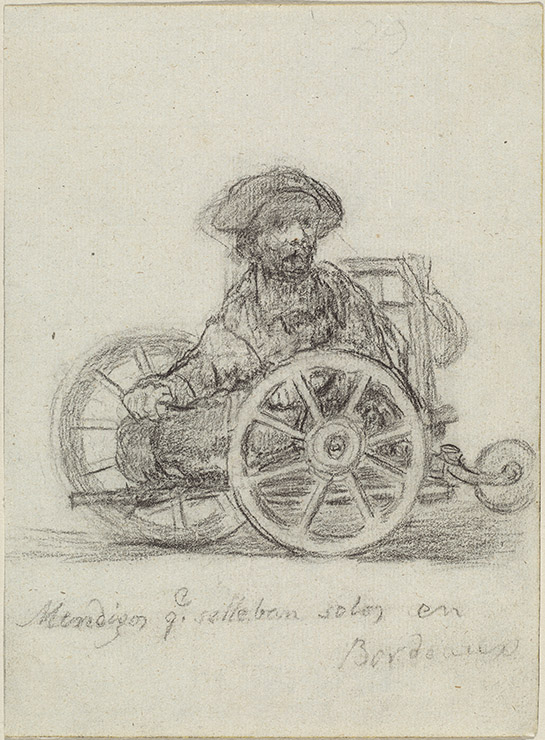 Leonardo da Vinci, Albrecht Dürer, Raphael, Jean-Auguste-Dominique Ingres, Edgar Degas, Rembrandt van Rijn, and Pablo Picasso are some of the artists represented in the Woodner Collections, 106 drawings now up for only one more day at the National Gallery of Art. 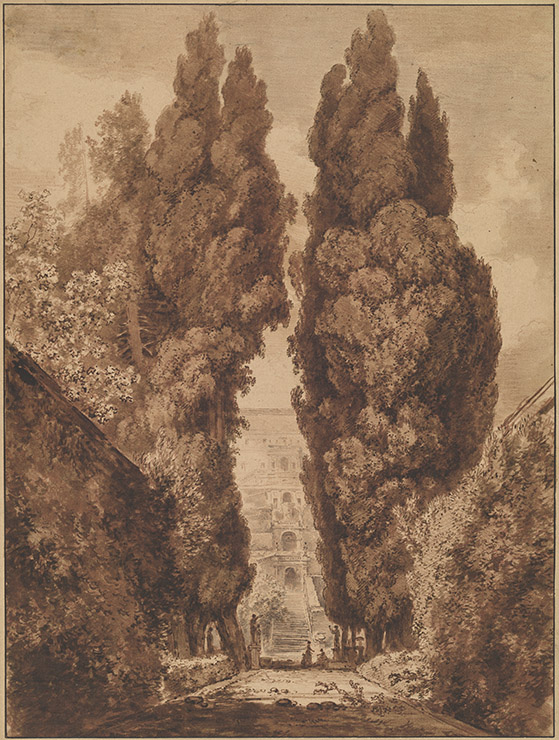 The 1000 works in the National Gallery's collections from Ian Woodner (1903-1990) and his daughters, Dian and Andrea, cover seven centuries, starting from around 1340 A.D. and ending with the 20th century. Some pieces are promised gifts to the Gallery.

The show stretches over several galleries, beginning with the Italians, then, the 18th and 19th centuries, 19th century watercolors, and beyond. 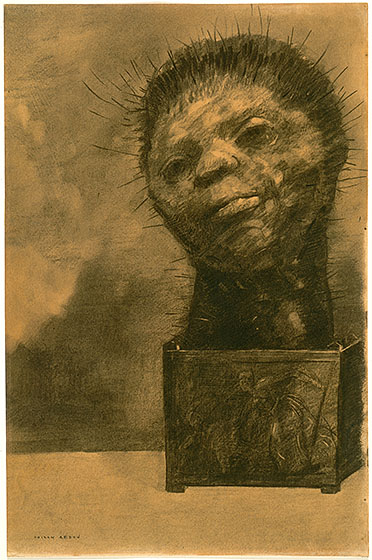 Mr. Woodner, a successful real estate developer, was an artist himself who began collecting in the 1950s.  In his professional career, he helped design the Central Park Zoo and 1939 World's Fair buildings, and later he turned attention to development of residential and commercial properties in New York and Washington. 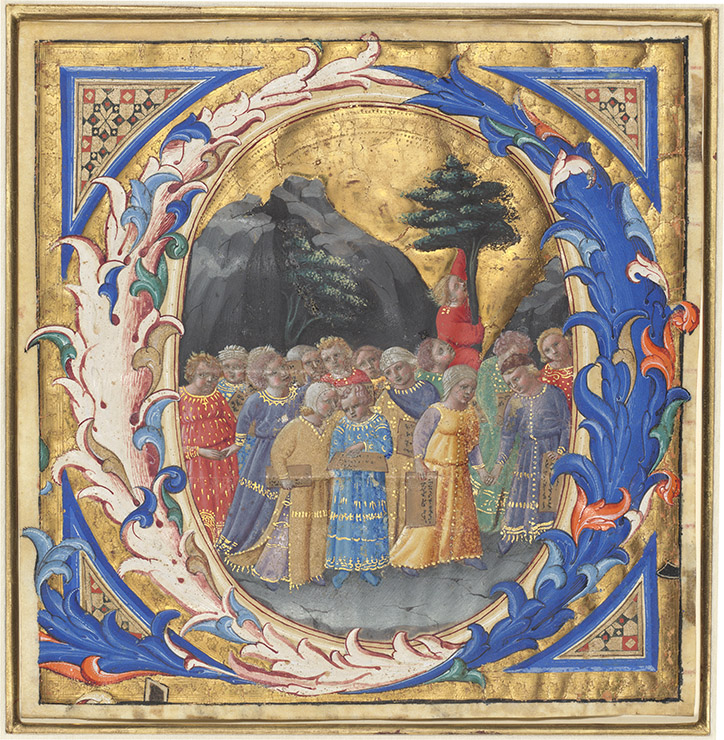 His watercolors and pastels enjoyed exhibitions in New York, Munich, London, Madrid, and Jerusalem. At the Woodner Apartments in Washington, some of Mr. Woodner's works may still be seen in the lobby.


What: The Woodner Collections:  Master Drawings from Seven Centuries

Where: The ground floor of the West Building, the National Gallery of Art, between Third and Ninth streets at Constitution Avenue, N.W., Washington, D.C. On the Mall.


Posted by Patricia Leslie at 11:57 PM No comments: 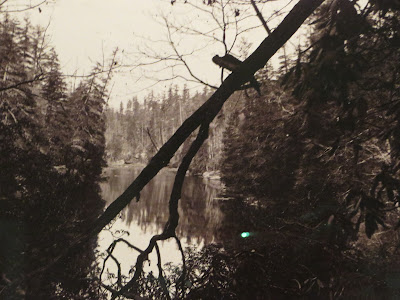 Edward H. Fox, 1851-1919, On Clear Fork, Rugby, Tennessee, 1880s.  From the collection of William L. Schaeffer.The label describes Rugby as a utopian coummunity established for British boys who were ineligible to inherit family estates due to primogeniture. A new railroad to Chattanooga permitted the viability of the town which still exists!

See America's 19th century history in 175 pictures on display through Sunday at the National Gallery of Art.

East of the Mississippi: Nineteenth-Century American Landscape Photography is the first show of its kind to focus on the Civil War century and its aftermath, not only in city scenes, but in visuals from  the country, too. Lenders to the exhibition include 42 collectors, museums and libraries from the U.S. and Canada. 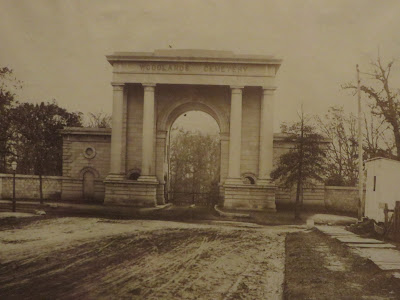 James E. McClees, 1822-1857, Entrance to Woodlands Cemetery, The Library Company of Philadelphia. This Philadelphia cemetery was like many of the era when citizens enjoyed the grounds like they would enjoy a park.  They relaxed and picnicked. 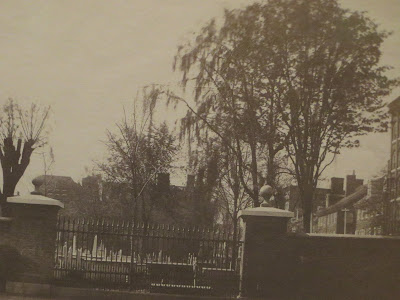 Frederick DeBourg Richards, 1822-1903, The Hole in the Wall, 1859. Black Dog Collection. The "hole in the wall" was fencing installed to permit passersby opportunity to see Benjamin Franklin's grave at Christ Church, Philadelphia.

The National Gallery of Art organized the exhibition in association with the New Orleans Museum of Art. With Yale University Press, the museums have published a catalogue of 288 pages with 220 color illustrations available in the shops. 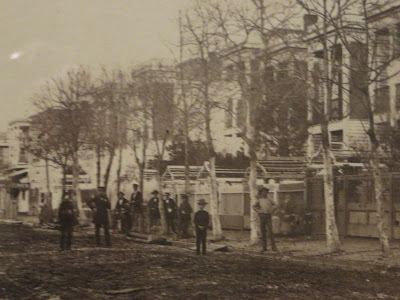 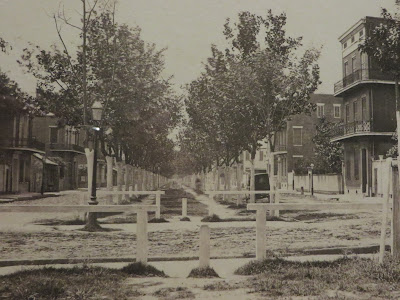 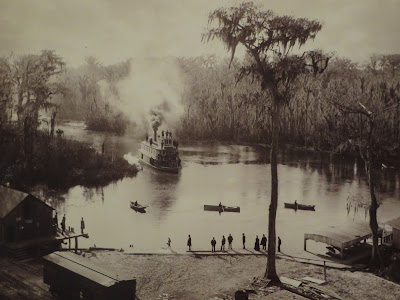 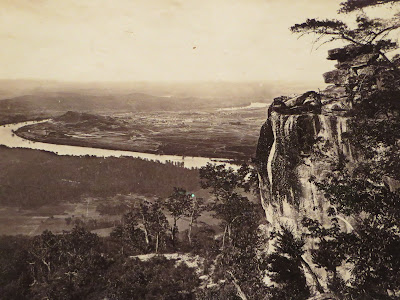 After the National Gallery, the exhibition moves to the New Orleans Museum of Art where it shall be up from October 5, 2017 through January 7, 2018.

The National Gallery's Diane Waggoner was curator. Support from the Trellis Fund and Kate and Wes Mitchell made the show possible.


What: East of the Mississippi: Nineteenth-Century American Landscape Photography

Where: The ground floor of the West Building, the National Gallery of Art, between Third and Ninth streets at Constitution Avenue, N.W., Washington, D.C. On the Mall.


Posted by Patricia Leslie at 11:52 PM No comments: 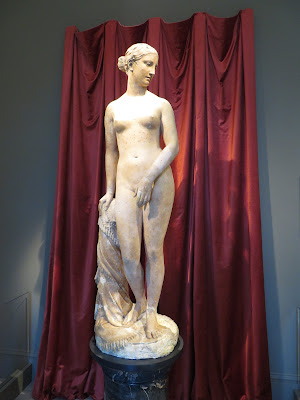 This life-size plaster cast was completed in Hiram Powers' Florence, Italy studio on March 12, 1843 from a clay model, and it served as the prototype for six marble statues which sculptors, working under Powers' watchful eyes, carved for patrons between 1844 and 1869. 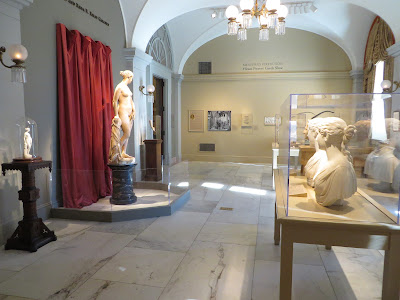 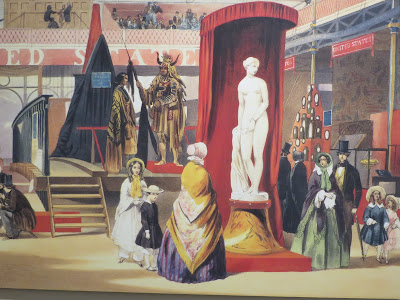 Six million visitors toured the 1851 international fair in London where the Greek Slave rotated on a pedestal, the first time an exhibition allotted a section to the U.S. (The American portion included a teepee, Indians [seen in the background], portraits of presidents, and a cylinder engine.) This rendering is from a hand-colored lithograph at the Library of Congress/Photo by Patricia Leslie 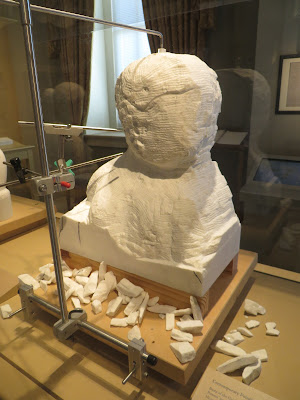 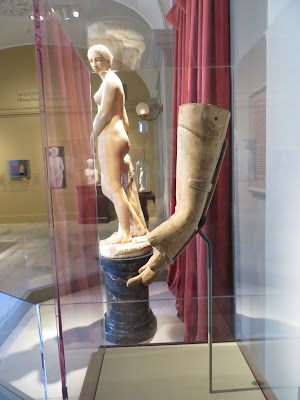 Life Cast of Left Forearm and Hand, fragment, about 1843, plaster, from the studio of Hiram Powers, Florence, Italy, 1837-1873/Photo by Patricia Leslie. The model for this cast is unknown but using a cast instead of modeling was verboten among sculptors. This model identically matches the Greek Slave's hand's and arm's dimensions and positions.

Catch her before the Greek Slave, "one of the best-known and critically acclaimed artworks of the nineteenth century," leaves display at the Smithsonian American Art Museum on Sunday.

With his Greek Slave sculpture, Hiram Powers (1805-1873) became the first American to gain international art acclaim. Powers said his statue represented a young woman kidnapped by the Turks during the Greek revolution (1821-1832). U.S. abolitionists adopted her as a symbol of slavery, and John Greenleaf Whittier and Elizabeth Barrett Browning wrote poems about her. 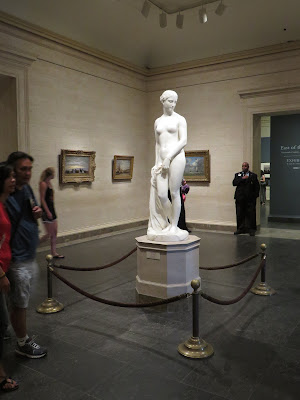 One of the six original marble versions of the Smithsonian's plaster statue is at the West Building at the National Gallery of Art, a gift of William W. Corcoran to the Corcoran Collection/Photo by Patricia Leslie

The Greek Slave was the first publicly exhibited fully-figured nude female who, some venues required, demanded separate viewings by men and women, the Smithsonian notes. Even in this century, she continues to draw controversy and cover-up.

In 2004 Wikipedia says Vermont Governor James Douglas (R) ordered her likeness on a small lamp removed from his office, so afraid he was that children might see her, since it's doubtful that not all knew what a naked woman looked like. 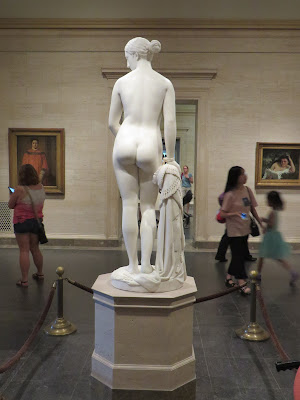 One of the six marble models is at the West Building at the National Gallery of Art, a gift of William W. Corcoran to the Corcoran Collection/Photo by Patricia Leslie

Attracted by Florence, Italy's marble and carvers, Powers, who was born in Woodstock, Vermont, left the U.S. in 1837, never to return as he planned. The Smithsonian acquired the statue and other pieces from his Florence studio in 1968 and at the Smithsonian, the Greek Slave has occupied her own large gallery for almost two years.  One of the six original marbles stands on the ground level of the West Building at the National Gallery of Art which calls it "arguably the most famous American sculpture ever."

She is "an emblem of the trial to which all humanity is subject, and may be regarded as a type of resignation, uncompromising virtue, or sublime patience," wrote the tour manager, Miner Kellogg when the statue toured the U.S.  in 1847 or 1848 (two different years listed by Wikipedia) drawing 100,000 viewers.[6] 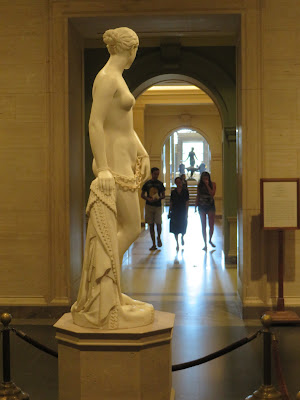 One of the six marble models is at the West Building, the National Gallery of Art, a gift of William W. Corcoran to the Corcoran Collection/Photo by Patricia Leslie

What: The Greek Slave


patricialesli@gmail.com
Posted by Patricia Leslie at 11:48 PM No comments: