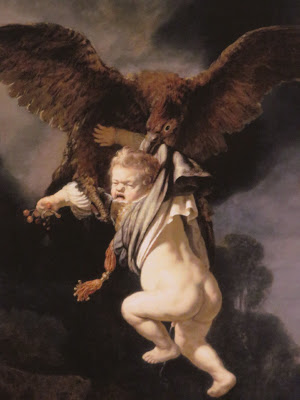 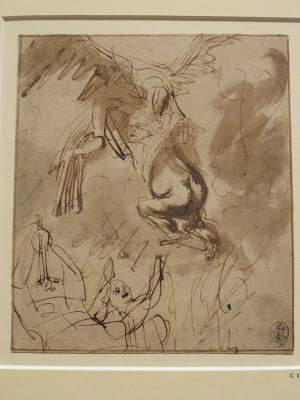 Washington art aficionados who have not seen the exhibition, Drawings for Paintings in the Age of Rembrandt, or who want to go again, have through Monday to view Dutch Golden Age drawings and paintings by 54 artists at the National Gallery of Art before the presentation moves to the Fondation Custodia, Frits Lugt Collection in Paris.

The display of 91 drawings and 27 paintings tells the "stories behind the paintings," said curator Arthur Wheelock at the show's opening. Like an author's or writer's first draft, these are the basis of the artists' last drafts. Said Mr. Wheeler: "The artistic process unfolds." Rather than painting "on site," many put colors and ink to paper in studios after they observed and sketched spectacular scenery, people, and interiors.

Seeing the "befores" and "afters" firsthand provides insight on the ways the artists worked, their methods and practices, what they kept, what they discarded.

Jan van Goyen made sketches of his trips out to the country which later became his landscapes; Pieter Jansz Saenredam used a compass, rulers, and a straightedge to make exquisitely detailed sketches of church interiors. Pieter Molijn completed Landscape with Open Gate, 1630-1635, in the studio after a visit to the Dutch shore where he drew the scene.

The drawing and painting above of Rembrandt's The Rape of Ganymede, both 1635, are a rare instance of an almost complete drawing used by the artist for his finished work.  The catalog notes the final version contained the mother figure only but outlines of both parents at the bottom in the drawing shows the father aiming a weapon at the eagle. In the oil, the child urinates, in shock.  Most artists drew Ganymede as a youth, and not as a baby. Mr. Wheeler said Rembrandt based it on the artist's observation of "a screaming kid being picked up by his parents." 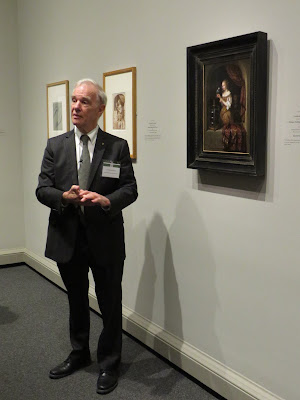 A Woman Feeding a Parrot, with a Page (above and below) by Caspar Netscher became part of Hermann Goering's collection after the Germans confiscated it in 1942 during World War II from the Musees Royaux des Beaux-Arts in Belgium where the owners had stored it for safekeeping.  When the war ended, the painting was purchased by a private collector and eventually was returned only two years ago to the heirs of the original owners. Then it sold at Christie's for $5.093 million to a London art dealer who sold it to the National Gallery this year. 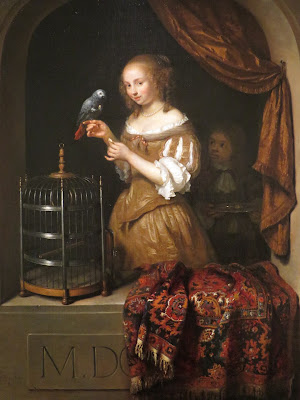 Caspar Netscher, A Woman Feeding a Parrot, with a Page, 1666, National Gallery of Art, Washington 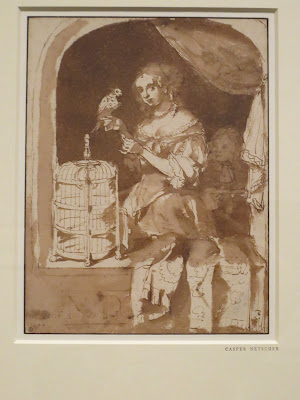 Caspar Netscher, Young Woman With a Parrot, 1666, the British Museum, London. The label says that rather than a study, this is likely a sketch or "ricordo" Netscher drew to hang in his studio as a reminder of the finished product after it sold. Through collaboration and rather than the usual timing of nine months to achieve such a loan, in a flash of a week, the British Museum rushed the drawing to Washington for the exhibition, marking the first time the two works have hung together. 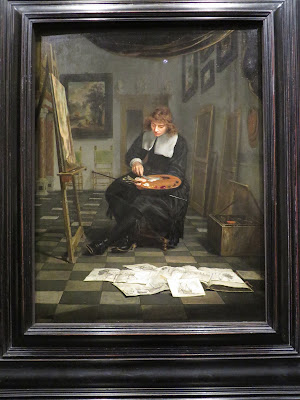 Michiel van Musscher, An Artist in His Studio with His Drawings, mid-1660s, oil on panel, Liechtenstein, The Princely Collections, Vaduz-Vienna. 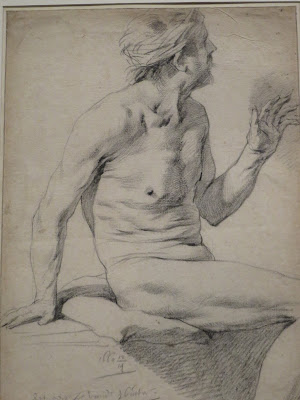 A member of a wealthy family, Leendert van der Cooghen did not need art to survive financially.  Consequently, only three of his paintings, but several drawings and etchings, survive.  He probably painted from life, from models in studios. 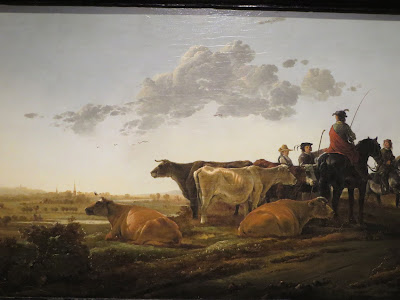 Aelbert Cuyp's landscape (above) was a scene from the Rhine River Valley populated with animals and humans he drew from other sources. 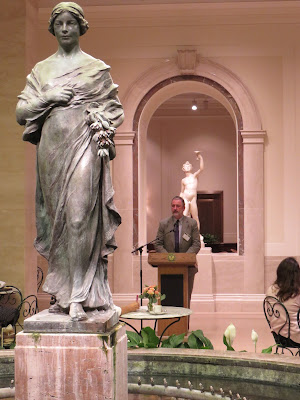 His Excellency Henne Schuwer, Ambassador of the Kingdom of the Netherlands, welcomes members of the press to Drawings for Paintings in the Age of Rembrandt. Joining him in the foreground to welcome guests is Girl with Water Lilies by Herbert Adams, bronze, 1928, gift of the HRH Foundation in memory of Helen Ruth Henderson/Photo, Patricia Leslie

A color catalog of more than 300 pages with essays, history, biographies, bibliographies, and more is available. The National Gallery of Art and the Fondation Custodia, Frits Lugt Collection, Paris organized the exhibition.

What: Drawings for Paintings in the Age of Rembrandt

patricialesli@gmail.com
Posted by Patricia Leslie at 8:10 AM No comments:

American history on tour at the National Gallery of Art 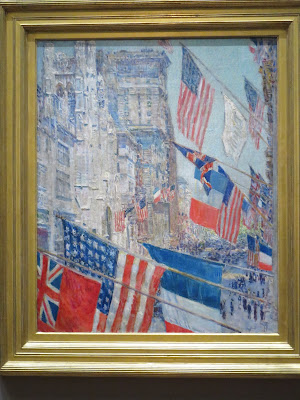 One of several scheduled docent-led tours at the National Gallery of Art is a quick (less than an hour) study in American history which, last Friday, touched on colonial America and ended with the beginning of America's role in World War I and the painting, Allies Day, May 1917 by Childe Hassam (1859-1935). (Gallery 70) 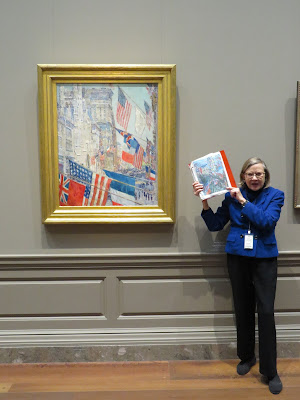 At that last stop on the tour conducted in the West Building, docent Jill Brett mentioned the place in the painting (Fifth Avenue at East 52nd Street in New York City; methinks President-Elect Donald J. Trump would approve!), comparing it to a similar work by the French artist, Claude Monet, which she displayed from a large guide book she carried around during her talk.

Hassam's may be considered America's version of Impressionism, under whose spell, Hassam fell. (I don't know which came first: Hassam's or Monet's, but I would bet Monet's. Here is a link to his complete works, if you can find it which would have the year. Hassam painted his in 1917.) 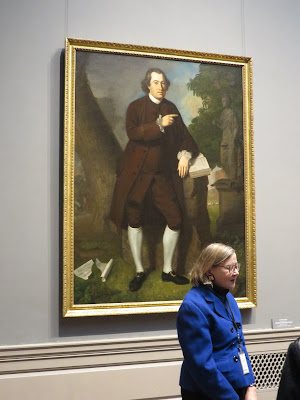 Ms. Brett briefly talked about America's colonial period, and the portraiture in 1770 of John Beale Bordley by Charles Willson Peale (1741-1827). Bordley was a politician and the artist's close friend and benefactor who sent Peale to London in 1766 for training.

In this work found in Gallery 62, Peale highlights America's and Bordley's successful agricultural pursuits and the tyranny Britain imposed on its young upstart which the painting warns will not endure. Crumbled at Bordley's feet is a British document of civil rights, which the Mother Country chose to ignore in its settlement across the sea. 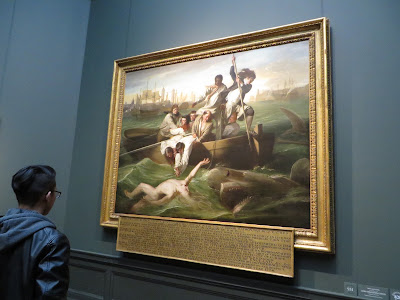 Watson and the Shark, 1778 by John Singleton Copley (1738-1815) in Gallery 60B would make any less-than-art enthusiast take a second look at Copley's interpretation of a true tale about a 14-year-old lad, Brook Watson, attacked by a shark while swimming off the coast of Cuba and losing either:
1. His right foot (National Gallery's description) or
2. His right leg below the knee (Ms. Brett's description. I suppose they could be the same thing because if you lose your right leg first, you put your right foot in and you shake it all about, you do the shark escape and scream for help, that's what t'was all about.)

At the time of the artist's rendering, few had ever seen such violence depicted on canvas. Ms. Brett pointed out that it was a first for a shark with lips, and whatever Mr. Watson lost, the peg leg he wore for the remainder of his life supported his stature as a British merchant and politician.  Mr. Copley was a totally self-taught artist. 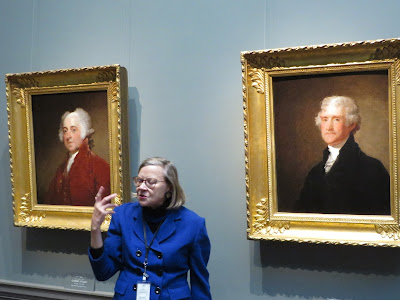 
In Gallery 60A at the trio of American presidents by Gilbert Stuart (1755-1828), Ms. Brett talked chiefly about the contrast between President John Adams (1735-1826), a vain man (Stuart dressed him accordingly), who was born poor and died rich, and President Thomas Jefferson (1743-1826), who was born rich and died poor. (Those of us in Washington, D.C. are reminded daily of  Jefferson's accomplishments which are not necessary to cite here, and of Adams, I shall only say neither he nor his son were elected to a second term, unlike Jefferson who was. Is there a John Adams Memorial in town? Enough said.) 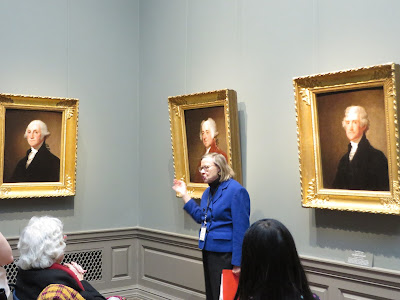 A trio of presidents, all painted by Gilbert Stuart (1755-1828) at the National Gallery of Art, Washington, D.C. From left are Presidents George Washington, John Adams, and Thomas Jefferson, all admiring their brief biographies as told by Docent Jill Brett/Photo, Patricia Leslie


Stuart's George Washington (1732-1799) is one of four owned by the National Gallery and one of 100 or so likenesses Stuart made of our first president, drawn so the artist could make a lot of money which "he spent faster than he made," Ms. Brett said. 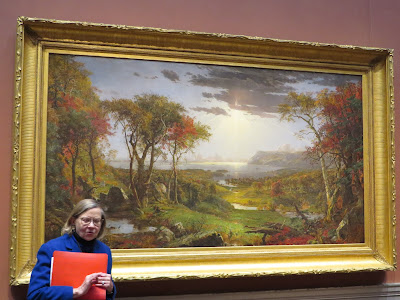 Docent Jill Brett talks about the allegory, Autumn - On the Hudson River, 1860 by Jasper Francis Cropsey (1823-1900) at the National Gallery of Art, Washington, D.C./Photo, Patricia Leslie

Next on the tour (Gallery 64) was an allegory, Autumn - On the Hudson River, 1860, by Jasper Francis Cropsey (1823-1900) who drew the evolution of nature and emerging urbanity, beginning a roll from the left to the right and center of the canvas.  Cropsey painted it from memory in his London studio, and Ms. Brett said Queen Victoria saw it at the Royal Academy.

The artist became so irritated with the British skeptics who doubted his accuracy of the leaves' colors (they are brighter in the U.S.), that he carried actual autumn leaves from the U.S. to the painting in Britain and put them in a vase beside his work! (Attention, Brits: Our leaves are better than your leaves, if color is any measure, and by Trump (!), I say it is!) 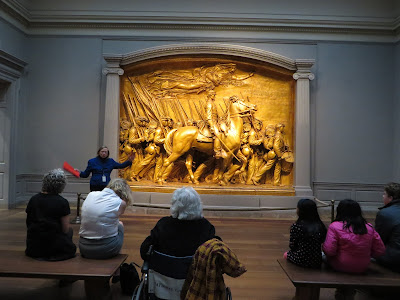 Ms. Brett was certainly not going to bypass the magnificent and glorious sculpture by Augustus Saint -Gaudens (1848-1907) of black soldiers from the Massachusetts regiment going off to fight in the Civil War. Half the troops died at the Battle of Ft. Wagner on July 18, 1863 outside the harbor at Charleston, S.C., including their leader, Colonel Robert Shaw, whose namesake graces "the greatest American sculpture of the 19th century." (Gallery 66) 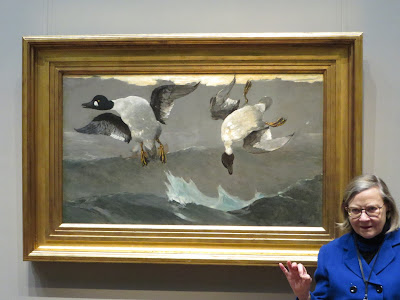 Right and Left, 1909 by Winslow Homer (1836-1910) at the National Gallery of Art, Washington, D.C. with Docent Jill Brett/Photo, Patricia Leslie

Two ducks plunging into a body of water was another stopping point for Ms. Brett whose short explanation about the work was welcome news to me who has wondered about its significance for many years.

In Gallery 68 hangs Right and Left by Winslow Homer (1836-1910) who drew it in 1909, the year before he died, perhaps sensing his own imminent death.  The birds are hunters' targets (surprise!), and, much like our own, their short lives are extinguished in a flash.

Ms. Brett said the work can represent "the last moment of life, the first moment of death."  She pointed out the unusual perspective: We fly with the ducks, which is a fitting place to end this description.  Carpe diem! 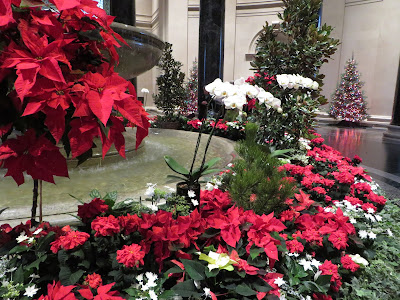 If you take the tour and are so lucky to have Ms. Brett as your guide, you will find a knowledgeable, sincere, and down-to-earth leader who invites and answers questions at the end of every stop.

At each painting, she supplied historical background, significance, and set the stage for what drove the artist to put his brush to the canvas. Timing and context are everything when it comes to art, she said, pointing out shadowed background, and obscured parts undetected by an untrained eye.

The Friday group of about 15 visitors, young and old, American and foreign, expanded and shrunk and grew again as the tour weaved its way in the galleries, picking up interested "passengers" along the way and dropping them off at various points.

American Stories  is one of a series of nine free, scheduled daily tours at the National Gallery which offers other tours in foreign languages, for the hard of hearing and the blind, for school groups, and for the self-guided. You will not be bored.  You will not leave "unlearned." Guaranteed, or I shall pay your next admission.

What: American Stories in Art

Where: Meet at the Grand Rotunda, West Building, the National Gallery of Art, between Third and Ninth streets at Constitution Avenue, N.W., Washington, D.C. On the Mall.


Posted by Patricia Leslie at 11:29 PM No comments: