Last weekend for Michel Sittow at the National Gallery of Art 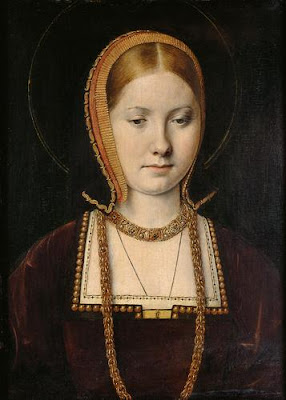 Michel Sittow, 1469-1525, Mary Rose Tudor (1496-1533), Sister of Henry VIII of England, c. 1514,    Kunsthistorisches Museum, Gemaldegalerie, Vienna (Is she not the prettiest thing you ever did see?  She's angelic!  And with a quiet face typical  of many of Sittow's female subjects, the model who may the same model for many women Sittow drew. (You've got to see the show to appreciate this.)  Mr. Sittow's women never look you in the eye, perhaps due to modesty, and seldom do most of his male subjects with the exception here of the man and the cloth hat below.)  Three women are thought to be this subject, although one is likely not the subject, according to the catalog (Isabella, the Catholic).  The traditional subject was Catherine of Aragon, one of Henry VIII's wives but, more recent research shows the lady likely to be Mary Rose Tudor, Henry's youngest sister, who wears a "K" for "Karolus" or Charles, the future Holy Roman Emperor to whom she was betrothed but whose marriage did not take place because Charles got sick, Henry got furious, and Mary Rose Tudor quickly ran off and married Louis XII of France.  Royalty!

An exhibition of art by a court painter for Queen Isabella and King Ferdinand of Spain who sponsored Christopher Columbus' voyage to the New World, will close this weekend at the National Gallery of Art. 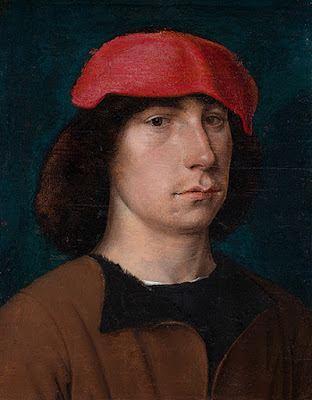 Michel Sittow, 1469-1525, A Young Man in a Red Cap, 1490s  Detroit Institute of Arts. When looking at this, I want to say:  "Dude!  What's with the hat?  You goin' to church or somethin' and have to wear something on your head? (Like former ladies going into services at the Episcopal Church.) Did you have a bad hair day, too?" What does this make you want to say? I'll tell you what the catalog says, and this fellow is on the cover,... That it's similar to other portraits (with head covers) which painters made of themselves or their patron, Saint Luke. And the catalog essay says it may even be Mr. Sittow himself!  However and not withstanding to the contrary, there is still question whether this is a bona fide portrait by Sittow which must mean it's not a self portrait!

Thirteen of the known 25 paintings by Michel Sittow  (c. 1469-1525) which survive are included in the presentation which has a total of 21 works with three by other artists of the period and five attributed to Sittow.  Museums and private collectors from around the world loaned the pieces.

Mr. Sittow of Tallinn, Estonia, is called that nation's "greatest Renaissance artist." He is associated with "Netherlandish" because of his style, training, and influences.
He worked in Spain, the Netherlands, and Denmark, before he returned home where he died of the plague in 1525. 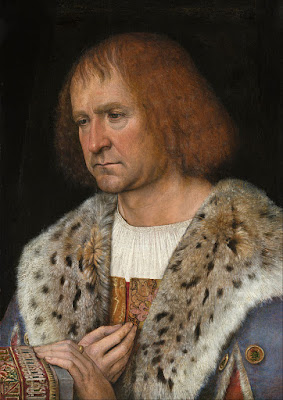 Michel Sittow, 1469-1525, Portrait of Diego de Guevara (?), c. 1515/1518, National Gallery of Art, Washington.  Diego de Guevara served the Burgundian court for more than 40 years and, based on his expression, they were not happy times. (But a study of several seconds of his mouth and eyes hint at a coming smile, so perhaps things were not as bad as supposed on first glance.  The skill of the artist to convey this change!) Mr. de Guevara was a diplomat, a collector and "probable patron of the arts." This painting with Sittow's Madonna and Child, 1515/1518, formed a "devotional diptych" and "rank among Sittow's finest paintings," says the catalog.


Sittow's works were not intended for public showing but for private collections.   Fragments of his past surfaced over the years in Europe but it took almost 400 years for a German curator to hypothesize that Sittow was the artist of the diptych of the Virgin and Child on one side and the Knight of the Order of Calatrava on the other. In 1940 documents in the Tallinn City Archive helped another German narrow Sittow's identity and name him, according to Wikipedia. 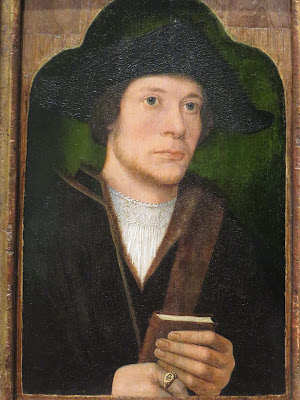 "Almost certainly" Sittow's first teacher was his father, Clawes van der Sittow, a painter and sculptor, according to the National Gallery.

After his father died in 1482, Sittow moved to Bruges, then part of the Netherlands, to study art, and when he was 23,  was appointed court painter to Queen Isabella with whom he traveled across Spain.  He was paid more than twice what any other artist in her retinue earned. 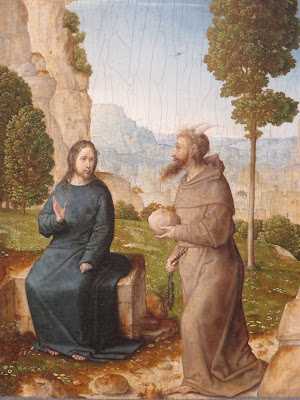 Juan de Flandes, (active 1496-1519), The Temptation of Christ, c. 1500/1504, National Gallery of Art, Washington, one of my favs in the show, although not by Sittow.  Here the devil holds a stone which he demands Christ turn into bread.  (This is all from the catalog.)  The devil attempts to disguise himself as a monk but his horns and frightful webbed feet give him away.  This is the middle of three depictions of the devil and Christ, another on the right side and one on the left, in the backgrounds as the devil tempts Christ again and again, but those images are cut from this photograph of the painting by a bad photographer, me, who did not realize at the time the important portions I was cropping!  (You have to visit the exhibition to take it all in.) With an evil eye, the devil looks askance (at the guilty photographer?).

Sittow's tenure with Isabella's court ended with the queen's death in 1504 and ten years later he was in Copenhagen working on a portrait of the Danish king, Christian II. Later, Isabella's family hired Sittow to paint in Brussels where he lived until returning to his birth place, Tallinn, in 1518.

At the National Gallery, the atmosphere in the Sittow room is one of hushed reverence for the art and the period.

The exhibition was curated by John Oliver Hand, curator of Northern Renaissance paintings at the National Gallery, and Greta Koppel, curator of Dutch and Flemish art, Art Museum of Estonia, Tallinn where the show opens on June 8.

The Art Museum of Estonia organized the exhibition with the National Gallery.

The historic event at the National Gallery celebrates the 100th anniversary of the founding of Estonia and the near quincentenary of the painter's return to Tallinn which has been in the news this week.

Across from Helsinki on the Gulf of Finland and about 400 miles from St. Petersburg, Russia, Tallinn, the capital of Estonia, is the location of NATO's Cyber Defence Center of Excellence which hosted more than 1000 persons from 30 nations in a cybersecurity exercise.

What: Michel Sittow: Estonian Painter at the Courts of Renaissance Europe

Posted by Patricia Leslie at 11:54 PM