Adventure on the 14th Street bus 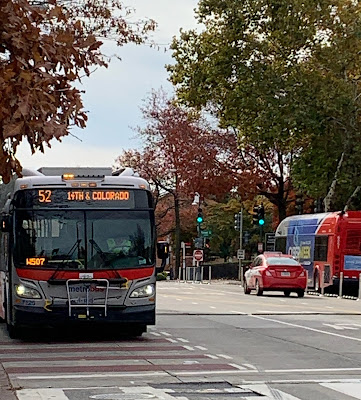 I told myself repeatedly over the few days before I rode public transportation to Gala Theatre that Friday night, I would not be intimidated by fear or a number.

I will ride and I will not drive, I said firmly.

The getting there was the easy part, on Metro from Tysons and then up 14th Street on Bus #52 from the McPherson Square station.

At Gala I saw a wonderful flamenco performance, and wanted to stay for the Spanish Embassy reception afterwards, but the back of my mind rumbled with the gnawing realization that public transportation awaited me at 10:30 at night in the edgy neighborhood.

I skipped the reception at the end of the show and left the theatre and crossed 14th to wait on a bus. Nearby, lights on a police car blinked.

I was happy to see the car and thankful for the upcoming DC mayoral election, for, with the uptick in crime, Mayor Bowser just might have instructed the police to have “all hands on deck.” I hoped so.

At the corner only seconds passed before I was joined by another rider, a woman ranting and raving about Taco Bell: “I didn’t get fired!” she exclaimed. “I quit!” Over and over. She walked back and forth in front of me like a caged beast.

OK, I said to myself silently; I understand. But, where is the bus?

There it was, ambling down the street at last, although only a few moments had passed since I had begun my wait.

We boarded, and I took a seat opposite the rear exit in case a sudden escape became necessary. The woman sat at the front and continued her loud rants.

Another passenger sat across the aisle from her and pulled out a liquor bottle from his jacket and offered her a drink.

“I don’t need that!” she bellowed.

We passed the Taco Bell a few seconds later, and she pointed to it and screeched: “It’s gonna kill someone!”

I tried to look ahead and out the windows, to avoid "engagement" and locking eyes with anyone.

When you ride a bus at night, you expect these outbursts. They are common.

The last three times I went to Mosaic Theater on H Street (pre-covid) the police were always involved in some form or fashion with activities on the free trolley car.

But that was then, and this was now.

14th seemed loaded with police cars every few blocks with red lights blinking on their car tops. I was grateful. Who wants to "defund the police"?

The bus continued its ramble down the street, stopping and starting to let passengers off and on, while the man and the woman continued their exchange which escalated quickly, and he pulled out a cigarette.

Was he going to light up on the bus? What would the driver do? But, behind his hard plastic window and from all I could see, the driver was oblivious to the action behind him, likely used to it all.

When the man called the woman the “n” word (he was black, too), the woman became enraged. Their conversation grew louder, more heated and indignant until she challenged the man to a fight.

They stood in the aisleway, apart, weaving back and forth in time with the bus’s motions and, began to dance the fighter's dance, yelling their words of conflict and hate.

This performance was more than the flamenco, and it was free!

But, at the flamenco, I wasn't afraid, like I was on the bus, sensing danger since I was within arm’s reach of the two fighters who moved in a semi-circle gnarling at each other, like they were in a boxing ring.

Where was McPherson Square?

I decided to get off at the next bus stop wherever it might be, and the woman got off with me, shouting: “This is not my stop!”

In my haste to cross the street and get away, I was too alarmed to look back to see if she re-boarded. Several blocks remained until the Metro station.

I hurried and descended to Metro's catacombs, happy to be safe.

Safe on the Metro?

The train was practically empty when it arrived and Yeeks! I was the only person to board the car.

I will not be afraid or intimidated, I said to myself. I will not; I cannot. But, I was. And still, I cannot stop; I will not.

Posted by Patricia Leslie at 11:43 PM No comments: 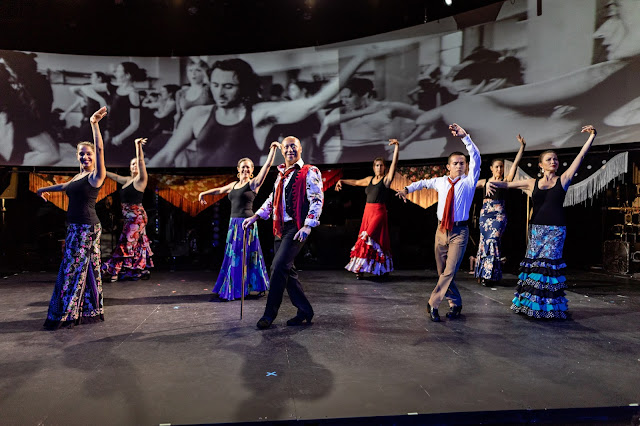 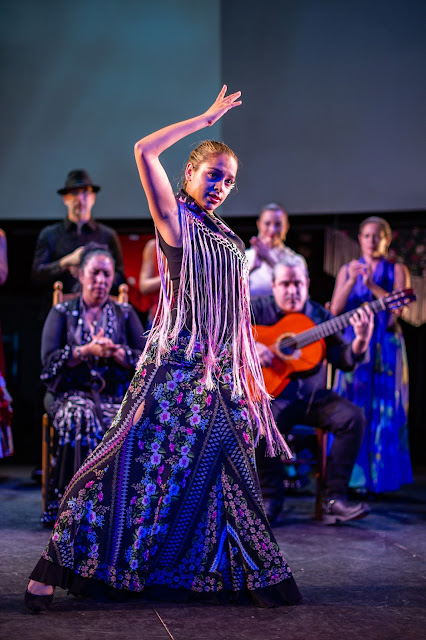 
Its revival this month with Mr. Aparicio, the company's founder, is one of two shows at Gala for the 17th annual Fuego Flamenco Festival, a celebration co-founded by Mr. Aparicio.
Today and tomorrow the flamenco menu includes De paso by the Sara Perez Dance Company with Rubén Puertas, prize winner of Madrid’s prestigious Certamen of Dance competition. 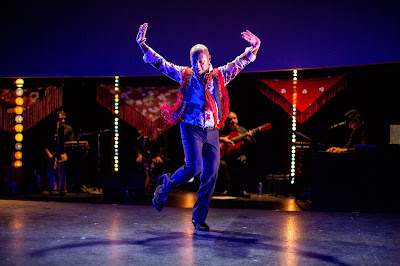 Salvador opens in the 1980s in El Salvador where Mr. Aparicio lived as a child amidst gangs and soldiers who often kidnapped children to mold them into soldiers.
After his parents leave for the U.S., he's left in the care of his grandmother, his only solace to provide him comfort amidst the dangers on the streets and it's to her, his other grandmother, and those of the co-director, Aleksey Kulikov, that Salvador is dedicated.
Act I ends with Mr. Aparicio's gradual exit from the stage while his life resumes as a young Edwin (danced by Ricardo Osorio Ruiz). A distressing separation from his grandmother, reminding the audience of their own painful farewells from loved ones, unfolds as the boy departs to join his parents.
Life in Washington, D.C., their residence, was hardly any better for the youngster. His family's Mt. Pleasant community erupts in a 1981 riot of cultural war and property destruction.
Dance offers young Edwin some respite, but he is told he doesn't look the part of a ballet dancer, but suddenly, the doors to flamenco open.

He heads to Spain which opens the third and final act. There, he trains with renowned teachers before his debut in Madrid in 2001.
Over time Mr. Aparicio dances countless solos on stages throughout the U.S. and performs major roles with the Washington National Opera and the Washington Ballet.  Today, Mr. Aparicio is a faculty member of the Washington School of Ballet. He is the founder of the Flamenco Aparicio Dance Company and received the Cross of the Order of Civil Merit in 2015 from King Felipe VI of Spain.
All through Salvador, large photographs from the era are posted high on the backdrop to help lay the foundations of Aparicio's life.
In colorful attire, six female flamenco dancers with sexy looks matching their motions, embellish Aparicio's life with heels beating on the floor to become another musical instrument in the orchestra of four.
Those four almost steal the show with their strong, unrelenting voices and music of the time.

Amparo Heredia and percussionist and singer, Francisco Orozco cry the anguish of Aparicio throughout the performance while Richard Marlow strums his guitar without pause.

For the finale, Aparicio pairs with his younger self (Ruiz) to dance.

After the ending, when all the performers and orchestra members came to the stage for audience accolades last weekend, co-artistic director Kulikov joined the dance party and showed how he could stomp his heels and shake a tail feather, too, for the delight of all. 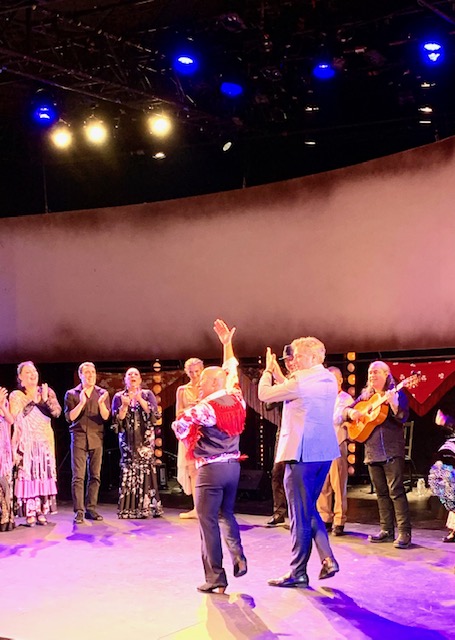 Masks: Masks and proof of vaccination or recent negative COVID test required for all performances.

Duration: About two hours with one intermission

Metro stations: Columbia Heights is one block away or get off at McPherson Square, take bus #52 or #54 up 14th, or, instead of the bus, walk two miles, save money and expend calories! Lots of places to eat along the way.

Parking: With Gala's validation, a flat rate of $4 is available at Giant grocery around the corner or pay $1.50/hour at the Target nearby.

Posted by Patricia Leslie at 11:02 AM No comments: 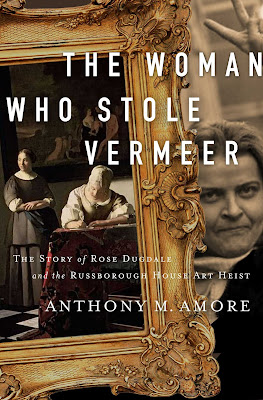 Rose Dugdale is 80 years old this year and practically an icon in Ireland where she romped and fought the British for years.

Always proud of her participation in the Provisional Irish Republican Army (which often denied links to her criminal acts), she sought to aid revolutionaries who worked to transfer IRA prisoners.

Adopting a new identify to contrast with that of her wealthy background, she used her largesse like a modern-day Robin Hood to benefit those in need, including criminals who were not adverse to violence when they deemed it necessary to achieve their goals, and she joined right in. 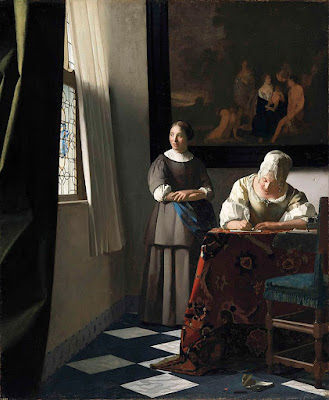 Johannes Vermeer, Lady Writing a Letter with her Maid, 1670-1671, is one of the paintings Rose Dugdale helped steal. It is featured on the cover of The Woman Who Stole Vermeer by Anthony M. Amore/Wikimedia


Her metamorphosis is the thrust of the book, The Woman Who Stole Vermeer: The True* Story of Rose Dugdale and the Russborough House Art Heist by Anthony M. Amore, an interesting biography, especially for art enthusiasts, crime  readers, and scholars of feminist history.

Her attitudes were shaped by the 1960s antiwar movement raging in the U.S., a trip to Cuba, and the growing feminist revolution. She holds a Ph.D. in economics from Oxford University.

Despite her revulsion of and public derision in courtrooms of the wealth and lifestyles of her parents, they never abandoned their daughter, always trying to maintain a relationship, any relationship. Ms. Dugdale took advantage of them, stealing from her own family.

For years she was able to elude police who considered her dangerous and often tried to track her.

She helped drop "bombs" of milk churns on a police station in 1974, the first helicopter bombing attack ever recorded on a police precinct in Ireland. (The bombs failed to detonate.)

In courtrooms, Ms. Dugdale frequently became angry over receiving a lighter sentence than her chums, a reflection, perhaps, of her status.

Her many successful criminal ventures embarrassed the government until she was captured after leaving her driver's license in a stolen getaway car.

She's the only woman to have conducted a major art heist, targeting the Russborough House, reportedly the "longest house" and "one of the finest great houses in Ireland" with one of the finest national private art collections. She knew the place well, better than her comrades who could not identify the priceless works of art, but Ms. Dugdale could.

The robbers gagged and kidnapped one of the owners who thought he was the target of a homicide. (He wasn't).

Confined for nine years, in prison she gave birth to her only child and, later, after the boy's father, Eddie Gallagher was captured (and sentenced to a longer term), they were married inside the walls, the first recorded marriage of convicts while in prison in Ireland.

For those who follow crime and are continually perplexed by the still missing paintings from the Isabella Stewart Gardner Museum (1990), this is a good read. The author, coincidentally, is director of security for the Gardner.

The National Gallery of Art's retired curator Arthur Wheelock, a Vermeer expert, is quoted several times in the book which lacks an index.

* The publisher's web copy of the cover lacks the word "true" while the copy I have includes it.

Posted by Patricia Leslie at 12:57 AM No comments: