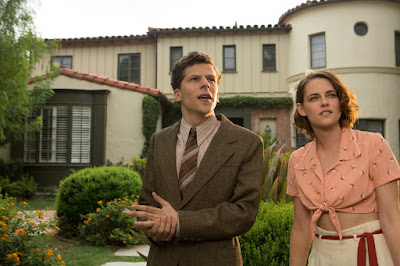 Was this 3-D and I missed the glasses going in?

Where is the action?

Steve Carell is the cheating yawn husband who gives the impression he hasn't been on stage long. Believeable?  Hardly.  (He's straight out of "The Office," and for that I am grateful since I'm still mad over his departure from that show which was ten times funnier than "Cast-Off" or "Cast Out" or "Cash Out Society" or whatever is a better title.  Casting!  Where is casting?)

"Café" is also billed as a comedy, but where is the humor?  This is a comedy like the ones Edgar Allan Poe wrote in his sleep.

It's good fodder for nursing homes where hard-of-hearing residents need not worry since the dialogue is not important.

There's not much else to say except I couldn't help but wonder if this is another autobiographical Allen tale.

Despite harsh criticism from others, I still immensely liked many Allen films: "Matchpoint," "Crimes and Misdemeanors," "Hannah and Her Sisters," "Annie Hall." Since 1965, he's churned out about one film every year which is incredibly productive, except when measured against box office receipts.

Here I see the existence of an inverse ratio with Allen's advancing years (he's 80) and his films, which continue to plummet in style and substance.

Hey, Woody!  We don't give a flip about your flippin' love life!  Get over it! Do you have to put them on the Big Screen?

Posted by Patricia Leslie at 9:10 AM No comments: 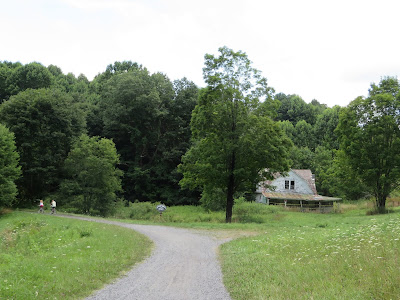 On the Virginia Creeper Trail/photo by Patricia Leslie

It may look like a roadway, but four-wheeled monsters are prohibited on the Virginia Creeper Trail which runs almost 35 miles from Whitetop Mountain   through Damascus to Abingdon in the southwestern part of the state. 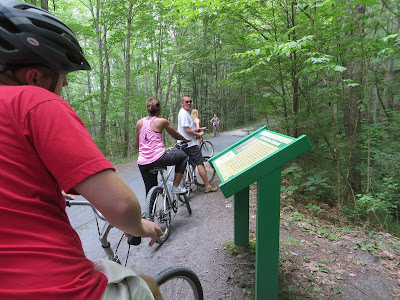 It's open to bikers, hikers, and horseback riders, and just about five hours from D.C. Well worth the trip down Interstate 81 for exercise, beauty, solitude, and just plain fun!

It begins in either Abingdon (2,000 feet ascent) or Damascus where riders may board a shuttle (laden with bicycles) for a 30- to 45-minute trip to the top of Whitetop Mountain, Virginia's second tallest mountain after Mount Rogers.  (Damascus has all the bicycles and fixuns' ready to rent or take your own.)

At Whitetop, riders begin the easy 17-mile ride down and around the mountain to Damascus, or continue to Abingdon for a total of 35 miles. (Simple to Damascus, even for grandmas like me!) 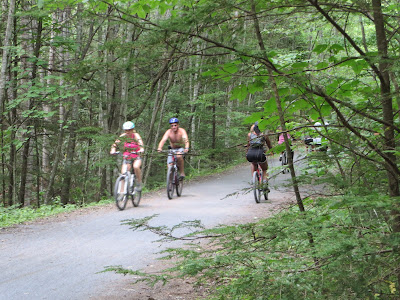 On the Virginia Creeper Trail.  Some people (athletic in nature) ride UP the trail, like dumb fools.  They are all thin, and it is true:  I am jealous/photo by Patricia Leslie

The trail hugs Virginia's southwestern boundary which separates the state from North Carolina and Tennessee. From a certain point, the shuttle driver said, you can see all three states!

It was a hot, muggy day in the lower elevations in the towns, but not for us! We felt only cool breezes emanating from the path strewn with wood chips and some rocks. No sweat!  Of course, you can ride in cooler times, too, but fall months are the most popular ("Lookit those leaves!") and often sell-out, so make reservations now.

Whatever, it's the best! 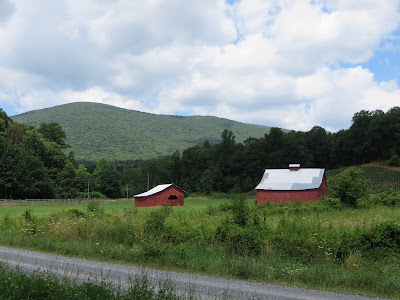 What's this?  Van Gogh on the Creeper Trail?  Nope.  He died in 1890 or he might have been here. It's just, just (!) another typical scene found along the trail filled with all things Mother Nature. What artificial beauty could be lovelier? (The building materials came from Mother Woods.)/photo by Patricia Leslie 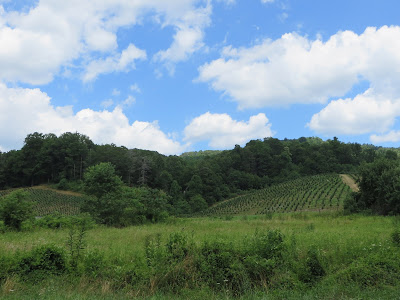 Christmas trees (in the distance, not those weeds) grow along a stretch of the Virginia Creeper Trail.  Buy a Carolina Fraser fir!  No fragrance like it to match the beauty, sounds, and scenery of a North Carolina mountain top.  (Hey, we're in Virginia, not North Carolina!)/photo by Patricia Leslie 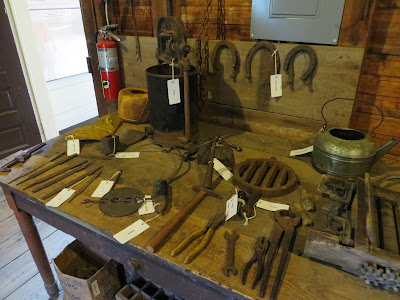 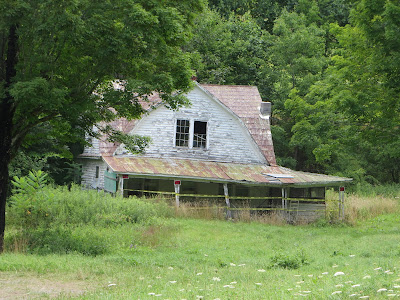 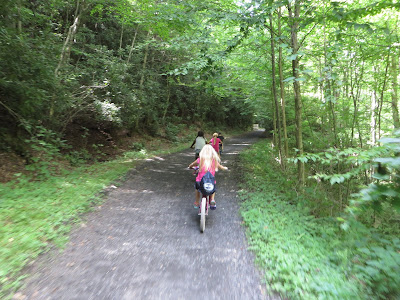 Who needs helmets on the Virginia Creeper Trail?  Not these young'uns/photo by Patricia Leslie 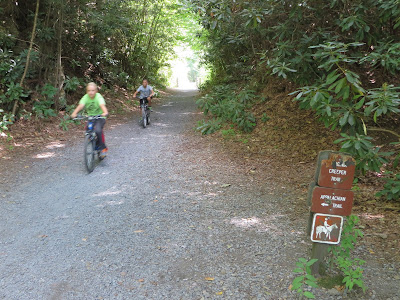 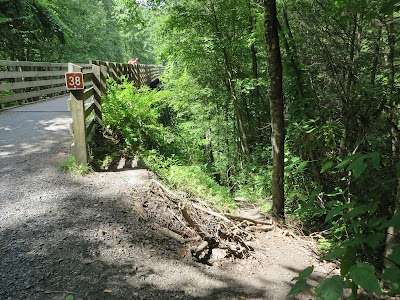 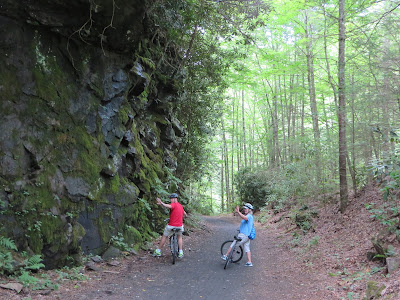 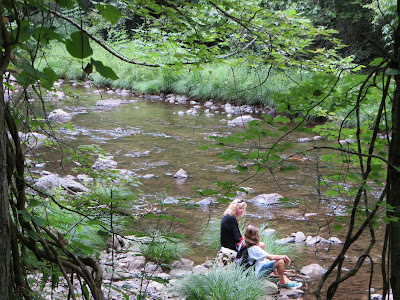 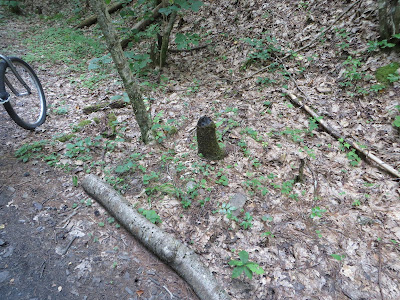 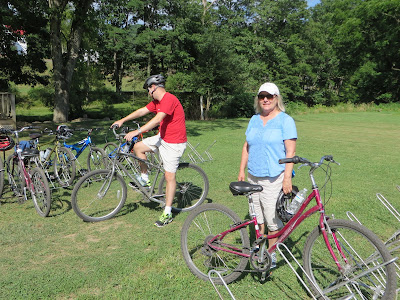 Bike racks aplenty stand ready to house your vehicle while your party stops for a bite to eat on the trail. (Said the guy in red:  "I wish I had that bike.")/photo by Patricia Leslie 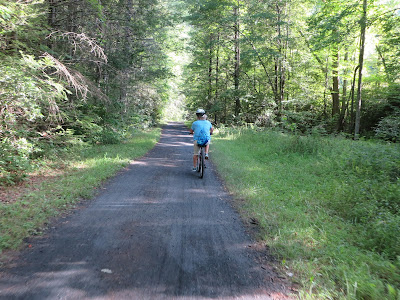 On the Virginia Creeper Trail/photo by Patricia Leslie 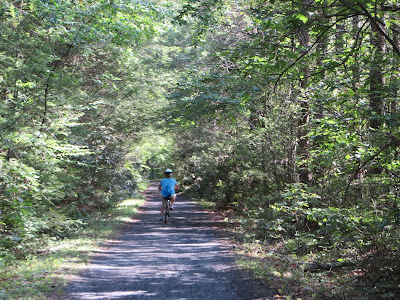 You see what I mean about tree canopies? On the Virginia Creeper Trail/photo by Patricia Leslie 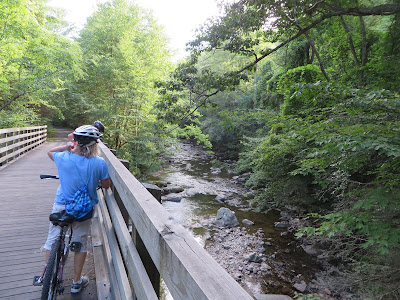 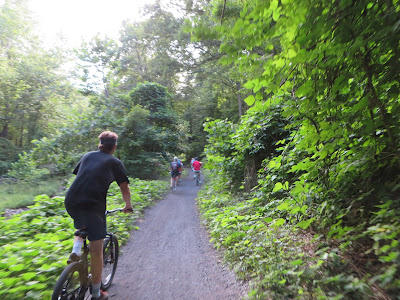 Is that kudzu on the Virginia Creeper Trail?/photo by Patricia Leslie 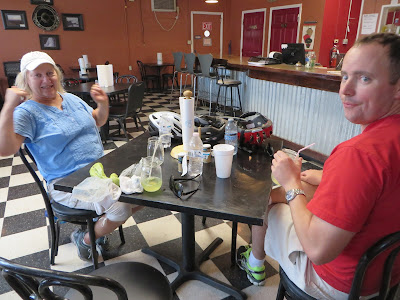 Finish your trip in Damascus with a great big pitcher of margueritas at Hey, Joe's! I'll drink to that!/photo by Patricia Leslie


The people are grateful to the U.S. Forest Service, the cities of Damascus and Abingdon, and property owners who maintain the trail and let us use it. Thanks be to all!

Van Gogh in Damascus?  Novel, anyone?

patricialesli@gmail.com
Posted by Patricia Leslie at 11:53 PM No comments:

At the end theatergoers stood and cheered the performers who came out on stage to receive the accolades, to bob up and down like puppets, holding hands and moving in rows to a replay of "Masquerade" which they had sung moments earlier in Cameron MacIntosh's remake of Andrew Lloyd Webber's "The Phantom of the Opera" now at the Kennedy Center.

A great show, enjoyable in every respect. And I could see it and hear "The Music of the Night" again. Tonight! 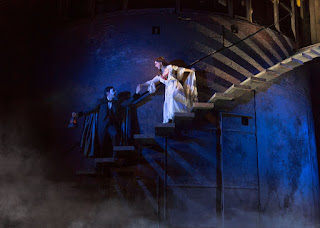 Give the people what they want:  exciting melodrama, unforgettable music (lyrics by Charles Hart and Richard Stilgoe), soaring sets, dazzling costumes, voices you wish would echo at every play you ever attend, and that, my friend, explains the endurance and haunting allure of "Phantom," the longest running show on Broadway where it opened in 1988, and in London where it still plays after 30 years. 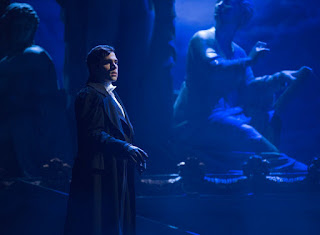 From the get-go, before the announcement to shush your phones, you knew this show was set to be another smashing "Phantom" as you gazed upon the large, opening scene with its high, very high ceiling, shrouding a dark, black and shadowy stage, where single cascading strands of light outlined stark statues and forecast the eerie presentation about to unfold.


I've seen "Phantom" in Nashville, New York, and twice at the Kennedy Center, and it does not become tiresome (like "West Side Story") since it's enlivened by new actors, sets, and magnificent costumes. (Maria Björnson a "designer's designer" says Wikipedia, was the costume designer and Tony winner who died in 2002. Her most famous creation, the show's chandelier, treated a bit differently in this production, is named after her.)


That a strong, melodious voice emanates from the dainty, minute body of Kaitlyn Davis starring as the heroine, Christine Daaé, in "this dream come true" role is unanticipated, Ms. Davis being the understudy for Julia Udine.  (Is it ironic that understudies are part of the script?)

Other notable cast members are Jacquelynne Fontaine as the talented, strong-willed star of the opera house, Carlotta, (and one can easily understand why she was the main attraction until upended by a little upstart), and the opera house's new owners, Monsieur Firmin (David Benoit) and Monsieur André (Price Waldman) who elicit much-needed noteworthy, lighter moments and audience snickers.


Edgar Degas ballerinas danced and frequently fluttered across the stage and relieved serious undertones (choreography by Scott Ambler).
Not to be overlooked are the musicians under the direction of Dale Rieling and members of the Kennedy Center Opera House, directed by Philippe Auguin.


"Phantom" is a heartbreaking triangle romance with a not-so-happy ending. Ahhh, whom to choose? The ugly, the banished, the forlorn and forgotten? Or, the handsome knight come to save the poor lass.  You decide.

All I ask of the Kennedy Center is to think of me and seat latecomers (wishing they were somewhere not here again) only at intermission and prohibit candy sales to inhibit the crinkling of little wrappers.

A phreakish Phantom phan, I am!


What: Carmen MacIntosh's North American tour, "The Phantom of the Opera"

Duration:  About 2.5 hours with one intermission

patricialesli@gmail.com
Posted by Patricia Leslie at 10:46 AM No comments: