A hot night with 'Carmen' at the Olney 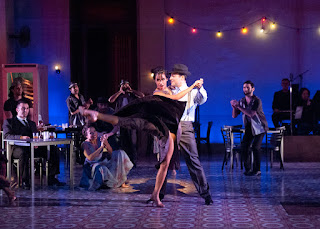 And it's just in time for Black History Month and heating us up on chilly nights (and days). 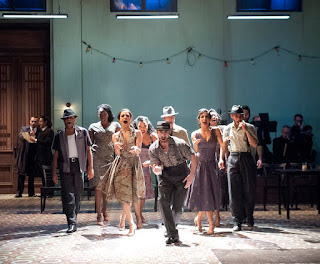 
Triangular love and sex are the nuclei of the story while, on the periphery, actors become 1958 revolutionaries in Cuba's war between the U.S.-backed Batista government and the upstart Fidel Castro. (And the winner was...)

This Carmen production coincides nicely with the opening of U.S. gates to Cuba (thank you, President Obama) and is only one of many place settings around the globe where the play has been performed over the years, in London, Spain, Chicago, to name a few.  ("All the world's a stage...")


At the Olney the plot takes a backseat to fast action and dancing. 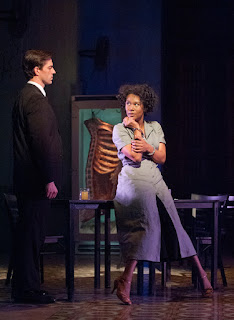 Brandon Andrus is José, an army guy and participant in two simultaneous love affairs, natch, while he works for Batista. His occupation and dueling romances may explain his perfunctory passion after he links up with Carmen. (Houston:  We have a mismatch on the runway.)

At the beginning, José is an urbane, reserved military man who, over the course of the production, shrinks into a blithering mess.  That's what love can do.

Meanwhile, there is Christina Sajous, Carmen, the monopolizing siren who consumes center stage a tad too much. A Whitney Houston look-alike, she dances non-stop while attracting men and more men who are lucky enough to be linked with her in brief romance (under six months) before she moves on to the next big thing.

She is also the nation, "Cuba," testing her freedom,  strength, confidence, and independence.

Caesar Samayoa is Camilo, a champion boxer, who comes along to woo Carmen just when she's ready to ditch José. So long, José, and welcome, Camilo!

Next!  (So many men and so little time.)

The best voice of the night belongs to Briana Carlson-Goodman who, as Micaela, José's girlfriend, is left for dust after he is smitten by Carmen. Ms. Carlson-Goodman's small role leaves us longing for more of her distinctive and melodious sounds.

The fight choreography is some of the best I have seen.  Applause to the choreographer, Ben Cunis, and fight captain, Mr. Samayoa.

One especially memorable scene (it's hard to phrase this adequately but, please bear with me or, better, go and see the show yourself and see what I mean) is reversed when two lovers fight under the spotlight (lighting by David Lander) center stage in front of us but behind the audience on stage which becomes the backdrop.

The stage audience sits stationary in folding chairs and leaning in under dim light with their backs to center stage while they watch a boxing match in shadowy slow motion in front of them. Get it?  (You will when you see the scene. Who could forget the artistry?)

(It reminded me of a scene right out of George Bellows' painting, Club Night (sometimes on the walls at the National Gallery of Art and sometimes not, like now).)

The sets (by Narelle Sissons) are marvelous.  Take one bar with huge columns; make it a hideout, an arena to watch a boxing match, and other places, with clever transitions which occur so naturally they go unnoticed by the audience with its eyes focused on high-powered Olympic dancing.

I would not think this play would be recommended for children, although there's nothing wrong with the language, but the story...hmmmm.

On stage before the show began, Jason Loewith, the Olney artistic director, smiled and said: "It may be cold out there, but it's very hot in here." Amen, bro'!

Directing Carmen is Loewith's buddy, Moisés Kaufman, the founder of the Teutonic Theater Project whose Laramie Project and 33 Variations are two of his best known works. In his Broadway directing debut in 2004, Kaufman received a Tony nomination for I Am My Own Wife.


Kaufman and Eduardo Machado wrote the book for Carmen, and Arturo O’Farrill composed and adapted the music based on the French composer Georges Bizet's 1875 opera, Carmen. Kaufman, Loewith and  Christopher Youstra (who leads the 11-piece brassy orchestra on stage) wrote the lyrics.

Carmen in one form or another may be almost 200 years old. The original may stem from an 1824 poem, The Gypsies, by Alexander Pushkin, followed by a novella of 1846 which was used by Bizet to create his opera. (The Olney got a eight-year jump on Carmen's bicentennial celebration.)

Contrary to impressions, it's not a trip to reach the Olney from Northern Virginia. From the Beltway, take 270, exit at Wootton Parkway, drive Norbeck, left on Georgia Avenue, right on Old Baltimore and right on Olney Sandy Spring Road which puts you two lights and about a quarter mile from the Olney, and you've bypassed Maryland's toll fees.  Under 45 minutes.  Take your GPS.

What: Carmen: An Afro-Cuban Jazz Musical

When: Now through March 6, Wednesdays through Saturdays at 8 p.m. with Saturday and Sunday matinees at 2 p.m., and a Wednesday matinee at 2 p.m. on March 2.

Audio described performance for the blind and vision impaired:  Tonight at 8 p.m., provided by the Metropolitan Washington Ear.  Sign interpretation is available upon request.

How much: Tickets start at $38, with discounts for military, groups, seniors, and students.

Duration: About 100 minutes without intermission.

Refreshments: Available for purchase and may be taken to seats.

Posted by Patricia Leslie at 5:46 PM No comments:

National Symphony tickets on sale for $13 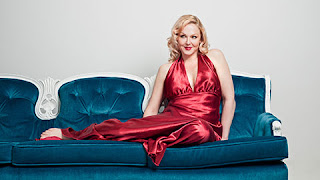 You must buy a minimum of three tickets (total = $39 @ $13 each) to get the National Symphony seats at this whoppingly discounted price.  Although the sales price has gone up a little ($2 each) over recent years, it's still a grand deal!

And there are no handling charges. 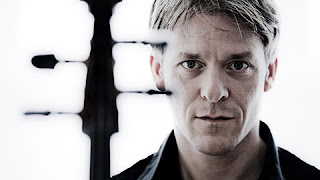 No Saturday night seats are available for $13, but there are Thursday nights, some Fridays, and two Friday "coffee concerts" at 11:30 a.m.

The offer ends Feb. 26 and may be withdrawn at any time. 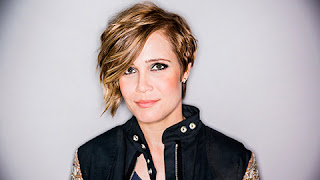 For more dollars ($23 or $33 per ticket) you may purchase "prime orchestra" and "premium orchestra" seats.

All seats are on the orchestra level, and here's the skinny:

The sales dates and guest artists are:

April 14 and 15 (Thursday and Friday eves): Hugh Wolff, conducting works by Barber and Ives with violinist Anne Akiko Meyers who will play Bates. The Friday night performance will start at 9 p.m. and feature an abbreviated show and "party" of sorts called DECLASSIFIED: The B-Sides with Mason Bates and "a sampling of his most innovative hits."

June 2 and 3 (Thursday and Friday eves): Eschenbach conducting works by Haydn and Schumann, and violinist Leila Josefowicz who will play Salonen.

What: The National Symphony Orchestra in concert

How much: Minimum $39 for three tickets (or $66 or $99). No handling charge.
Metro station: Foggy Bottom. You may ride one of the free burgundy shuttles from Foggy Bottom to KenCen or walk it (10 minutes). The shuttles are at the top of the escalators.

Posted by Patricia Leslie at 10:30 PM No comments: