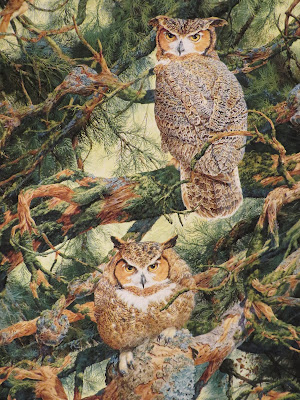 With a name like Robin Hill, you were expecting someone other than a natural history writer and artist? Perhaps, a composer? An illustrator? An outdoorsman? A conservationist?

Check all of the above. 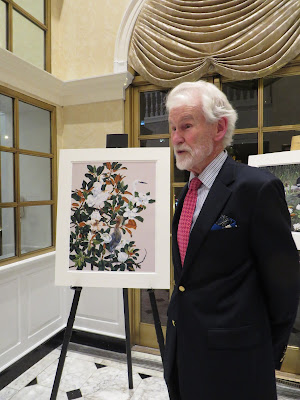 Robin Hill at the Fairfax at Embassy Row, Washington, D.C.

The Robin Hill who was in town recently at the Fairfax at Embassy Row is about as colorful a personality as the birds he draws: lively, quick, intricate, and down to earth.

His name and birth place were an early prescription for his life, steering him to wildlife and natural history paintings, chiefly birds which the Morris Museum of Art in Augusta, Georgia claims ownership of 200 (and has devoted four exhibitions to them over a period of seven years). 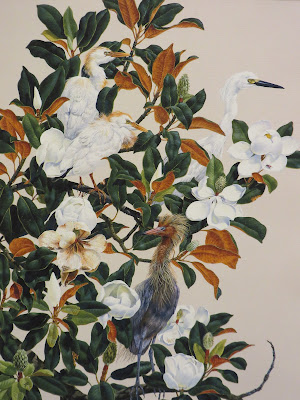 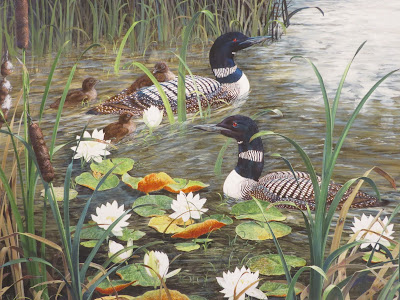 At the "artful evening" hosted by Studio E Partners of Bethesda which represents Mr. Hill, he talked about his life's work, standing alongside a few of his canvases.

An artist in the style of John James Audubon, Mr. Hill said he never sits outdoors to draw animals and plants, nor does he take photographs, but he relies upon years of experience knowing where to find the best pictures to use for modeling, including Ranger Rick magazine for children.

He amplifies scenery and branches, often including a beetle or two, and when they are omitted from a work, purchasers frequently ask that he add them.

He likes to draw birds of prey.

Born in Brisbane, Australia in 1932, Mr. Hill's family moved to England when he was a year old, and there at age 11, he enrolled at the Wimbledon School of Art. When he was 16, he returned to Australia and studied at the National Gallery of Victoria Art School and the Royal Melbourne Institute of Technology.

“I got tired of school partway through, and I ‘went bush,’" Mr. Hill writes on Studio E's website:  "I worked as a cowboy on a sheep and cattle station, and then I travelled the country working in shearing sheds. During this time, I was drawing, painting and closely observing nature, which laid a foundation for what was to become my career."

He eventually returned to school and finished his studies, continuing on his natural history path, drawing and illustrating books on wildlife, crafting magazine illustrations.

Like his subjects, he thrives on the natural world. Pox on tech stuff and gadgetry: “Electronic communication is not my world; I’m not technically inclined. I know Studio E can facilitate this for me, and I can get on with my painting.”

And so he does.

patricialesli@gmail.com
Posted by Patricia Leslie at 11:44 PM No comments: 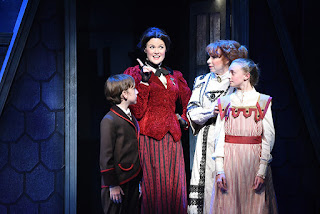 The Olney does it again:  Brings to the stage the audience so much fun and glee, you'll want to fly away with the star on a lighted kite, too.

Right here at the holidays, and if it were my family nearby, I know what I would say about making this a Christmas tradition: "Let's go to the Olney!"

Forget that Christmas shopping and wrapping, the paper, the labeling, the mailing:  "Where's the Scotch tape?"  "I can't find the scissors!" Do it all right here: Give theatre tickets. Help save the Earth. After all, experiences and memories are what counts. Not things, or as my aunt used to say "that collect dust." 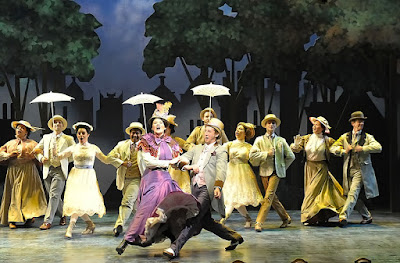 Patricia Hurley in lavender on the front is Mary Poppins, and Rhett Guter is Bert and her dancing mate, whirling away in Mary Poppins with the cast at Olney Theatre Center/Photo by Stan Barouh

Dancers par extraordinaire (under the direction of Tara Jeanne Vallee), fabulous costumes which draw "oohs and ahhs," a production unto themselves (by Erik Teague), mostly non-stop action, and things that fly around all over the place, amidst a lot of cheer and color and song,  Mary Poppins is great entertainment for all ages.

Like Santa, Mary (Patricia Hurley) swoops in from the sky, dressed in her head-to-toe finery that you can visualize right here, wearing a radiant smile, and brimming with joy which she sprinkles on those around her, and to you, too!

Children always like to see children in a show, and Olney's Mary has two adorable ones, Jane (either Katharine Ford or Audrey Kilgore) and Michael (Henry Mason or Tyler Quentin Smallwood) confident, experienced, and able to make the audience laugh, despite it being hard to hear their lines up on the mezzanine level.  (We knew they were funny because we could hear those on the orchestra level hee-hawing a lot, but not to fear, mezzanine-level patrons, you've got a special treat coming when I held my breath and up, up, and away (?).)

Mary Poppins, straight from a fairy tale, drops in the Banks' household (what an appropriate surname!) to become the children's nanny whom Michael and Jane soon grow to adore (especially with her bag of tricks--how do they do that?) but circumstances cause her to leave, and (shudder) here comes the Wicked Witch of the West (Ms. Andrew, magnificently played by Valerie Leonard AKA Ms. Terrible ) to the Banks to perch as the next nanny, and perch she does, right down to her dark, drab  apparel, shrill, and magical disappearance.  (Ms. Hurley is practically perfect in her role, almost undone by the few moments onstage of Ms. Terrible, cast as the evil persona who must inhabit every show.  Or, what's a show without an antagonist or two?  We have to have somebody to detest.)

Karl Kippola is Mr. Banks, handsomely and realistically portrayed as the gruff but soft dad, quite concerned about his livelihood (the banking business, of course; you think with a name like Banks, he wouldn't be in the banking business?) his anticipated job loss, and how will he ever provide for his children's schooling, his family's household staff and expenses?  (An eternal dilemma faced by many heads of households.)


He is very busy with his business, thank you very much, to the neglect of his children who shall soon grow up and disappear, like Mary!  His wife (Eileen Ward) has a purposefully weak and submissive role (to omit her solo tune would strengthen the play), coddling her husband so unbelievably, I knew either she or I would soon become outraged and dash him in the head.  To be or not to be.

Mary is accompanied by her good friend, Bert (Rhett Guter) who dances and chimney-sweeps his way through the show, from spot-on scenes (by Daniel Ettinger) which evolve from park to roof top to parlor, bedroom, bank, and more.

The songs will make you happy:  A Spoonful of Sugar and Supercalifragilisticexpialidocious are two of the most familiar.  So much for baa-humbug.

The hidden nine-piece orchestra, under the direction of Timothy Splain, brings alive all the sights, sounds, and mischief of eternally smiling Mary and her troupe.

What's not to like about Mary? Every home needs one.

What:  Mary Poppins by Richard M. Sherman and Robert B. Sherman

How much: Tickets begin at $43 with discounts for seniors, groups, military, and students


Duration:  2.5 hours (it will fly by) with one intermission

Refreshments:  Available and may be taken to seats

Posted by Patricia Leslie at 11:57 PM No comments:

Ezilon.com
I wish I knew how to draw.

Picture a map of Florida with (if room) the major cities  (Miami, Orlando, Jax); seas gnashing on both sides.

Off the southeastern coast comes Hurricane Trump, blowing and going, his silhouetted huge bust loaded with strong winds aimed at Florida.  And/or looking like a shark.  Maybe his hair becomes a shark's fin.

Hanging on to a palm tree with both hands, mid-state and flying parallel to the ground is a smaller Hillary in pants suit (natch), necklace (natch), hair blowing backward.

patricialesli@gmail.com
Posted by Patricia Leslie at 11:03 AM No comments: 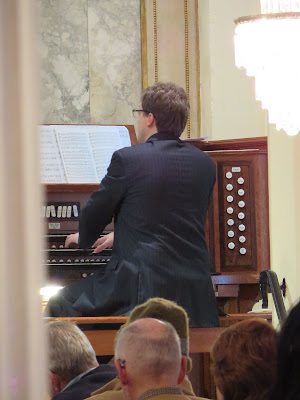 Mr. Lodico who began his musical career at age six with piano lessons, is a North Carolina native who graduated from the Curtis Institute of Music in Philadelphia where he studied organ, harpsichord, improvisation, and piano.

A Fulbright Scholar to the Netherlands who completed a master's degree in music at the Amsterdam Conservatory, Mr. Lodico has presented concerts throughout the world, including a cathedrals tour in Scotland and England where he played the organ in holy places.

Mr. Lodico is also a critic who writes about musical festivals and performances he attends around the globe.

His concert today is part of St. John's First Wednesday Concert Series, presented from October through June at no cost to the public. 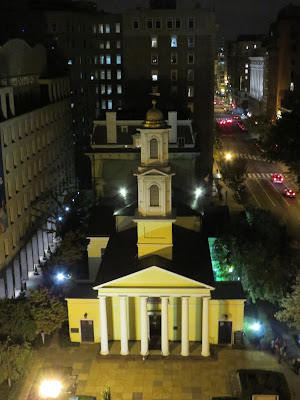 St. John's Episcopal Church, Lafayette Square, Washington, D.C./Photo by Patricia Leslie
St. John's was founded in 1815 and is known to Washington residents as the yellow church at Lafayette Square.  It's often called the “Church of the Presidents” since beginning with James Madison who was president from 1809 to 1817, every president has been a member of St. John's or has attended services there. A plaque at the rear of St. John's designates the pew where President Abraham Lincoln often sat when he stopped by the church during the Civil War.

First Wednesday concerts begin at 12:10 p.m. and last about 35 minutes. Food trucks are located at Farragut Square, two blocks away.

Upcoming dates and artists of the First Wednesday Concerts are:

May 3: Thomas Smith, the director of music at Christ Church, Georgetown, will play A Journey to Merrie Olde England - A Recital of English Organ Music

June 7: Bach's Brandenburg Concerto No. 2 will be played by the U.S. Air Force Strings with trumpeter Mary Bowden

patricialesli@gmail.com
Posted by Patricia Leslie at 1:29 AM No comments: