The Wall Street Journal and "anthropomorphism" 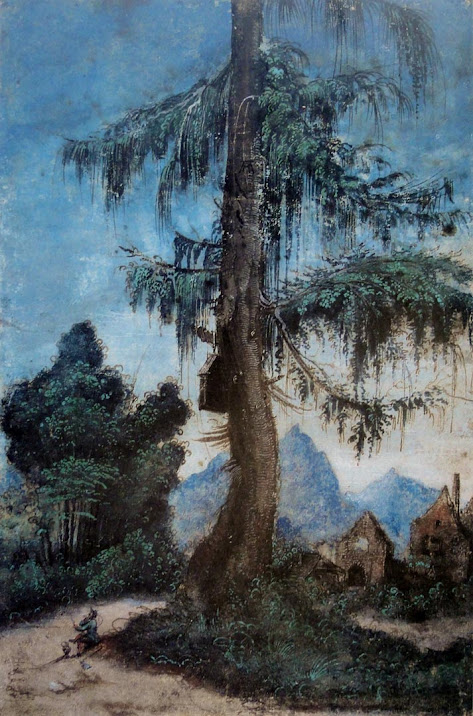 Albrecht Altdorfer, Landscape with a Spruce  which may be confused with Landscape with Woodcutter, c. 1522/Kupferstichkabinett Berlin/Wikipedia Commons

Anthropomorphism is unusual enough to find the word in a newspaper, let alone two different articles covering the entirety of a single page. Both articles in the Journal's weekend edition, Sept. 19-20, 2020, about works by German artists, their lives separated by centuries.

The word leaped from the Journal's page to me who did not know the meaning, but, ask me now!

To those unlearneds, "anthropomorphism" is "having human characteristics" (like Trump).

One article, "Rediscovering a Renaissance Man" by J.S. Marcus, is about the Louvre's new exhibition on works by Albrecht Altdorfer (c.1480-1538), who was forgotten for several hundred years until "rediscovered by 19th-century German art historians," and used in the next century by a different group of finders, the Nazis. They thought Mr. Altdorfer was a "folk artist" and used his art to convey their message. Current experts say they got it all wrong.

Mr. Altdorfer is generally considered one of the founders of the movement which came to be known as the Danube School.

The Louvre's Altdorfer exhibition was delayed from April and set to begin October 1, according to WSJ (whoops!  This just in:  Delayed until Jan. 4 , 2021 !), with  191 works or "more than a third of his surviving oeuvre."

(If only the French would let us back in! With the show's delay, maybe you can gain entry before it closes whenever that might be.. The National Gallery of Art in Washington has 167 Altdorfers in its collection,

Who is WSJ writing for, anyway? Is Trump going to arm wrestle his good friends, President Macron and his wife, into opening the gates to France so Trump can toot the French horn? I imagine that in the time it's taken me to learn how to spell "anthropomorphism." Trump has probably written a symphony which will likely not impress his pals, the Proud Boys. What are they proud of anyway? Tatoos? Motorcycles? Looking like every other Harley-Davidson rider? You see what art can do!)

It's easy to see anthropomorphism in Mr. Altdorfer's Landscape With Spruce Tree, pictured in the Journal. The long, tall tree becomes long, tall Sally with stringy hair, sinewy arms, maybe wearing an apron and carrying a birdhouse purse. (The next time you're at the National Gallery of Art's Sculpture Garden, check out Roxy Paine's Graft for anthropomorphic examples.) 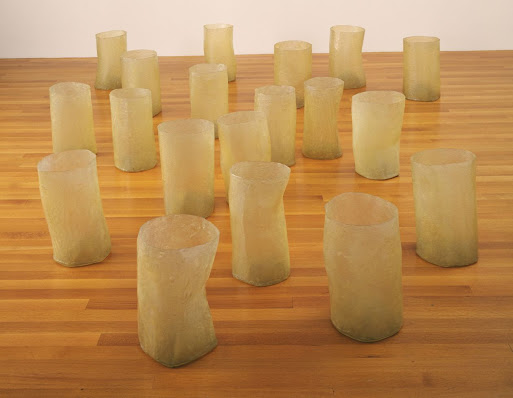 If you are still reading, I hope you have added a new word to your vocabulary, or maybe you knew it already. Can you spell it?  No peeking!

Posted by Patricia Leslie at 11:40 PM No comments: 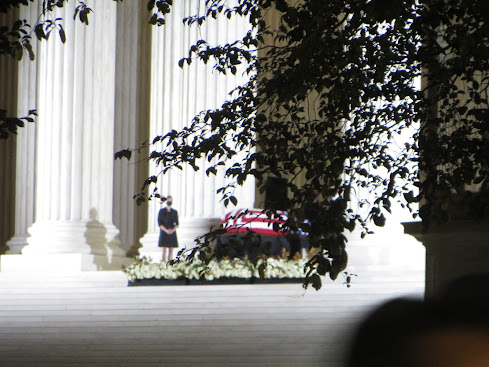 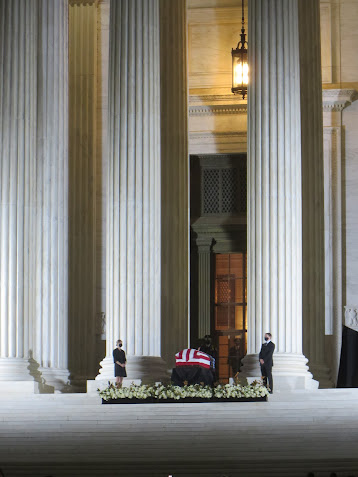 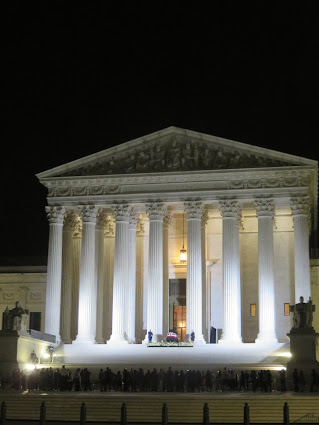 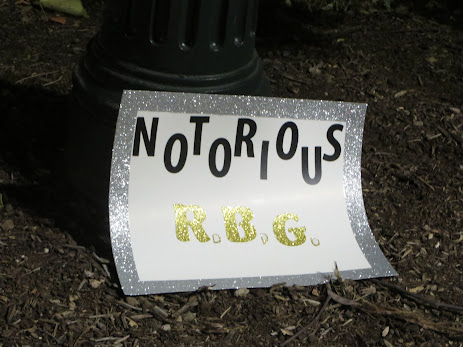 Across the street from the U.S. Supreme Court, Sept. 24, 2020. It was always the same at the opera, whether it was the Kennedy Center or Lisner Auditorium at George Washington University: Just before show time, Justice Ginsburg would enter the hall through a side entrance (at the Kennedy Center) surrounded by three bodyguards, one, always a woman, dressed in characteristic suits of dull monotones. They did not sit with her. I believe she sat alone.

Her silhouette was unmistakable and audience members stood, cheered, and applauded her presence every time. At both places she always had the same seat:  orchestra level, on the left in the first section towards the rear, one row from the aisleway at the Kennedy Center, and at Lisner, a few rows from the stage, center left. Her presence lent a happy tone to the production, whether it was a sad show or not.  Now, it's a sad show./Patricia Leslie 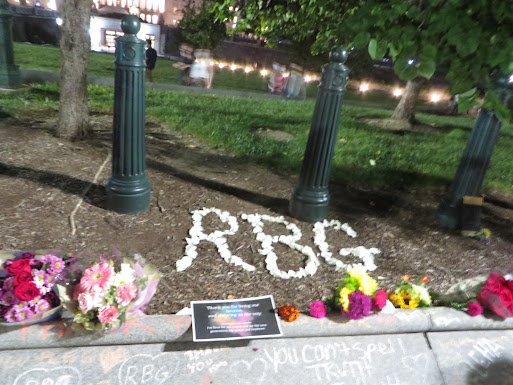 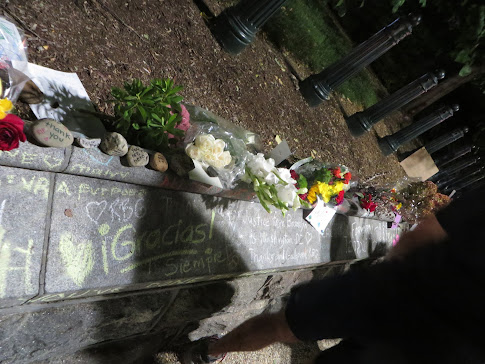 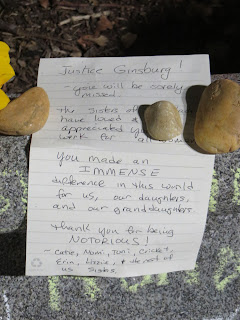 Across the street from the U.S. Supreme Court Sept. 24, 2020 was this letter which reads (the portion not covered by rocks): "Justice Ginsberg! - You will be sorely missed... The sisters ... (rocks) have loved your work for all ...You made an IMMENSE difference in this world for us, our daughters, and our granddaughters. Thank you for being NOTORIOUS! Catie(?), Nomi, Toni, Cricket, Erin, Lizzie & the rest of us sisters"/Patricia Leslie 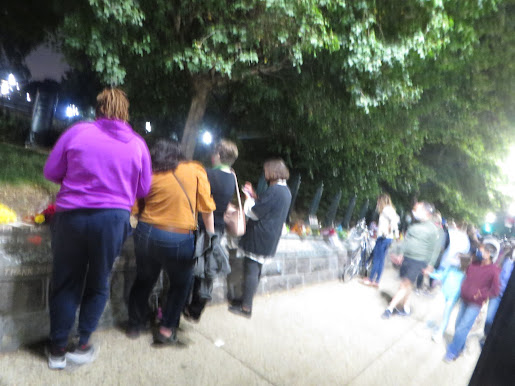 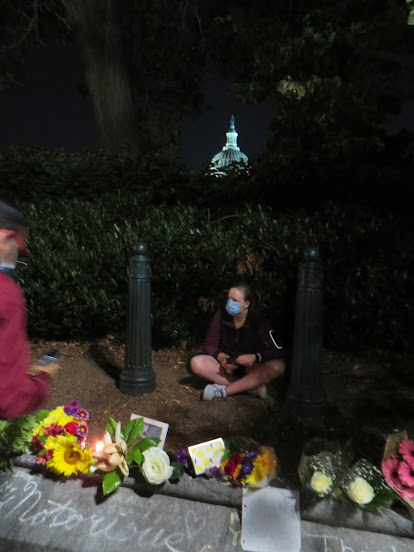 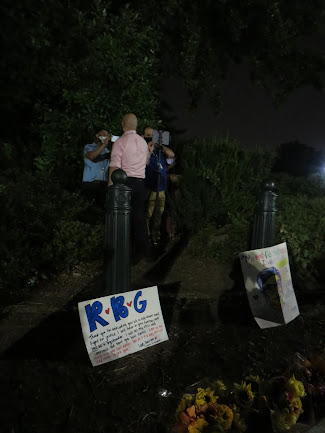 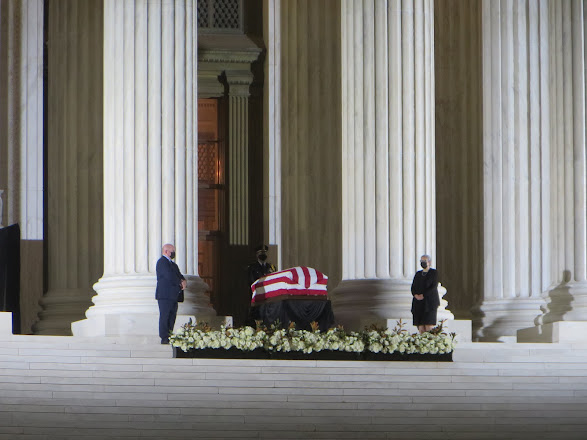 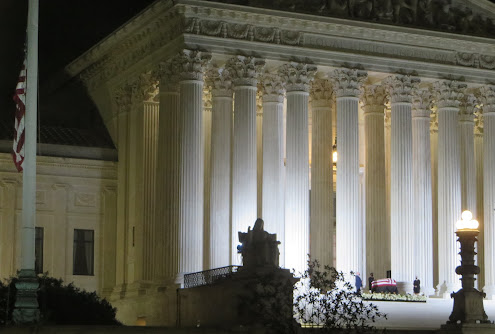 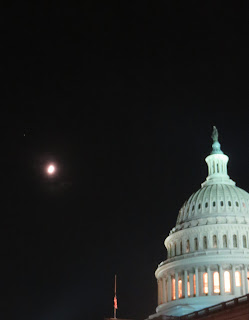 Posted by Patricia Leslie at 11:22 PM No comments:

Alexandria's 'Love Letters' are a match 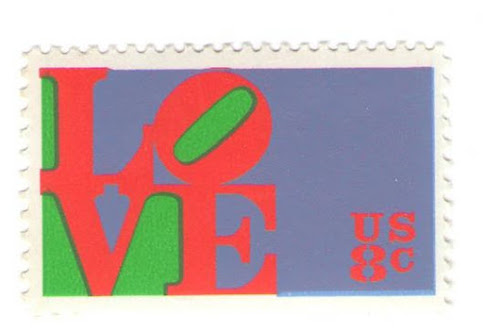 The U.S. Post Office "Love" stamp, 1973
Letters?  Who writes letters?  Millennials don't even know how to address envelopes, let alone write letters.
But, watching and listening to Love Letters now on stage at Little Theatre of Alexandria makes you long for and appreciate the letters which used to come in the mail, the letters friends and relatives used to write, that now, re-reading them years later revives voices and experiences which take us back to other .......(fill in the blank) times.
These Letters are a wonderful short escape from our anxiety-ridden world, a delightful detour along a different path from what a playgoer expects.
For "Small Theatre for Troubled Times" as LTA bills this first show in a series (with a PWYC admission price), Nicky and Steve McDonnell (who are married in real life) are longtime "friends," Melissa and Andy, who grow up together, beginning with pre-school and lasting 'til death did them part.
At separate tables the couple sit at simple wooden desks on opposite sides of the stage against a dark backdrop with two highly placed, large silhouetted windows. They face the audience and read their letters to each other.
Back and forth, like tennis balls on a court, they go, but their dialogue is much more interesting than a tennis match and sometimes letters fly faster than Serena's serve (sorry, could not resist).
I can't recall another stage performance where a playwright (A.R. Gurney) so effectively used silence.
When a letter generates no reply, the sender waits a moment in silence before writing again and sometimes, a third time.
Over the years, their love (or is it?) deepens.
The letters follow their lives from primary and secondary school  through college, adulthood, marriages, jobs, children, dreams, disappointments, regrets. The "friends" relate their different journeys, him to law school, Japan, relationships, and her to parents, art, relationships until THE END.
Initially, Ms. McDonnell was a little too loud, too rambunctious but perhaps she was setting the tone for Melissa's personality, because she calmed down soon enough, or maybe it was I who got used to her antics which did not dominate the show after the first few moments. Director Joanna Henry coaxes expressive hand and body movements from Ms. McDonnell who gets up from her desk occasionally, much like a political candidate to stake her ground.
Except when reading or looking over his shoulder for his "wife," Mr. McDonnell, a star from Saturday Night Live and more, looks straight at the audience.  His  dark conservative suit with tie and glasses befits a Yalie who thrives as a New York lawyer who decides to run for a seat in the U.S. Senate and wins!
These Love Letters are a certain hit,  easy to understand the 1990 nomination for the Pulitzer Prize for Drama.  I expected to see a dull, wittyless platform but this convincing duo engaged me from the get-go.
Certainly, another covid-19 victim is the theatre and LTA which has reduced seating to approximately 25 percent to ensure safety practices which it takes special care to follow.
Nick Friedlander, producer; Brittany Huffman, stage manager; Jeffrey Auerbach and Kimberly Crago, lighting; Alan Wray, sound; Bobbie Herbst, properties; Russell Wyland, set.

Parking: On the streets and in many garages nearby with free theatre parking at the Capital One Bank at Wilkes and Washington streets (when the bank is closed).

Posted by Patricia Leslie at 11:59 PM No comments: