A Blossom on the Millennium Stage 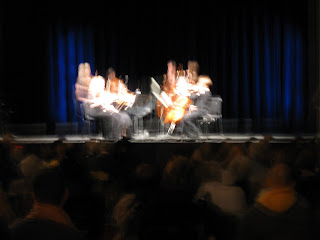 Have you ever attended one of the free performances at the Kennedy Center’s Millennium Stage at 6 p.m. and been disappointed? Nor have I.

The music, the dancing, the sounds are always incredibly outstanding and entertaining. It's easy to drift into "la la" land.

Last Friday night was no different when members of the National Symphony Orchestra played Cesar Franck’s Sonata in A Major for violin and piano and Maurice Ravel’s Quartet in F Major. All the step seats were taken, and it was another SRO crowd.

The only trouble spot were the sounds made by the technician talking into his headset almost nonstop, audible to those of us seated in the back rows.

And I wish the program had included a brief biographical sketch on the performers who were Carole Tafoya Evans, violin; Susan Midkiff, violin; Nancy Thomas, viola; Mark Evans, cello; and Cecilia Cho, piano.

Did I mention the Kennedy Center’s happy hour? Imported beer and pretzels: $4 (before 6 p.m.)
Posted by Patricia Leslie at 10:18 PM No comments:

Orange You Glad You Rode Metro on Inauguration Day? 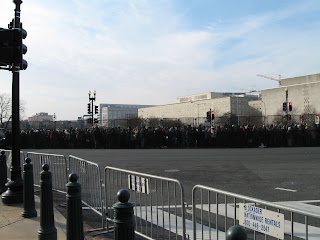 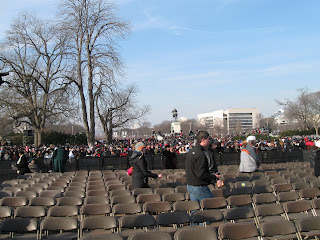 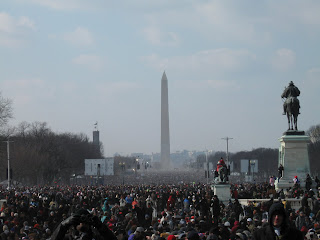 A 50-something woman with short brown hair stood atop her Metro seat and screamed: “Is anyone here from D.C.?”

The train operator frequently announced: “The central office has told me to wait here. There are six (six!) trains ahead of us” and then came the news that we would skip stops at the Smithsonian, L’Enfant Plaza and Federal Center South. "It's like this all the way to Capitol South," the operator said. Oh boy. I had earlier heard on the radio that the crowds engulfed L'Enfant Plaza, causing station operators to throw open the exit gates.

Like orange seeds inside an orange pulverized into juice, we were a bit more packed than the normal orange crush experience (the orange line, you know) on a weekday. The visitors kept snapping pictures on the Metro. The Metro! Did they not know it was like this every day? I wondered.

The woman and her husband had blue (God forbid, blue!) tickets and were getting antsy about getting to the ceremony on time.
(Good luck, visitors! Are you still waiting in line? Or have you frozen up in the tunnel and been tossed out in the garbage?)

Being the only D.C. resident within earshot I calmed them down with soothing words about Metro’s efficiency. To the New Yorkers smashed up against me I suggested that they get off at Foggy Bottom and walk to the Mall which would be faster and better than standing like flaming flamingos for another hour. Besides, I would have more space for air intake and would be freed of the mother's hair in my face. They took my advice.

As they got off the train they told me: “New York is better prepared for crowds like this than Washington is." As one who protects a loved family member under attack by an outsider (what?) I defended Metro the best I could.

To the right of me stood Mississippians; to the left of me, Vermontians and on top of me, Floridians.

A sitting (sitting!) man, about 40, announced to the crowd as he read from his Blackberry: "The police may shut down the gates at the Capitol because of the crowd crush." Thank you very much! That's just where I was headed.

Soon (payback time), one of his little girls, about 9 years old, showed signs of nausea, and he frantically dived into their family bag of essentials and pulled out a plastic bag to catch her emission in the nick of time. Hoping the involuntary act was not contagious I looked away.

What a difference a stop makes!

The train picked up speed, and after 16 hours we arrived at Capitol South and what to my wondering eyes should appear but my, oh my, fur coats! Fur coats to the left of me, fur coats to the right of me, fur coats up, and fur coats down. They adorned every other woman, quite a different crowd from my group coming in from Virginia. The people roared approval when the station master announced over a loudspeaker that the gates were going up, like the parting of the Red Sea when Moses waved his magic wand.

It was not necessary to walk or even touch the ground for the crammed crowd carried you along. Upon reaching sunlight I discovered how lucky I was that security for the orange sections was fully staffed. At long fences thousands of poor folk with blue and silver tickets stood motionless like cattle waiting for entrances which never opened.

Must have been my color: Go, Volunteers!
Posted by Patricia Leslie at 10:40 PM 2 comments:

A Dark Parade On Pennsylvania Avenue 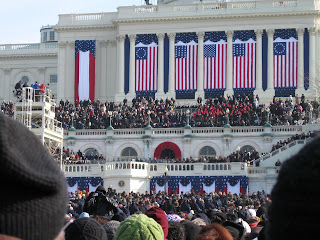 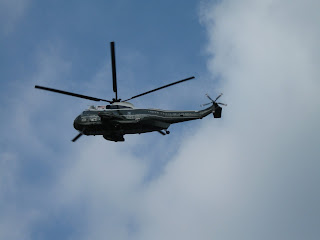 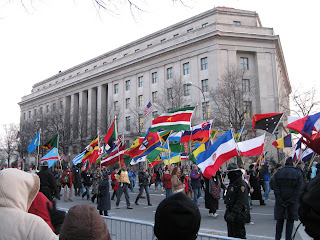 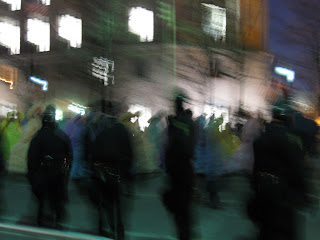 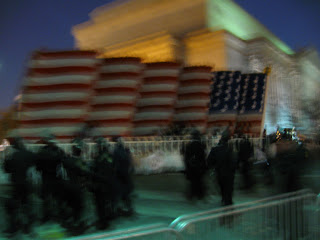 Mayor Fenty said you could either do the swearing-in or the parade, but logistically, not both. Fiddle, dee, dee: He doesn’t know determinators very well.

Maybe it was my Inaugural seat, rows from the podium which gave me extra energy, or maybe it was the energy transfused from the Big Event itself!

Whatever it was, after the ceremony I joined throngs at the Capitol shouting as loudly as we could “good riddance” to Bush’s departing helicopter, and then I took off for Union Station to warm my toesties.

It took two trips around the station before I found a seat on a table upon which to perch with others and eat my smushed peanut butter sandwich, the likes of which have never been so welcomed.

We were thrown off and out for Inaugural ball preparations, and I made my way to the parade route where a security guy at the gates, muscular, about 30 and 5'10" or so told me to unzip my jacket.

I unzipped the remainder of my jacket.

Immediately he put his hands inside it and moved his hands over my stomach, my sides, my back. I guess being a single woman and a senior citizen (!) made me look suspiciously like one of the female suicide bombers in Baghdad.

Stunned momentarily with my arms still held aloft I whispered: "Whoo, baby, will you do that again?"

Gathering what was left of my wits I headed for the street and found a friendly place atop a short wall at the Frances Perkins Labor Building where I joined four Chicagoans who had their own stories of the day to relate.

They had watched the swearing-in at a bar where they rushed at 11:30 a.m. with their purple tickets when they were unable to gain admittance at the security gates where they had waited three hours. Two men with purple tickets had walked to the Capitol from the Mayflower at 5:45 a.m. and never got in.

"Why didn't you take the Metro?" I asked one.

He smiled: "You know the walk was longer than we thought it would be."

Still, everyone was in a good mood, happy, jovial, and celebratory.

We waited and waited for the new (!) President Obama’s “parade” which a friend relayed by phone was delayed by Ted Kennedy’s sudden illness.

But why did the parade parade have to begin 45 minutes or so after the President’s 500 (conservative estimate) motorcade/vehicle entourage went by?

Meanwhile, a friend visiting from Tennessee was crying when she called me stranded on the other side of Pennsylvania Avenue and prevented by security from crossing the parade route. Medical had thrown her out of a trailer threatening her with arrest if she didn't leave.

"My back pain medicine hadn't even kicked in," she wailed. She called from the Indian Museum where she had found respite, hoping to join the multitudes spread out in the floor there sleeping. "You ought to see them!" she sobbed.

Near the parade parade’s start in the Newseum and Canadian embassy areas (where Canadian choristers serenaded the crowd, singing the Canadian anthem, was it?)I found plenty of room at the fences to see the participants proudly march by: the high-stepping band members joyfully playing their instruments, the drum majors, the Indians on horses from Montana, the flag bearers of many nations representing the Peace Corps.

After a while darkness began its descent, and with it, even cooler temperatures which chased the few remaining onlookers away. You could not make out all the words on the banners announcing the bands. "Was that the Ohio State band?" a man next to me asked. Yes, it was.

Soon my pal Pam from Tennessee joined me, and she was all rested and refreshed from her long nap at the Indian Museum.

Sadly, when we left at 6:30 p.m. with clumps of frozen toes, few remained to see the majorettes, the contrast of the cops superimposed against the silhouettes of the Southern belles in formals (from Mississippi perhaps?), the Boy Scouts' huge flag, all the other magnificent bands, the carefully constructed flashy, glamorous floats. They were still marching by.

They also paraded in darkness for Bush’s second inaugural. Why can’t organizers do a better job?

How cold can you go?

If it’s going to be a dark parade, how about some lights so the marchers can see one foot in front of the other, and an onlooker can see a parade! That's not asking too much for a parade held once every four years, for participants from non-profits who spend hours raising money to travel, to march down Pennsylvania Avenue to the beat for a different drummer whose sound no one hears.

If a drum beats and no one hears it? What applause do they hear from streets populated only by cops protecting what?
Posted by Patricia Leslie at 11:44 PM No comments:

What is the significance of the bicentennial birthdays of Edgar Allen Poe, Charles Darwin , Felix Mendelssohn, and Abraham Lincoln in 2009?

From the Classics Literature Library comes this:

Edgar Allan Poe's ancestry on his father's side has been traced to Samuel Lincoln, a weaver who emigrated from Hingham, England, to Hingham, Massachusetts, in 1637. The president's forebears were pioneers who moved west with the expanding frontier from Massachusetts to Berks County, Pennsylvania, and then to Virginia. Abraham Lincoln's father, Thomas Lincoln, was born in Rockingham County in backcountry Virginia in 1778. In 1781 Thomas Lincoln's father, who was also named Abraham, took his family to Hughes Station on the Green River, 32 km (20 mi) east of Louisville, Kentucky. In 1786 a Native American killed the first Edgar Allan Poe while he was at work clearing land for a farm in the forest.

Posted by Patricia Leslie at 11:52 PM No comments:

The Movie: “Slumdog Millionaire” – A Must for Serious Moviegoers

Never, never, never (did I say “never”?) shall I see a movie again without consulting the Tomatometer which supplies an instant verdict on whether a movie is good or bad.

I point you to an earlier review, “Seven Pounds,” truly dreadful in every way and scoring a ripe 29% on the Tomatometer, to be contrasted with “Slumdog Millionaire” which received a 94% and is an incredible production.

Driving two miles to the theatre that night I struggled to keep my eyes open while thinking: “Self, you are dumb to go to the movies tonight when you are so tired for you will surely fall asleep.”

Throughout the performance my eyes flew out of their sockets several times and in one scene, with many others, I screamed. At the end some applauded.

This movie will win the Academy Award for Best Picture. It must.

Warning to the squeamish: It is not for you. Two seats from me a 20-something female left after 15 minutes, followed two minutes later by her mother (I presume), and then her father (I presume) after the mother retrieved him. Those who liked the faint-hearted, insipid “Seven Pounds” or movies like it will not be able to abide this. For those who love art, this one’s for you.
Posted by Patricia Leslie at 11:33 PM No comments: