On the program are:

The presentation is one of St. John's First Wednesday Concerts, always performed without charge and lasting about 35 minutes, beginning at 12:10 p.m.

St. John's was founded in 1815 and is known to Washington residents as the yellow church at Lafayette Square. It's often called the “Church of the Presidents” since beginning with James Madison, who was president from 1809 to 1817, every president has attended services at the church, and several have been members. A plaque at the rear of St. John's designates the pew where President Abraham Lincoln often sat when he stopped by the church during the Civil War. 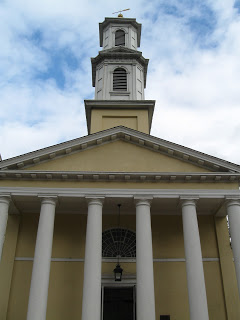 April 4: The premiere of Paul Leavitt's Fanfare for Trumpet and Organ by Lisa Galoci, organist, and Chuck Seipp, trumpet

May 2: Music for Angels, including Craig Phillips' Archangel Suite by Michael Lodico, director of music and organist, St. John's

June 6: Music by Women Composers, including Margaret Sandresky's Dialogues for Organ and Strings by Ilono Kubiaczyk-Adler, organist, with the U.S. Air Force Strings


Posted by Patricia Leslie at 11:37 PM No comments: 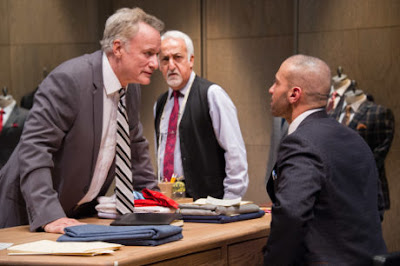 It's at the Mosaic Theater on H Street, easily accessible by the free trolley which runs up and down H, boarding behind Union Station, and it's a h-u-g-e show, amazing (!), really, really great.  It's beautiful with some very, very good laughs. A surefire winner!  And everyone loves a winner, right? 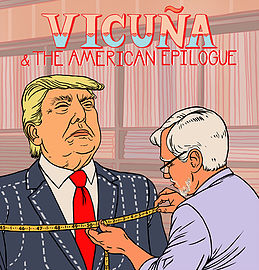 In Vicuña & The American Epilogue, John de Lancie is "Kurt Seaman," a really, really smart person and also a presidential candidate getting ready for a debate. Director Robert Egan ensures Mr. de Lancie is as non-p.c. and morally outrageous as possible, enough to inflame belly gut laughter from the audience which, at times, is so loud, dialogue cannot be heard. But, no matter, it's all part of the fun and the show's pleasure.

You will likely recognize Mr. de Lancie. His presentation and remarkable delivery will leave you wanting more.

The production concerns the egotistical candidate (with never a mention of comparison to the current president) who preps for his debate, in words and apparel, as a clothier, Anselm (Brian George), tries to outfit him in vicuna wool, a precious material whose cost makes it affordable for only the One Percent.  (Costuming by Brandee Mathies is a mite improbable since Mr. Trump does not wear brown and grey, but this is not about Trump, believe me.)

Complementing the fantastic comedy are incredible, amazing men and women, an all-star cast which leaves audience members in awe of their fast-paced dialogue and flawless memories.

First on the rung is "Senator Kitty" (Kimberly Schraf), who does a fantastic job and happens to be the head of the Republican National Committee who will pay Mr. Seaman an outrageous sum if he'll agree to withdraw from the race.  (Fat chance. Ms. Schraf is so realistic, she must have held elected office at some point.)


Laura C. Harris is Mr. Seaman's daughter, Srilanka (a tad more liberal than her dad), and Haaz Sleiman is an apprentice to his father.

The effective set (by Debra Booth) is a modern, fab-50s styled New York apartment with excellent use of an "elevator" center-stage, a handy device for quickly moving actors on and off the floor.

Jon Robin Baitz is the writer of this area premiere and the dark epilogue which is the world premiere here in Washington.

In his short three years at the helm of Mosaic after a departure from Theater J, Ari Roth's success leaves one marveling at what all he has achieved with one hit after another.  Congratulations to him and his staff.

Mosaic's mission statement includes: "Our plays speak truth to power and to the private parts of our soul. In short, we make art with a purpose and strive for impact." And that, playgoers, is what Mosaic has done again.  Bravo for theatre in D.C.!

And, while I am at it, the Atlas Performing Arts Center is absolutely stunning, comfortable, modern and more, a thoroughly delightful place to be and, easily accessible.


What: Vicuña & The American Epilogue

Getting there: Riding public transportation from Union Station on the streetcar is easy and free, if you can master the first hurdle, that of finding the streetcar behind Union Station. Signage in the station is inadequate. Parking options are available for those who wish to drive.

Language: Adult (but not much)

Duration: About two hours minutes with one intermission.

Posted by Patricia Leslie at 12:42 PM No comments: 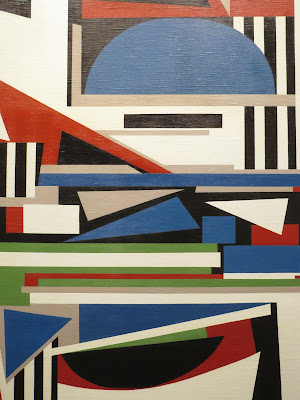 Mavis Pusey (b. 1928), Dejygea, 1970. Courtesy of Brock and Co. This piece debuted at the 1971 "Contemporary Black Artists in America" exhibition at the Whitney Museum of American Art. It illustrates Ms. Pusey's embrace of old, dilapidated New York structures and their architecture.  The museum label notes that early on, Ms. Pusey's work was frequently mischaracterized by museum curators as about "self" rather than the artist's environment she chose.


Looking for an indoor place to take your brood over the holidays?  Children (and adults) will be intrigued by what lies in front of them at the National Museum of Women in the Arts' new show, Magnetic Fields:  Expanding American Abstraction, 1960s to Today.  There discussions may be piqued by renderings which can trigger emotions and senses to include, but not limited to, humor, sadness, awareness, contemporary times, and whatever else one can detect and extract.

I guarantee you no one will find it "boring," not the young, not the "don't bother me" teenager, nor the dragged-along Uncle George who doesn't want to go anywhere or do anything.

With representations by 21 contemporary black female artists, the museum is proud to present the first U.S. exhibition by abstract artists of this genre.  Reading the labels and hearing the voices of the women who describe their backgrounds and experiences make attempted comprehension much more enjoyable.

They are "under-recognized" and "marginalized," says museum literature. The museum director, Susan Fisher Sterling, writes: "This exhibition shifts our attention to key practitioners who have not received their due" and are important to contemporary art history.

Named after Mildred Thompson's Magnetic Fields (in the show), a November 28 event will present two of the artists, Susan Snowden and Shinique Smith in public discussion. (See below.) 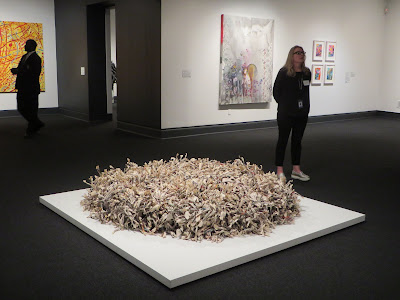 Maren Hassinger (b. 1947), Wrenching News, 2008, courtesy of the artist. Twisted and torn pieces of the New York Times convey the artist's representation of Hurricane Katrina in 2005 and its aftereffects which evoke "the poignant sociopolitical issues exposed in the wake of this natural disaster." Call 202-747-3417 and dial 205# to hear the artist speak about it/Photo by Patricia Leslie 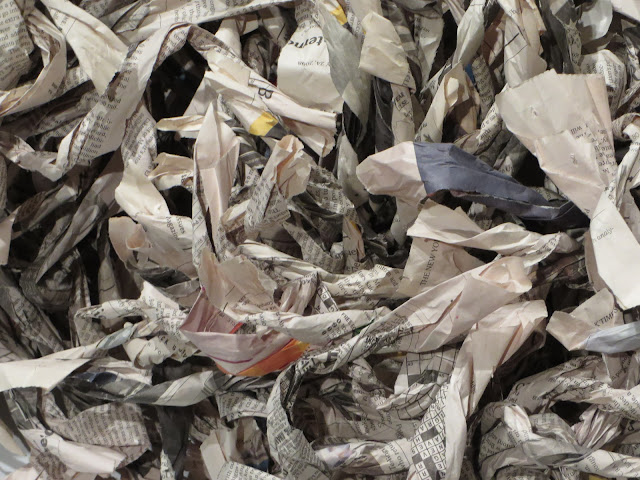 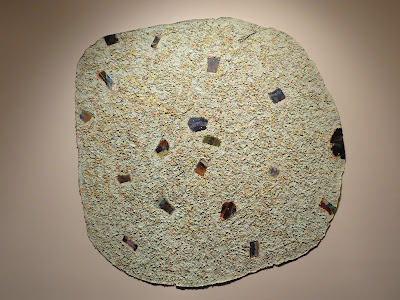 Howardena Pindell (b. 1943), Autobiography: Japan (Shisen-do, Kyoto), 1982, courtesy of the artist and Garth Greenan Gallery, New York. Using paint, collage elements, and hole-punched paper, the artist depicts her seven-month sojourn in Japan on a "friendship grant" and her attempts to save her memory after a serious car accident in 1979. Call 202-747-3417 and dial 209# to hear her/Photo by Patricia Leslie 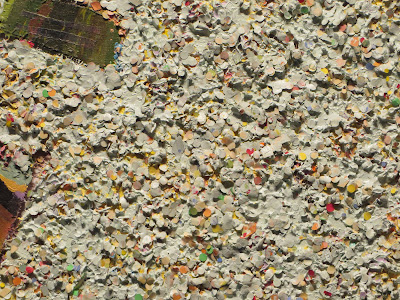 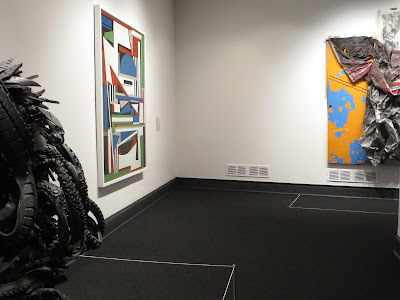 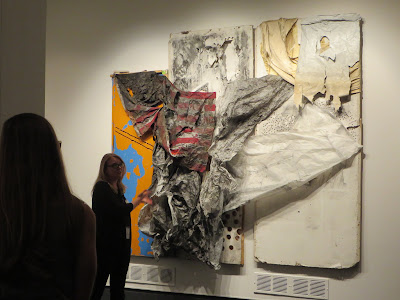 Abigail Deville (b. 1981), Harlem Flag, 2014, courtesy of the artist. Made from objects the artist found in Harlem and arranged to contrast and compare parallels between past and present/Photo by Patricia Leslie 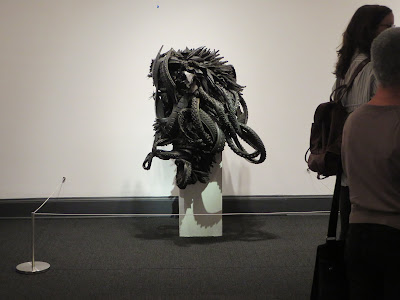 Chakaia Booker (b. 1953), El Gato, 2001, collection of the Kemper Museum of Contemporary Art. Since the early 1990s, Ms. Booker has used rubber tires which represent travel, industry, ecology, skin and muscle as her primary medium.  Here the "regal pose and aura of a feline" is depicted in The Cat. The artist sculpts herself daily with wearable art/Photo by Patricia Leslie 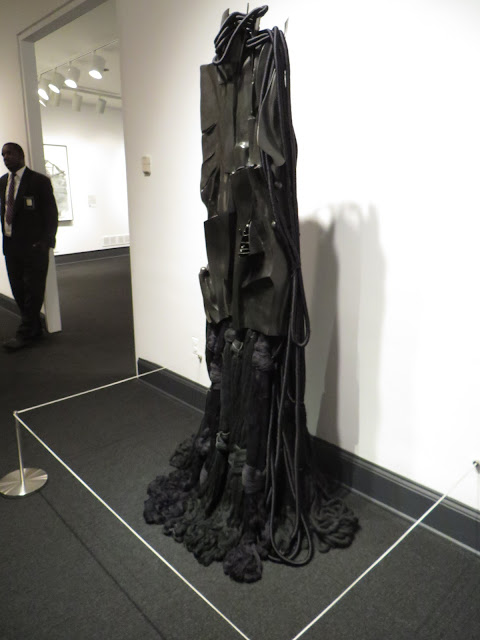 The name of Barbara Chase-Riboud (b. 1939), Zanzibar/Black, 1974-75, may be better known as a poet and author who wrote Sally Hemings, 1979. This is courtesy of Michael Rosenfeld Gallery and "exemplifies the artist's interest in developing monuments dedicated to transformative individuals and places."/Photo by Patricia Leslie 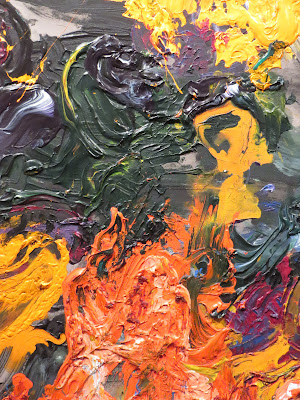 Sylvia Snowden (b. 1942), June 12, 1992 is the wedding anniversary of Ms. Snowden's parents who, with Howard University, the artist credits for helping her succeed in the art world.  This was part of a series which was on exhibition at the National Museum of Women in the Arts in 1992 and is hung courtesy of the artist. Call 202-747-3417 and dial 214# to hear Ms. Snowden speak of this work/Photo by Patricia Leslie 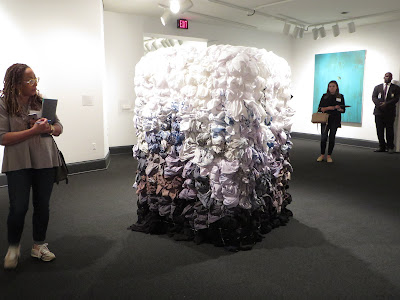 Shinique Smith (b. 1971), Bale Variant No. 0017, 2009, Denver Art Museum Collection.  Fabric, wood, ink, twine and ribbon comprise the sculpture. The artist weaves her own clothing and pieces she finds "to visualize the tension of accumulation and consumption."/Photo by Patricia Leslie

At the exhibition's opening Virginia Treanor, NMWA associate curator, called the museum "a natural platform for an exhibit like this." Several of the artists were born in Washington and Baltimore where some reside. Some graduated from Howard University.

"This is not a survey," Ms. Treanor emphasized in her opening remarks, or "meant to be comprehensive."

Curators were Melissa Messina and Erin Dziedzic, director of curatorial affairs at the Kemper Museum of Contemporary Art in Kansas City, Missouri.

In conjunction with the show, Sylvia Snowden and Shinique Smith will speak at the museum November 28 from 6:30 to 8:30 p.m. Guests pay $25 ($15, members, seniors, and students) to mingle with the artists, see the exhibition and other collections, and enjoy food and beverages. It is close to a sellout. Make required reservations here.

A 144-paged illustrated catalogue is available in the museum gift shop and online.


patricialesli@gmail.com
Posted by Patricia Leslie at 3:23 PM No comments: 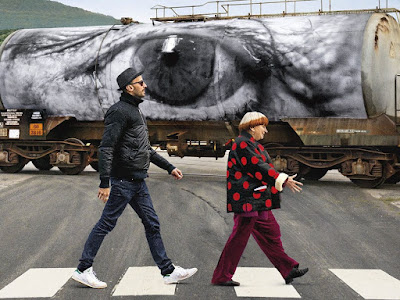 So much for Rotten Tomatoes and its "100 percent" approval rating.

Agnes Varda may be the greatest filmmaker out of Belgium since, since...(who?) but that still doesn't make her 2017 documentary of rural France any better.  Zzzzzzzzz.....

Faces Places is a constant refrain of frame after frame after frame of Ms. Varda, 89, traveling around France in a big van with a "mysterious" photographer, "JR" (that's all), 33, who together take pictures, blow them up, and paste them to barns, trains, walls, whatever is handy.  Cool!

Ta da!  That's it!  No plot, no drama, no upbeat to this tune except he wears dark sunglasses at night and all the time!

It's one of those movies you keep telling yourself it's going to pick up, pick up, pick up, but it never does, and lies flat like the train tracks. (The next time I tell myself that, I'll know it's the signal to VAMOOSE.)

Faces Places is 89 minutes long which matches Ms. Varda's age! Imagine! About 80 minutes too many.

Dullsville, lacklustre, you catch my drift. It would make a good drugless sleep aide since it works wonders in about 10 minutes.

Take my words for it and save your time and money and forget about Rotten Tomatoes!  You know critics:  They like films like that lifeless, depressing cat movie of 2014,
arty-farty films which earn zero return because they are public flops. But the producers don't make them for the money.  Oh, no:  They do it for the art!  Yeah, right. And Donald Trump doesn't tweet.
patricialesli@gmail.com

Posted by Patricia Leslie at 11:14 PM No comments: