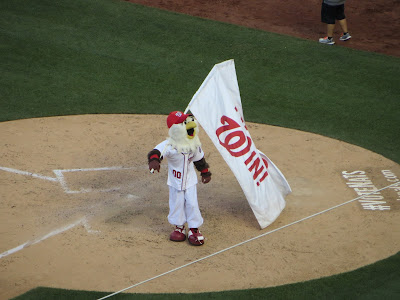 When you read WAPO and game summaries, do you have trouble understanding what actually happened at the Nats' baseball games?

Do you ever think the WAPO writers are trying to outjockey T.S. Eliot, James Joyce, and William Faulkner, combined? Me, too.

Therefore and here below in living English, mostly, (with some poetry thrown in) is what happened at Sunday's game, Nats v. Phillies. 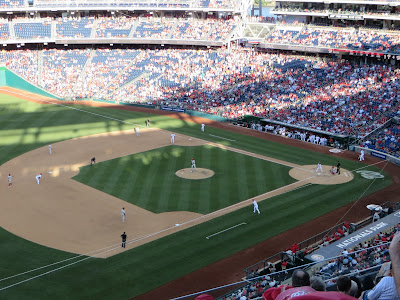 It was a perfect afternoon for baseball (well, almost, depending on whether you were sitting in the shade or the sun).

Phil fans were there, of course, in great numbers but not in the vast amount of conspirators they've been known to occupy in our quarters, ever since we took back our stadium from the upstarts. 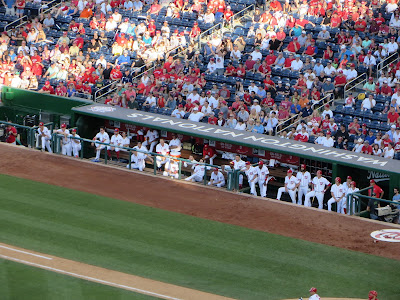 In the ninth the Nats straddled the fence, watching and waiting for a win /Photo by Patricia Leslie

Shadows were growing on the field towards the end of the game. It was the beginning of the ninth and we had watched the Nats' lead (3-0 before the fifth) shrink during the afternoon when the Enemy scored once in the fifth and twice in the sixth to tie the game.

In all their wisdom, the Nats' brought in closing pitcher Papelbomb who, yes, threw a home run in the ninth. Thanks, Pap!

(He's the one everyone hates since he tried to strangle our star player, Bryce Harper, in the dugout last year.  This is a true story. In the dugout!  Our starring guy!  Never mind a star's murder in the dugout.  Who was watching?  Oh, just everybody since it was telecast only live on TV!  Who will ever forget that?  We won't forget it, no matter how hard Nationals' management tries to make us.)

After Werth's big hit in the bottom of the ninth, the team chased the Super Star out on the field/Photo by Patricia Leslie

In the ninth at the Nats.

On Sunday it was rather disappointing, even though the Nats were having a great day, that Bryce wasn't playing. The players can't play every day.  They got to have a day off, right?  Even though it was my first game of the season.

Okay, so closer Papelbomb throws his home run in the ninth (I realize this has already been said but it bears repeating), and away the Phils go with the lead, just like that!

We get to the bottom of the ninth with the score, 4-3.  We are holding out breath.  We have all watched this show before.  It happens. 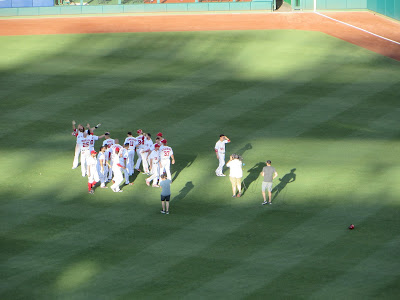 Those are Werth's hands, too, in the air thanking the heavens for a thrilling win/Photo by Patricia Leslie


Out from the dugout there came a big splash,
a Star and his bat, it made my heart crash,
My son did exclaim, and he shouted for joy!
"They're bringing in Harper! He is our fast boy!"

When what to my wondering eyes should appear
But Bryce Harper, his bat, confronting the Phil,
With his big, bold hit on the bat I just knew
He raced to first base, bypassing a shoe.


Elvis had arrived!  Died, gone to heaven and come back, straight to Nats stadium.  Back from the dead!  There he was!  Mr. America!


The stands erupted in melee when Bryce came out of vacay to hit. 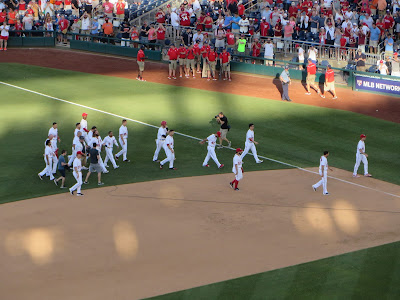 Off they march to the dugout to find the jug of Gatoraide (?) to pitch on Werth/Photo by Patricia Leslie

Bryce got to first, and Danny Espinosa soon followed.

We still had high hopes of beating that awful Pennsylvania team, especially since the Pennsylvania Industrials had beaten our precious Caps way back when.

Now we had a man on first and second, and Bryce was the tying run.

Ecstasy (without drugs) and no one suspected the other cool surprise which lay ahead. (Baseball is full of surprises, not all of the good kind.)

The supply of Nats pinch hitters seemed endless, and the outs were two.

As I looked at the field and was turning around,
there came the Old Man up to the mound,
He was dressed in the right colors
from his head to his toe
He got ready to deliver the last, fatal blow

His eyes - how they twinkled! his dimples how merry,
His cheeks were like roses, his nose like a cherry;
His face was hidden by lots of red hair
Which fell down behind him, a chill Phil nightmare

Lo and behold, I tell you the facts, the "Old Man," the savior who, in a totally independent data-driven study by three scientists, was found to bear a remarkable resemblance to Jesus Christ Superstar, comes out on the mound, to an exploding stadium, filled with standing and screaming fans heard as far away as the Washington Cathedral (confirmed by the gargoyles which hang around outside).

The Phil pitcher took it to a full count, and

We wheezed, and we breezed,
and we made our pleas, please,
to our man on the mound,
our Hercules.


Werth breathed slowly, to match his pace. (You ever seen him walk out to position?  He is slower than Metro on a slow track day.)

We stood and watched.
There was no time to pray.
We heaved, and we sighed.
We wanted our way.

When out on the lawn there arose such a clatter
Which showed to the nation that old men do matter
Over the tops of their heads
And exceeding arms' length,
Werth hit it and sent it beyond Phil boys' strength


Werth shot out that last pitch which skidded between second and third, and Harper and Espinosa raced home, Bryce running to home plate from third and waving his arm around and around like a wheel on a locomotive at 200 MPH, urging Espinosa to "bring it all home, boy!"

Meanwhile, Werth was still running for his life, since Pap was chasing him with the rest of the team beyond first base into the great unknown, to screams and yells like the rest of us, Werth losing his helmet on the way.

On, Pappy!
On, Solis!
On, Harper
And Heisey!

To the top of the wall
To the rim of the fence
Now, dash away!
Run away!
This is how to play ball!


And I heard them exclaim,
Ere they soared outa sight,
Happy Baseball to All,
and to All a Good Night!

Posted by Patricia Leslie at 6:26 PM No comments: 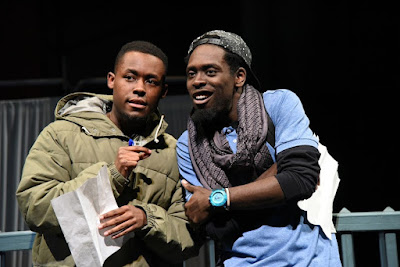 From left, Vaughn Ryan Midder is Jeron and Jeremy Keith Hunter is Devaun in When January Feels Like Summer at Mosaic Theater Company, now through June 12, 2016/Photo by Stan Barouh

At intermission I turned to my seatmate and said:  "I love this!" And I wasn't the only one.

Laughter from the audience sometimes drowned out the dialogue, and that was okay!  Everyone was having a good time, even a woman near the front who said she couldn't hear.

Never mind. It's time to leave our worries behind us and enjoy. 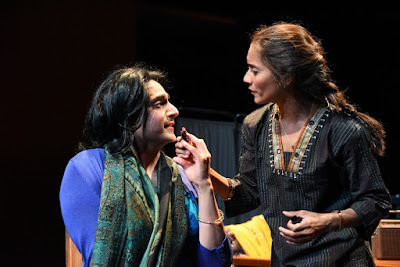 From left, Shravan Amin is Ishan and Indira, and Lynette Rathnam is Nirmala in When January Feels Like Summer at Mosaic Theater Company, now through June 12, 2016/Photo by Stan Barouh

Mosaic Theater Company's When January Feels Like Summer now onstage at the Atlas Performing Arts Center on H Street is sheer delight, so much fun from beginning to end, with never a laggard in it, as it zooms into the stratosphere right from the get-go when I had experienced a mental quick flash a few seconds before liftoff of "Oh, no. Not another 'message' play. Haven't we had enough of these already?"

(But when is a play not a message play?)

And before the thought could finish its roll through my brain, it collapsed mid-sentence, overcome by January and the rockin' New York subway and two hip lads (Jeremy Keith Hunter who is Devaun, and Vaughn Ryan Midder is Jeron) jumping on the train and the rumble, jumble of lives of five New Yorkers begin to unfold. (David Lamont Wilson's sounds help to quickly reproduce the Big Apple in January.)


It doesn't take long for alll the actors to meet and cross paths.  Besides Jeron and Devaun there's Nirmala (skillfully presented by Lynette Rathnam), Ishan and Indira (an incredible metamorphosis by Shravan Amin), and Joe (Jason B. McIntosh, a reject who portrays his loneliness with distinction).

Without question, the show stealer is Mr. Hunter. He and Jeron discuss current issues and how to woo women. Devaun's training techniques are a riot.

Which brings me to question the frequent costume changes for the two young men.  Designer Robert Croghan dressed the duo appropriately enough, but why so many outfits?

January's got "contemporary language" all right with F and S bombs aplenty, but in this modern-day setting, the bombs fit, and are not as offensive as those heard in settings where they add nothing to content.

The various props from difference scenes (by Debra Booth and Michelle Elwyn) generally remain stationary on stage and go dark with scene switches, not as distracting as it may sound.  Speaking of, the mechanical breathing machine for the invisible patient on life support behind the curtain with the red blinking light is memorable and lives on!

As the end of the evening approaches, you wonder and gasp:  Will he or won't he? And I doubt anyone guesses what happens next.

Cori Thomas's play embraces contemporary issues at a fast pace, meaning dialogue which doesn't languish and allow your mind to escape.  It opened Off-Broadway in 2014 and won a New York Times Critics Pick choice and earlier, an American Theatre Critics Association award for new play by an emerging playwright.  That tells you something, right?

You won't leave the play down in the mouth or wondering "what was that all about?"  You'll be skipping down the sidewalk, smiling and laughing with the rest of the theatergoers who pondered the exchanges just seen, but perhaps the lady doth flatter too much.

We can journey into the lives of others and may find a reason or two to be more respectful of them who differ from you and me on the street, in the shops, or on the Metro, but ain't we all got stories?  Funny ones, at that.

The new Atlas Performing Arts Center is an excellent venue with a large lobby and comfortable, stacked theater seating so none is bad or blocked.  And there are ample stalls in the women's restroom for a speedy in and out! Amazing.

The only thing I would change about the whole affair is the title of the play: Rather droll for all the lively content, like a dull book title and equally boring jacket that no one stops to pick up from the bookstore table.

With only a single week left, there's a rush on H Street.

What:  When January Feels Like Summer by Cori Thomas

Advance valet parking reservations available for $20 or park for free on the street like I did (on a Sunday).

How much: Tickets start at $40, but there are discounts for seniors, students, military, first responders, neighbors, those under age 30, and rush tickets for $25, if any seats are left 30 minutes before show time,

Duration:  Two and a half hours with one intermission.

patricialesli@gmail.com
Posted by Patricia Leslie at 11:55 PM No comments: