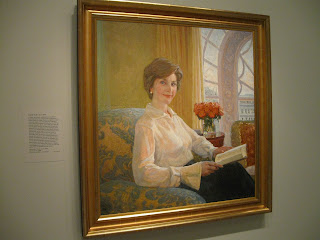 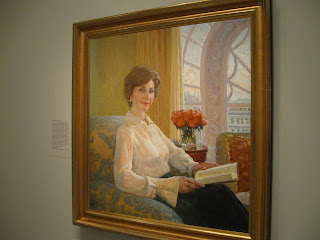 By the Queen of Free
She is pretty, no doubt, but the painting makes her appear about 20 pounds slimmer than the photos of her I have seen over the years. My, what a slender neck you have!
Perhaps the artist, Aleksander Titovets, a native-born Russian who lives in Texas and paints Southwestern landscapes among other subjects, wanted to flatter his subject.
Which brings to mind: Why was a Russian-born artist selected for the commission anyway? Texas does not have American-born painters who do portraits? Just asking. Perhaps he is friends with fellow El Paso residents, the J. O. Stewarts, who donated the painting saving taxpayers $40,000, reported CNSNews.
Whatever. The painting is too busy: An arched window with panes opening to what is likely the Treasury building, a bowl of fully opened salmon colored roses, a color which is repeated throughout the painting with handsome effects, and two (that is two) chairs with conflicting patterns all compete to almost smother Mrs. Bush, who sits with open book in hand in one of the chairs smiling (almost with her husband’s smirk) at the viewer.
Please, I need to catch my breath!

Breaking up the cacophony is a long camel-colored drape hanging behind her which outlines (on one side) a blank wall in the upper left quarter of the painting. It is the only section without objects.
With its warm, pastel colors, the portrait is a nice, harmless impressionistic style much like Mrs. Bush herself, I would imagine. To brighten any room, it is one I am certain the First Family would welcome in their new Texas home.
Mrs. Bush hangs on the first floor to the left of the entrance on G Street, catercorner from the gift shop. Yes, worth a trip! Happily, the Portrait Gallery is open daily until 6:50 p.m., but it starts later than most museums: 11:30 a.m.
Posted by Patricia Leslie at 6:17 AM No comments:

The Movie: "Seven Pounds" (of Flab)

Honestly, it was just so terribblllllyyy bad!

I wanted to leave before the half to go to the lobby and watch popcorn cascade from the aluminum pan into the big container below (which would have been more interesting), but trying to be considerate to my cousin (who likes all movies) and her daughters especially during the holiday season, I stayed. Being nice sometimes just isn't worth it.

When I described it to a friend she asked: "Was it a comedy?" We could only wish.

Would you like to know a new way to commit suicide? In addition to completing mental suicide when you see this thing, a new physical way to kill yourself is presented along with illustration.

The best is saved for last in a bath tub which, in retrospect, has me drowning in laughter.

The only redeeming social factor is Will Smith's body and even seeing this movie for free is not worth that. Well, yes, some of the music is okay but not to abandon two hours of your life to see tripe.

Do you catch my drift? To think I actually paid cash to see this! Moan and groan.

There cannot be any doubt, dear Readers, that the writer/producer of this bowl of concrete put together words and searched for a star who would be foolish enough to star in a plotless film which moves in slow motion.

In this economy, in any economy these takes are intended for the recycle pile which actually is too good a place for it to land since it might mean we'd have to see portions of it, God forbid, again.
Posted by Patricia Leslie at 1:30 AM No comments: 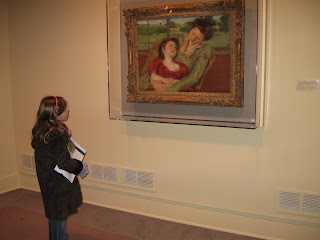 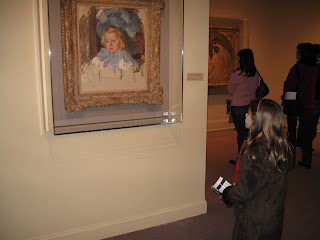 By the Queen of Free
Not to be confused with the exhibit, "Role Models: Feminine Identity in Contemporary American Photography" at the same place which is not mild and bland.
At least, that was the impression two women whom I presumed to be volunteers gave a 9-year-old friend’s daughter and me upon entrance at the National Museum of Women in the Arts on a free Sunday recently.
They hesitated and directed us first to the Cassatt exhibit.
Upon climbing the marble stairs we met a chicly dressed visitor from a foreign land (France? Belgium?) who looked at me sternly and said “This (‘Role Models’) is not for her” nodding first to the child and then, to the contemporary photography exhibit. (And you thought Americans were conservative.) I thanked her.
Golly gee, if an exhibit is that graphic, should signs be posted? (“This exhibit is rated XXX.” Think of the crowds who would flock!)
I welcomed the warnings which spared us from possible embarrassment and, likely, my certain death at the hands of the girl’s mother had we seen the show. Better to be safe than sorry. Besides, there was harmless Mary Cassatt adjacent. (Has anyone ever called her works ‘dull’?)
Nothing controversial about her paintings and etchings in the small show which is all about friends and relations. (The title is: "Mary Cassatt: Friends and Family.") Did Ms. Cassatt ever paint any men? The paintings are the pastel colors with the idyllic expressions and poses you visualize when her name is mentioned. Rather robotic with little evidence of consternation other than one of a relative who grimaces slightly. It's like all the subjects are getting ready for naps. They are painted in the style of what was idealized and expected of women at about the same time the Women’s Suffrage Movement was gearing up and women were being arrested for demanding the vote! Imagine.
What's the saying? "Well behaved women never make history? (Who said it? Laurel Thatcher Ulrich and she was?) Well, Mary Cassatt proves her wrong.
Anyway, I enthusiastically anticipate returning to see Strong Women who always inspire and instill me with energy, vigor, and happiness. I have seen enough of Quiet Women in places besides museums.
Posted by Patricia Leslie at 8:24 PM No comments:

Labels: Mary Cassatt, National Museum of Women in the Arts

If you are looking for a cheery spot over the holidays, if you need a bit of a psychological lift amidst all the Christmas cheer, this is not the exhibit to visit.

Anyway, if you want your daughter to grow up to be a body builder not, take her to this exhibit and take a gander at the two photographs of female muscle giants. Yeeks! My gender stereotypes shaped my impressions to put it mildly.

Photographer Alec Soth shows all grim women, heads tilted, meaning ? , their heads are not on straight? Jocelyn Lee's photographs are mostly women, some boys and an old man in environmental settings.

Up too close for comfort and way too personal are Martin Schoeller's Jack Nicholson (immediate words which spring to mind are “The Shining” and “The Old Cuss”), Barack Obama (“handsome dude”), John McCain (his bloodshot eyes and other age realities make him look far older than you've grown to know him), and Angelina Jolie (how many lip injections?).

It’s a sad, depressing world we occupy nowadays, and and these photographs bear testimony to the whole negative lot, especially Katy Grannam’s child in an adult prison in New York (is this still lawful?) and a few which show female veterans and the dreadful psychological effects of war.

The artists took many of the photos on assignments for the New Yorker, Esquire, and the New York Times magazine. This exhibit is not to be confused with the magnificent “Women of Our Time: 20th Century Photographs" show in another wing. More on that later.
Posted by Patricia Leslie at 11:45 PM No comments:

Christmas at the U.S. Botanic Garden 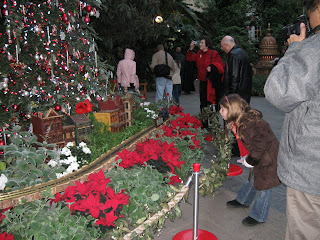 No matter how many times you have been, the glory and peace of the Botanic Garden is a cure for what ails you in the middle of a wintry afternoon with no sunshine and grey skies.

The soft lighting, the contemporary quiet music which meshes into the background like so many of the ferns, the whispers of the crowd, the colors, the gigantic tree beautifully decorated, the leisurely pace of the visitors, the artistic works here and there and green green everywhere, mix to soothe troubled minds and bodies.

I call it a "salve of peace" unlike that found anywhere else in D.C. Even the exterior of the building adds fitting elements to the serenity.

It helps to accompany a child to the Garden and see more of the wonder through her eyes, but she is not vital to enjoyment.

They fascinate all the big and little ones as they weave terrific preludes to “The Polar Express” showing down the street at IMAX at the Natural History Museum where most of the audience is adults, and I know why: We want to believe. Go and see for yourself and tell me I am wrong.
Posted by Patricia Leslie at 9:57 PM No comments:

Must See: Abraham Lincoln at The National Portrait Gallery

The Kate Guenther and Siewchin Yong Sommer Gallery housing the new Abraham Lincoln exhibit of photographs, prints, and a wood engraving of the Emancipation Proclamation at the National Portrait Gallery has the ambience of a funeral parlor: The lighting is low, and the mood, somber and subdued among the many visitors who were young, old, of many nationalities and interests when I dropped by. (Several Capitols hockey fans identified by their big red jerseys stopped in on their way to a game.)

The gallery is not large, and the etchings and lithographs of Lincoln big and small are well worth a trip. That the artifacts are all owned by the Smithsonian Institution is astonishing.

Photography came of age during Lincoln’s tenure, and he willingly obliged many requests to be recorded on film, glory be.

In one of the last prints made before his assassination April 14, 1865, Lincoln is labeled a “messiah.” Tad, his son whom Lincoln spoiled especially after the death of his beloved son, Willie, is shown with his father in another “last one” dated February 5, 1865. One photo shows Lincoln with Frederick Douglass, the first African-American to visit the White House.

The exhibit continues the perpetuation of the negative depictions of Mary Todd Lincoln in photographs and words. (With all the many omnipresent evil descriptions of her, it is easy to compare her to Eve and taking another step, blame Lincoln’s downfall on her, but I imagine that's already been done. Is there anything positive about her? He married her.)

An accompanying description for another print says Lincoln was hesitant to speak much publicly, aware of the importance citizens placed on his words.

Why the name of the exhibit “One Life: The Mask of Lincoln”? Yes, there are two masks made of his face, one before the war (1860), and the other after (1865), which visitors may see close up, and which clearly demonstrate the effects of war on a president, but the title suggests a dark environment which Abraham Lincoln's legacy contradicts. Ask Barack Obama.

Lincoln’s Second Inaugural Ball was held March 4, 1865 in the very same building of the "Mask" exhibit (oh, what a lovely hall for an upcoming ball) and another exhibit on the second floor about his inauguration make a fitting tribute to the president we hear more about daily as the momentum for the celebration of his bicentenary birth on February 12, 2009 builds.

Except for Christmas Day the National Portrait Gallery is open daily from 11:30 a.m. until 6:50 p.m. when the guards begin throwing visitors out quickly. It is located across from the Verizon Center at the corner of 8th and F streets, N.W.

While at the exhibit cell phone users may dial a number to receive more explanation including the reason behind Lincoln growing a beard. Many of the images and labels are available online at the Portrait Gallery's web site.
Posted by Patricia Leslie at 11:45 PM No comments: