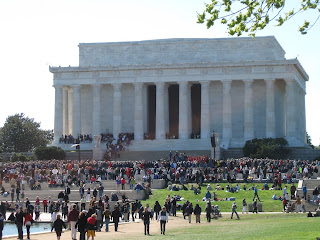 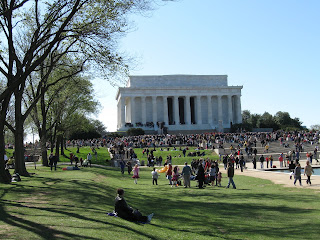 Au contraire Washington Post, there were more than 2,000 persons who attended the Marian Anderson Memorial Concert at the Lincoln Memorial Sunday. Look at the pictures. I would say double 2,000.

The music wafted across to the World War II Memorial which fed listeners to the concert which, it did seem to be true, was unknown to most (based upon observation) until they got within good listening distance.

None of the performers could be seen by more than the few who surrounded them in a semi-circle below Abraham Lincoln. (Or at least I think it was a semi-circle for I could not see either.) Jumbotrons would have increased listening pleasure, that’s for sure.

Some listeners brought folding chairs; others, dozed on towels and blankets. Most of us stood.

On a gorgeous Easter Sunday the beautifully strong music brought peace, happiness and gratitude for Ms. Anderson and Eleanor Roosevelt.

A handsome program printed in gold tones on heavyweight slick stock added to the day's dignity, augmented by a naturalization ceremony for new citizens.

The program carried a half page apology from the Daughters of the American Revolution which offered up its mea culpa once more (how many times over the 70 years?):

[T]he DAR deeply regrets that Marian Anderson was not given the opportunity to perform at Constitution Hall in 1939, but today we join with all Americans to honor her memory and commemorate a pivotal event in the struggle for racial equality.

Consider the alternative: What if Marian Anderson had been permitted to sing at Constitution Hall in 1939? Would she still be included as one of the renowned civil rights pioneers?

Her singing in 1939 on Easter Sunday at the Lincoln Memorial would not have become "one of the early, defining moments in the history of protest against racial inequality in America." The DAR says it "is proud to demonstrate that change is possible."
Posted by Patricia Leslie at 11:17 PM No comments: 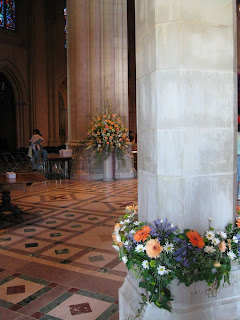 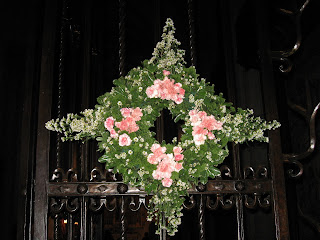 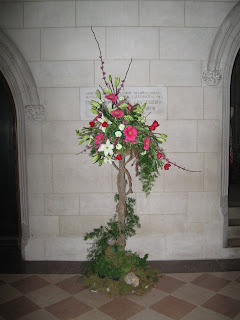 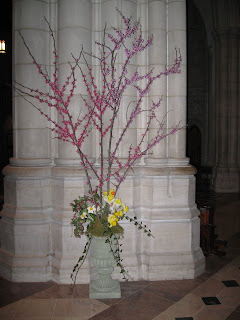 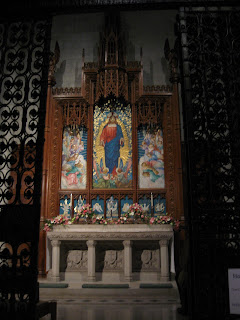 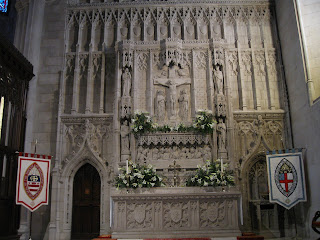 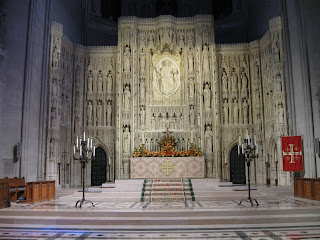 Posted by Patricia Leslie at 11:21 PM No comments: 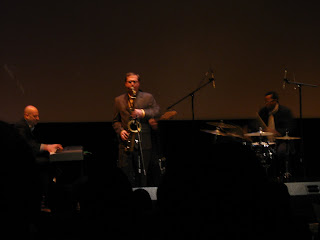 Lorin Cohen, the bassist, is obscured by Geof Bradfield, the saxophonist 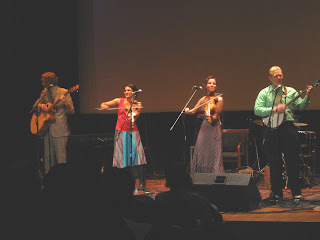 By The Queen of Free

Only the State Department would pick a group from Brooklyn, New York to play music from Appalachia on a world tour.

True, the Appalachian Mountains string (!) from the Mississippi to Canada, but come on now: Does New York come to mind when you hear "Appalachia"? Mine, neither. The folks down South play fiddle and bluegrass a whole heckuva lot better than what we heard at the Grosvenor Auditorium Thursday night.

The Hoppin' John String Band was one of two groups who performed at the National Geographic auditorium at 1600 M Street, courtesy of State which hires musicians to perform for us all over the world trying to win friends and influence enemies as part of its "Rhythm Road: American Music Abroad" program.

First up was the dynamic, impressive Ryan Cohan Jazz Quartet from Chicago who started off the evening with Thelonius Monk's "Around Midnight." They played Victor Feldman's "Joshua," but the most memorable, haunting selections were composed by Ryan Cohan, the pianist. Geof Bradfield played saxophone, Lorin Cohen, bass; and Kobie Watkins, drums and percussion.

The group answered questions from the audience afterwards causing Hoppin' John to start 30 minutes late, or maybe Hoppin' John was late and Ryan Cohan was filling time. No one directing the program seemed to be in much of a hurry.

The auditorium was about 75% full with listeners ranging in age from low 20s to senior citizens.

The Hoppin' John musicians (Alicia Jo Rabins, Sarah Alden, Sean Condron, and Taylor Bergren-Chrisman)were good, but as vocalists? No. No authentic mountain music was heard. None of the vocalists showed much depth or style. They lacked that special somethin'.The program stated the band "performs and teaches music deeply rooted in the ballads, fiddle tunes and traditions of the Appalachian Mountains." They ain't hill people! (But maybe the Hill People think they are.)

I hope listeners knew it was not bluegrass like you hear in the South. But if you've never heard bluegrass in the South (the State Department?), how would you know? I missed the mountain twang and sound that Nashville residents hear every day listening to musicians play on the sidewalk hoping to "break in."

Perhaps there is a State Department-New York connection (Jazz at Lincoln Center). Perhaps the State Department in its showcase to the world needs to venture outside the confines of the Beltway and New York City, and head in a different direction for variety and diversity. Like maybe the hills of Tennessee or Kentucky or West Virginia.
Posted by Patricia Leslie at 8:16 PM No comments: 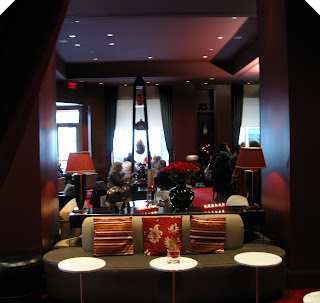 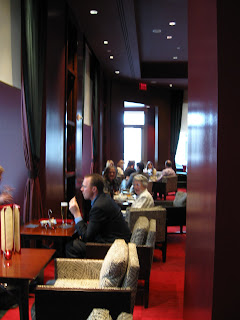 It started off badly with a collision between my elbow and the beer on the tray the waitress was carrying behind me, with beer splattering on my coat, my purse, the chair, the table.

Did anyone say “I am sorry”?

Did the staff clean up or offer to clean up?

Did anyone bring a towel?

Not until I asked.

From there it went to a limeless Corona. When have you ever ordered a Corona which was delivered sans lime?

The only other time it happened to me was at le bar in rural Tennessee.

Anyway, I suppose the ambiance makes up for mishaps at Le Bar at the Sofitel Hotel at the corner of 15th and H.

Go with a fat wallet: a glass of white Zinfandel at Le Bar was $12. The “Mediterranean platter” ($16) came with adequate hummus and pesto, all right, but inadequate pita which means you order more pita which means an additional $3. I know, I know, it’s downtown D.C.; just thought I’d warn you.

No charge for dumped beer.
Posted by Patricia Leslie at 12:44 AM 1 comment:

If you’ve never seen it, you are in for a treat.

Lots of action, color, whimsy, a good plot, and music define the return of this wonderfully delightful presentation of Arena Stage.

The voices! The hats! The costuming! They will keep you enthralled.

I had a great time and especially favored the omission of an intermission which seemed to make the production livelier, but how?

Just to see the hats and gorgeous dresses is well worth the price of admission (as low as $27).

My friend Claire did not think it was as sharp a production as the one she saw several years ago, but it charmed me.

Initially, I feared the voice of Zurin Villaneuva (Yolanda) might not meet expectations, but she soon proved me wrong. The sporadically visible musicians on elevated platform in mid-stage added a lot of flair and dynamics, and the constantly changing entrance doors gave way to new suggested sets in clever fashion.

The lovely Lincoln Theatre and its history help explain a portion of the show's karma which infused the audience on opening night with positive vibes right from the beginning. And Ben's Chili Bowl next door got us off rompin being that I was high-fivin' it with the cashier while I waited on my order.

The Lincoln and Ben’s are part of Adams-Morgan and the U Street neighborhood which can energize the comatose with their different shops and people, and explains why I was dancing down the aisle before showtime.

Just go see "Crowns" yourself now, and tell me you didn't have a good time. Hurry up: It ends April 26.
Posted by Patricia Leslie at 11:16 PM No comments: 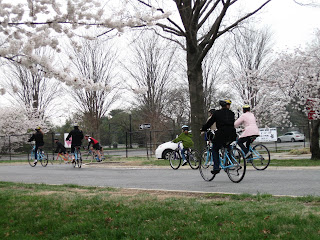 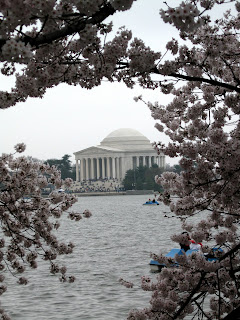 An energetic, enthusiastic tour guide, Erica, who had only been on the job a week, led a group of 17 bikers from the 12th Avenue “Bike the Sites” shop at 1100 Pennsylvania Avenue over to the Tidal Basin and beyond last week on a grey, drizzly, cool day to see the cherry blossoms in their glory.

Despite the weather it was a delightfully good day to ride and see Washington’s springtime beauty. And for the time involved (two hours) it beats walking or riding in a car because we saw so much.

From the Tidal Basin we skipped over to Hains Point and even on a weekday saw few parking spaces. We rode to the tip of the Point and back to the front of the Jefferson Memorial taking in some of the what seemed to be highly inappropriate music being performed on stage: country rock. From there we weaved in and around hundreds of pedestrians around the Tidal Basin, and following protocol, Erica said, walked our bikes through the FDR Memorial. A few moments later, we stopped at the Japanese Lantern, the official site to launch the festival every year, Erica said.

She made stops every so often to give us a chance for a drink of water, to catch our breath (I guess, although the flat surfaces left no one breathless, I don’t think) and to tell a brief history and description of many sights we could see: the Jefferson Memorial, the old cherry blossoms with their knotted and curling trunks, and from across the Potomac River, the Air Force Memorial and the Pentagon.

It was a glorious tour with the only negative, the many, many tourists along all the trails making some stretches dangerous as we rode, and sometimes walked, in single file.

Except for me, all bikers were tourists with several in family groups ranging from about age 6 to mid-60s. To me the cost exceeded the value and would be more reasonably priced $5 less than the $32 charged adults to get more bang for your bike.

For the fee you get a bottle of water, a helmet, a bike, and a bag attached to the bike for carrying valuables plus the tour, however, contrary to the Washington Post Grab and Go Guide March 27, no snack was offered.
Posted by Patricia Leslie at 10:22 PM No comments: