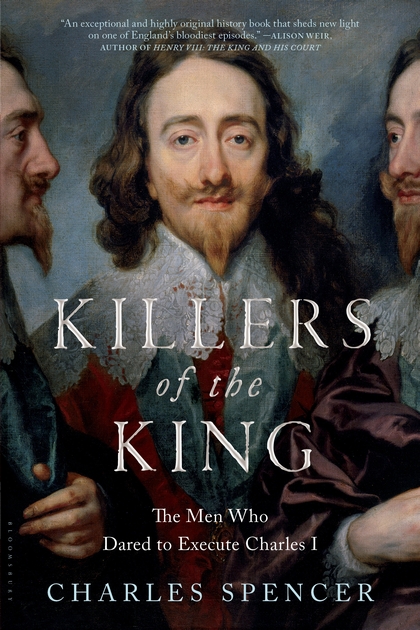 This anniversary of a king's beheading is not to be forgotten by supporters who will lay wreaths at the statue of England's King Charles I (1600-1649) today, not far from his execution site, says the Royal Encyclopedia.

Killers of the King: The Men Who Dared to Execute Charles I by Charles Spencer lays out all the gory details of his death and his trial, followed 11 years later by the worldwide manhunt for the regicides, conducted by Charles's son King Charles II when royalty was restored to the throne in 1660. 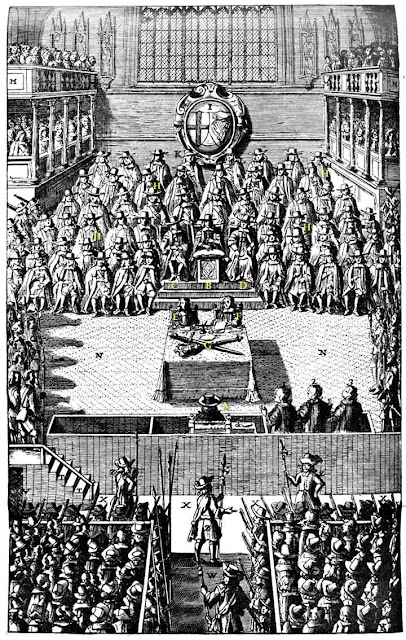 With his back to the viewer, Charles I, seated in the center, faces the High Court of Justice in 1649/Wikpedia, public domain.Engraving from "Nalson's Record of the Trial of Charles I" in the British Museum. Plate 2 from A True copy of the journal of the High Court of Justice for the tryal of K. Charles I as it was read in the House of Commons and attested under the hand of Phelps, clerk to that infamous court / taken by J. Nalson Jan. 4, 1683 : with a large introduction. London: Printed by H.C. for Thomas Dring at the Harrow at the corner of Chancery Lane and Fleet Street, 1684.
It was treasonous to house the king's killers or even think about killing him and so, off with his head (sometimes hers)!
Which is what happened to at least ten of them.

Charles was not a good king, he was not a great king but a greedy king, a king who was arrogant, extravagant, conceited and, to top it off, married to a Roman Catholic.

It was his way or the highway when it came to wars, the Scots, religion, and Parliament. He treasured his vast art collection, funded by his subjects about whom he cared little.

All the regicides were ordered to surrender, and some did, thinking their lives would be spared. Hell hath no fury like a son whose father has been beheaded.

Some were beheaded anyway, confound those promises!

In the first regicide trial, that of Colonel (later, Major General) Thomas Harrison, the judge ruled:

to be disposed at the King's pleasure.

And that wasn't the end of it.

Preceding the butchering, the guilty were hauled in a sledge on the way to the gallows, wearing only a shirt to better receive the tossed objects and insults directed at them by Londoners and to ease the butcher's job of cutting off their privates after they had regained consciousness from hanging.

Until this reading, I had never thought too much about "drawn and quartered," but Readers, it was real and literal!

(The Capitol Hill insurrectionists should be thankful this is 2021 and not 1660 when the "regicides" were hunted throughout England and beyond.)

Head for the hills, man!

And that's what some did, to the Netherlands (those wretched Dutch who turned in the prey) and to New America where a hunt for Col. Edward Whalley and Lt. William Goffe was n'er successful, be that the two were hidden often by government officials and private individuals, on farms, in the wilderness, in basements (two years) until Mr. Whalley died and Mr. Goffe (his son-in-law) was never traced to his final "settlement" which, the author suggests, just might be in Virginia.

King Charles II was so mad that his New World subjects and huntsmen could not find "the most prominent" of his father's killers, Whalley and Goffe, that he took away New Haven's independence and made it part of Connecticut. Take that, you blarney killers!

(Streets in New Haven still bear the regicides' names like 10 Downing Street in London, named after a "first-rate traitor," one of King Charles II's men, who tricked the Dutch and captured three regicides, including his former commander. Samuel Pepys called Downing [doesn't deserve a first-name listing] "a perfidious rogue.")

Then there was Dame Alice Lisle, a mother of 11 and in her late 60s who had harbored two regicides and was the wife of the regicide John Lisle, already dead by 21 years, killed by an assassin in Switzerland, but don't hold that against her, and they did.

Off with her head!

The judge became part of her prosecution and the jury debated all of 15 minutes, and Dame Alice, a community pillar, became the last woman beheaded by order of the English government. (Her sentence had been commuted from burning at the stake, the usual death sentence given to women.)

One famous regicide (or regicide supporter, depending on what you read), and still known to us today was John Milton (1608-1674), the poet who was imprisoned in the Tower of London for a few weeks and penalized financially, but he was one of the lucky ones who kept his head. (Sometimes, the writing profession can be a lifeline.)

Charles II had the body of Oliver Cromwell (the chief insurrectionist who died in 1658) and others dug up, hung at the gallows, beheaded, and spiked on poles for the thousands to see, a lesson to all you commoners who even thought about killing a king. (Wikipedia's list of the regicides excludes Poet Milton.)

Reader, if you can get through all of the names at the beginning of the book, you've overcome the most boring parts, and the pace quickens to the actual trial of the king. (The index is excellent.)

And whether at the beginning you're unsure if you support the king or the regicides, by the end you'll be rooting for the latter as did I and also, the author who dedicates the book as tribute to them (and "Charlotte").

As usual, I am asking, please, for a glossary of the players with brief biographical sketches to help the reader keep them straight, and a map of escape routes would be useful, too.

Who's got the movie rights? I want to see it, but, no gory parts, please!

Posted by Patricia Leslie at 2:05 AM No comments:

A sight for all eyes: the Marquesa at the National Gallery of Art 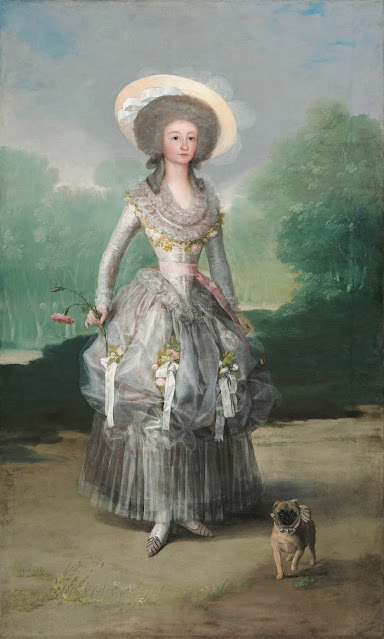 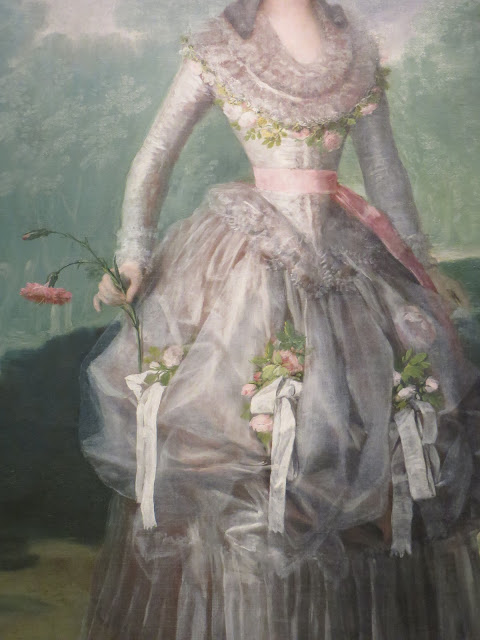 Note the lovely flowers and ribbons which adorn her engagement gown and the limp carnation in her right hand. Only women can imagine how "scratchy" the dress was/Detail of The Marquesa de Pontejos, c. 1786 by Francisco de Goya, National Gallery of Art, Washington 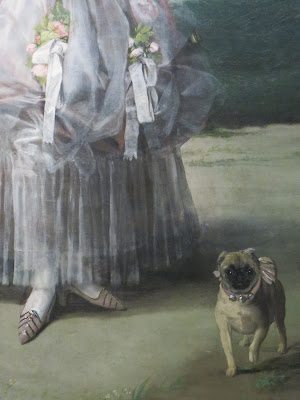 
Francisco de Goya (1746-1828) of Spain was the artist who painted the Marquesa (1762-1834) when she was 24. Likely it was for an engagement portrait for her first marriage to the nobleman Francisco de Monino y Redondo, the Spanish ambassador to Portugal. (Twenty-four seems rather old for a woman's first engagement for that time period and even, "old" centuries later. If this is her engagement gown, imagine her wedding apparel.)

After her husband's death in 1808 the Marquesa married a royal bodyguard, Don Fernando de Silva y Meneses, who died in 1817 before her last marriage in the same year to her most famous husband, Joaquín Pérez Vizcaino y Moles (1790-1840 and 30 years younger than the Marquesa!).

Joaquin joined forces with the militia to oppose King Ferdinand VII, which forced the couple to flee and spend 11 years traveling throughout Europe (mostly in France) before they returned to their native country.* 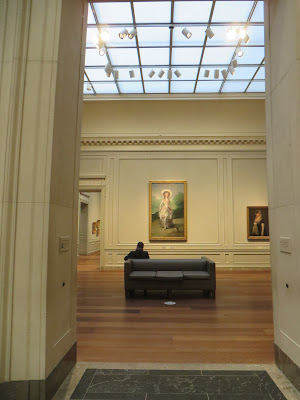 The Marquesa de Pontejos, c. 1786 by Francisco de Goya presides in a prominent gallery at the National Gallery of Art, Washington/Photo by Patricia Leslie 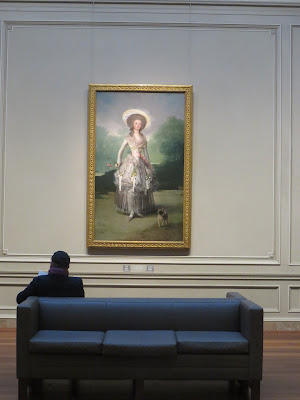 The Marquesa de Pontejos, c. 1786 by Francisco de Goya, National Gallery of Art, Washington/Photo by Patricia Leslie
The Marquesa was born on September 11, 1762, the only child of a wealthy Spanish couple. When her father died in 1807, she inherited her title.
She's a beaut, a tall lass, elongated in the manner of  Diego Velázquez  whose works Goya admired and found in the royal collection to copy. Goya was a masterful portraitist, considered "the most important Spanish artist" of his time, says Wikipedia, 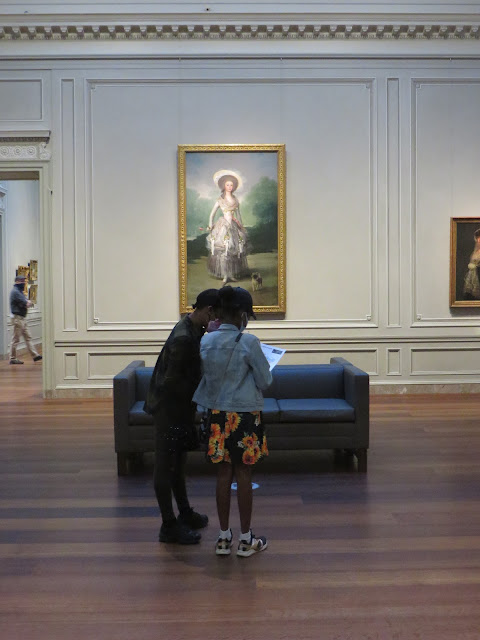 Finding their way at the National Gallery of Art in Washington, overseen by The Marquesa de Pontejos, c. 1786 by Francisco de Goya/Photo by Patricia Leslie 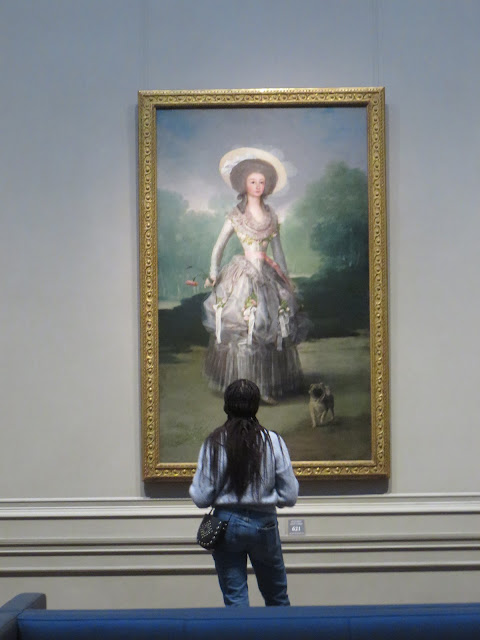 The wonder of The Marquesa de Pontejos, c. 1786 by Francisco de Goya, National Gallery of Art, Washington/Photo by Patricia Leslie 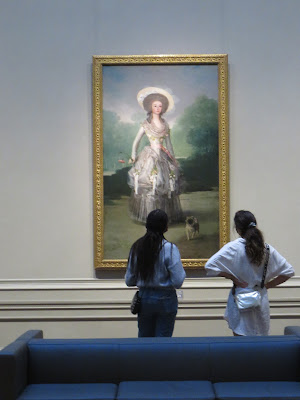 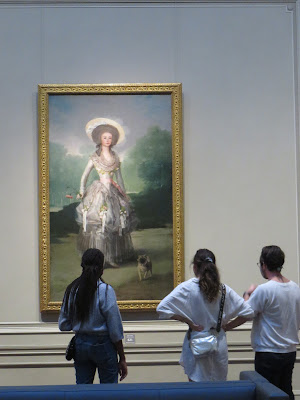 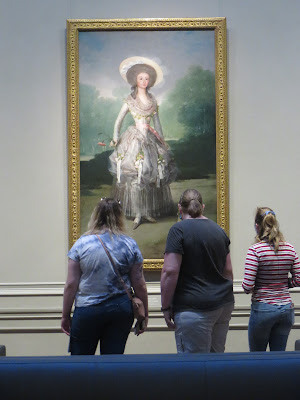 The Marquesa de Pontejos, c. 1786 by Francisco de Goya, National Gallery of Art/Photo by Patricia Leslie
Goya fancies the Marquesa in the style of Marie Antoinette, apparel which the Marquesa and others of her station declined to wear publicly because of shame and unpatriotic criticisms from common people.  (Rather like wearing a mink coat in the U.S. today: Beware of paint and PETA!)

Notes from art historians mention the Marquesa's tiny waist which was likely made possible by heavy corseting.

Look at it.  Possible?  Do you suppose artists then, as they do now, use their artistic license to remove pounds and lines? Especially for commissioned pieces?

The Marquesa's dress is strewn with fresh pink flowers, maybe roses, but alas, her expression is one of boredom, matched by the droopy, limp carnation in her right hand.  Art historians gleefully point to it as a symbol of "love," however, it matches her face and the suspected direction of a relationship we'll never know. Many women of high rank were portrayed with big smiles, missing here.
Was she unhappy at the prospects of marrying Redondo? I imagine it was an arranged marriage. for surely, Goya painted her in person without photographs (invented 40 years later).

She stood for him in the uncomfortable gear and look at her shoes!  Ouch!
Her head gear practically becomes a halo which, to an artist 16 years older, she might have possessed.
A pug in the lower right corner barks in the children's audio at this NGA link.

In 1786 the year of this painting, King Charles III appointed Goya the painter to the king and shortly after his coronation in 1789, Charles IV made him court painter.

Hear the NGA audio about the painting in several difference languages.

*From Jonathan Brown and Richard G. Mann, Spanish Paintings of the Fifteenth through Nineteenth Centuries, National Gallery of Art, 1990 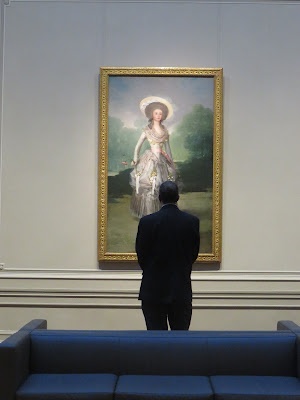 What: by Franciso de Goya

For more information: 202-737-4215
How much: Admission to the National Gallery is always free.

Posted by Patricia Leslie at 11:50 PM No comments: