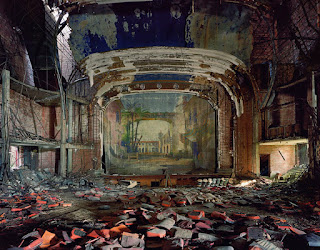 If it is peace and solace you may be seeking, however, this is likely not a good place to drop in since the renderings will leave you anything but calm. Many of the photographs will engage your mind in a tumultuous way, especially two by Andrew Moore (b. 1957): Palace Theater, Gary, Indiana, 2008, and Model T Headquarters, Highland Park, Michigan, 2009.

Palace Theater, a large color picture, is a haunted house, the den of the Phantom of the Opera, a graveyard of old pieces which I loved for its magical effects and the ability to lose myself in what was.

It is full of objects and stimulation, and once you see the photograph, it shall not be  forgotten.

Moore's works described in the exhibition's catalogue are photographs of "places which have undergone accelerated cycles of growth and decay, transfigured less by the slow march of time than by sudden catastrophe  or cataclysmic change."

The son of an architect, Moore studied photography at Princeton and spent thirty years taking pictures of buildings which have seen their uses change, their facades decay and, in some cases, disappear, like a tree in the forest which eventually withers, bends, and dies. Like an old person in a nursing home with no one to attend to her, sitting, waiting to totally collapse into a heap of death. But those are living things and buildings are not.  Or, are they?

To see the Palace Theatre in its last state, one of decay and ruin, one can easily imagine the grandeur and beauty it claimed when it served Gary as a center of activity and performance, color, and vitality.  The "before and after."  The theater was built in 1925 for vaudeville acts, then it became a theatre, and now...What is it now? 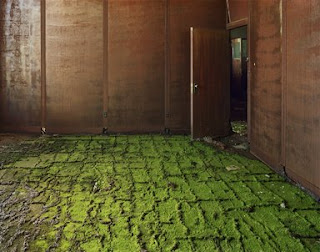 And then there is Moore's Model T Headquarters, half consumed by a grassy green carpet where moisture and mildew odors seep through the picture, and almost ooze out onto the gallery floor, enough to practically smell the putrid odors.  The open door in the photograph leads to past human interaction, while isolation and loneliness are what remain. The curvy lines of the grass contrast with the lines of the door and the wall which mean...what?  In a previous life, I saw many empty scenes like this one in empty, vacant buildings.

In the exhibition are 76 photographs by 26 international artists, presented for the first time at the National Gallery of Art. Curators are the Gallery's Sarah Greenough and Andrea Nelson.

We the people are grateful to the Alfred H. Moses and Fern M. Schad Fund which made it possible for the National Gallery to acquire these photographs.

The third and last exhibition of the photography series is Celebrating Photography at the National Gallery of Art:  Recent Gifts, scheduled November 1, 2015 through March 27, 2016.

The first was In Light of the Past: Twenty-Five Years of Photography at the National Gallery of Art which closed July 26, 2015.

What: The Memory of Time:  Contemporary Photographs at the National Gallery of Art

Where: Ground Floor, West Building, National Gallery of Art, between Third and Seventh streets at Constitution Avenue, N.W., Washington, D.C. On the Mall.  (Closest exhibition entrance is on Seventh Street.)

Posted by Patricia Leslie at 11:17 AM No comments:

Street scenes, modernism, and documentary works are among the 130 photographs by 33 artists which are on view through this weekend in American Moments: Photographs from The Phillips Collection.

It's a modern American history lesson told in pictures, capturing everyday people at work and play. 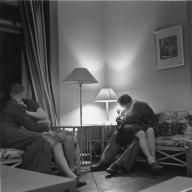 They photographed more than just the bigger cities and New York.


Esther Bubley (1921-1998), a "people photographer," who, early in her career,  quickly abandoned a  job at Vogue because she didn't like it, traveled the world, taking pictures for Life magazine, Ladies Home Journal, and for the federal government's Office of War Information, among many employers.

She documented everyday scenes, and a series of her pictures at the Pittsburgh Children's Hospital led to her inclusion in an exhibition at the Museum of Modern Art in 1952.

Another woman included in the Phillips' display is Berenice Abbott (1898-1991), known for her stark black and white shots of New York City in the 1930s.

Is it true that the works of most great artists stem from miserable childhoods?

Ms. Abbott credited hers for her independence, self reliance, and determination, according to the International Photography Hall of Fame and Museum where she was inducted in 2000.  The museum notes her achievements "are wider ranging that anyone else's in the history of American photography."

The Phillips presents the exhibition "in celebration of recent major gifts," many on view for the first time at the museum.

What: American Moments:  Photographs from the Phillips Collection

Patricialesli@gmail.com
Posted by Patricia Leslie at 11:40 PM No comments:

The Morgan Library and Museum is "must see" in NYC 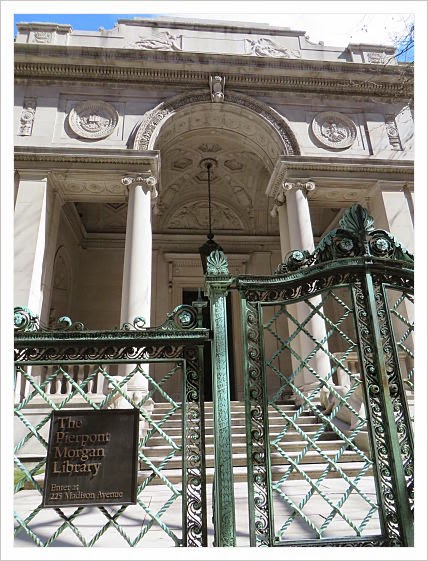 What was formerly the Pierpont Morgan Library is now the Morgan Library & Museum in New York City and one hazards a guess about the shortened name.  Because we now speak and write in monosyllables? 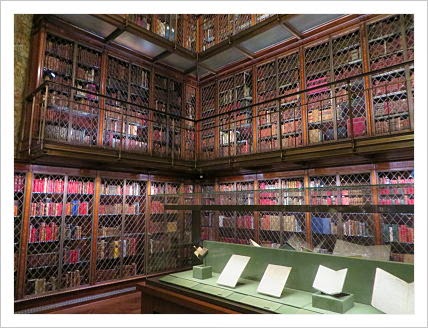 Caged books at the Morgan Library, on three levels, however, a guide said, with an appointment, the books are available to the public/Photo by Patricia Leslie 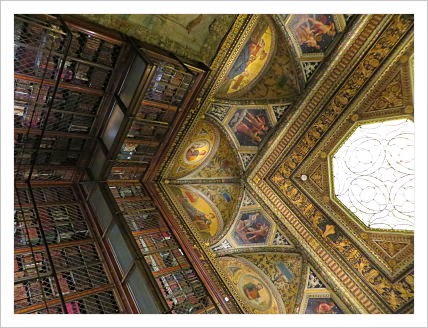 The guard said everything was attached to an alarm so I should refrain from picking anything up.  I did not pick anything up. 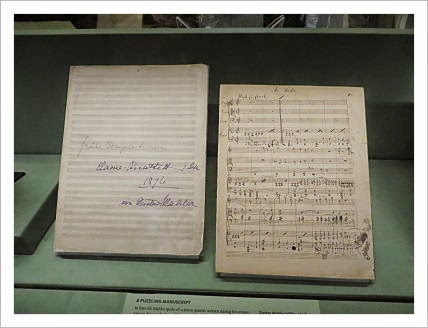 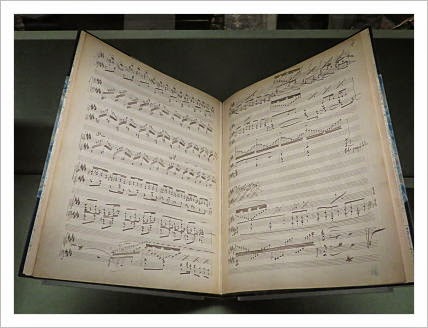 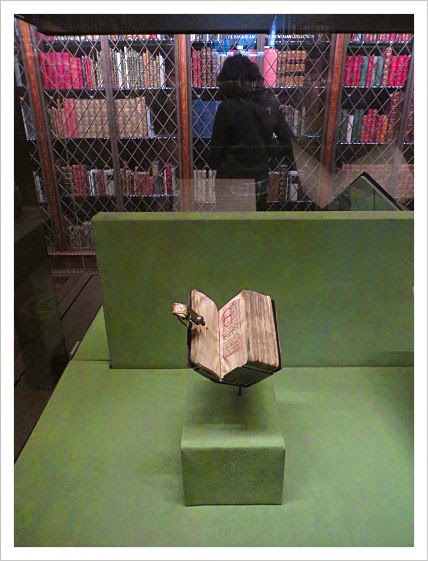 The little book in the foreground is a pocket-sized Magna Carta, its "earliest widely obtainable" form, like those which lawyers carried around in their robes for ready reference, according to the label. It was written in Latin and Anglo-Norman-French and dates from c. 1300/Photo by Patricia Leslie 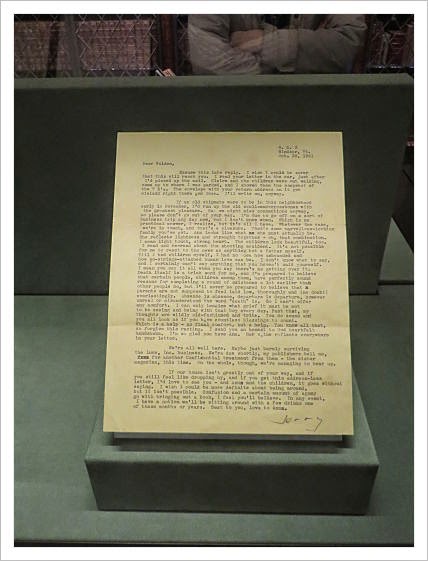 This is a letter from J.D. Salinger (1919-2010) to Holden Bowler, a lounge singer whom Salinger met on a cruise ship when Salinger worked as activity director in the Caribbean in 1941.  Salinger told Bowler he had a book in mind, and he would use Bowler's first name for his protagonist, Holden Caulfield/Photo by Patricia Leslie 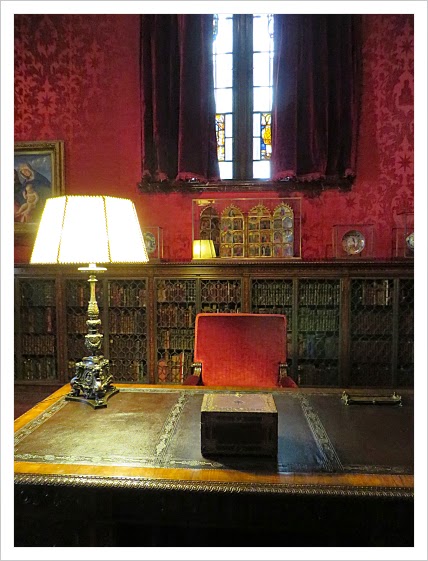 Mr. Morgan's desk and chair in his study/Photo by Patricia Leslie 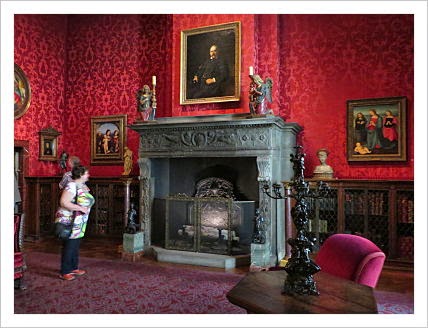 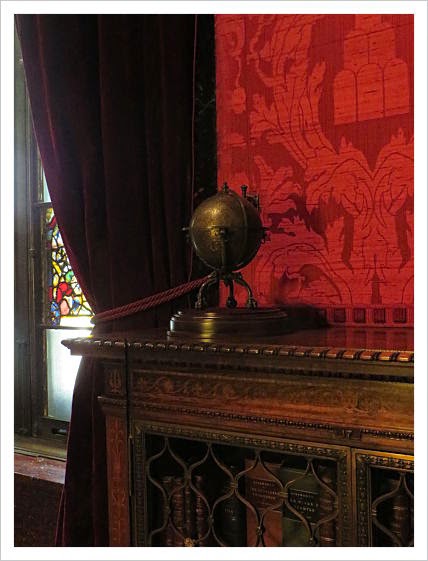 The guard said this was the "first globe." I failed to ask him, "first globe of what?" It is in Mr. Morgan's study/Photo by Patricia Leslie 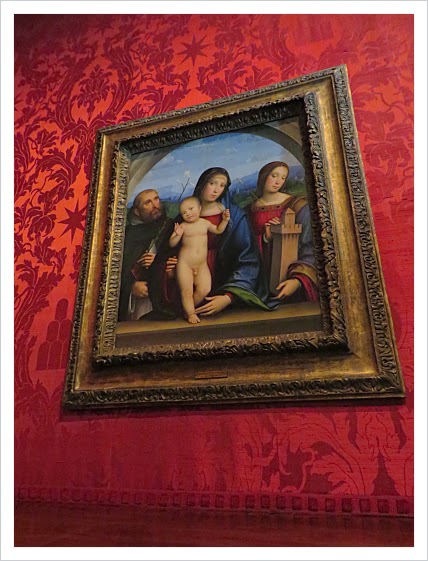 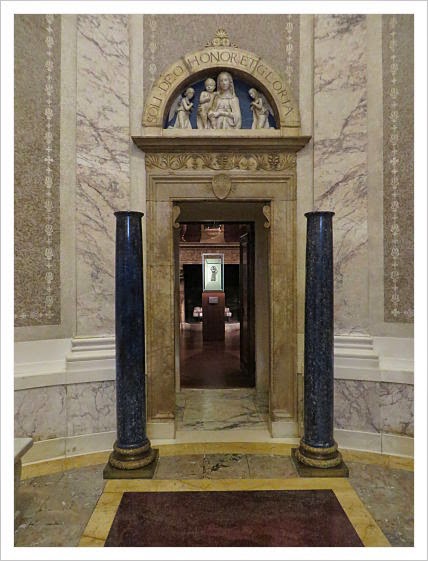 The entrance to Mr. Morgan's former office, now a gallery which houses jewelry more than 1,000 years old/Photo by Patricia Leslie 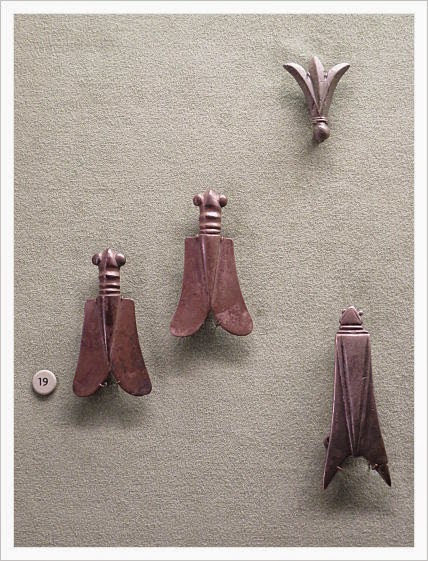 Cicadas, anyone?  How about some cicada brooches?  Big ones (life sized?) which date 380 - 500 A.D.  and worn by Germanic women who lived along the Danube River and the Black Sea, on display at the Morgan Library.  The label says cicadas "symbolized immortality in the ancient world, perhaps because of their apparently miraculous regeneration after long periods of dormancy."/Photo by Patricia Leslie 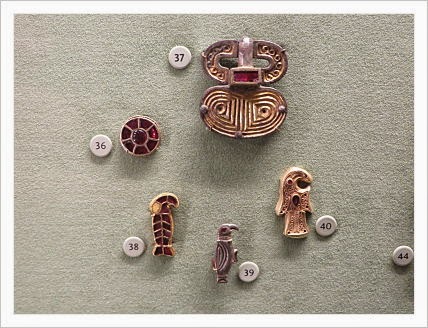 Merovingian jewelry, 450 - 610 A.D., at the Morgan Library.  Can you detect the bird brooch, the eagle brooch, the composite bird brooch casing, the buckle, and the disc mount (36, far left), the last which is similar to that found in the grave of the first Merovingian king, Childeric (d. A.D. 481)?  A typographical error in the label copy identifies the buckle (at top and worn by elite warriors on their sword belts) as the eagle brooch (38, second from left, below the disc mount)/Photo by Patricia Leslie Garnets and gold jewelry were popular in the Middle East and along the shores of the Black Sea from around 50 to 300 A.D. On top is a pendant, and in the center, a pair of earrings, and a ring at the bottom, all on display at the Morgan Library & Museum/Photo by Patricia Leslie 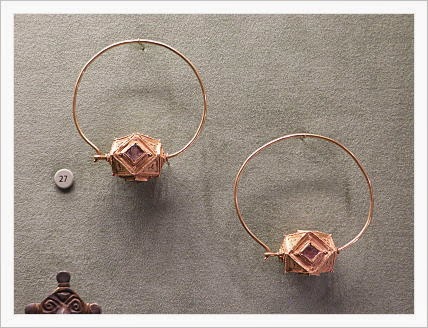 These are "Eastern Gothic" earrings, with polyhedral beads, c. 500 - 620 A.D., and larger than a woman's wrist, on display at the Morgan Library & Museum/Photo by Patricia Leslie 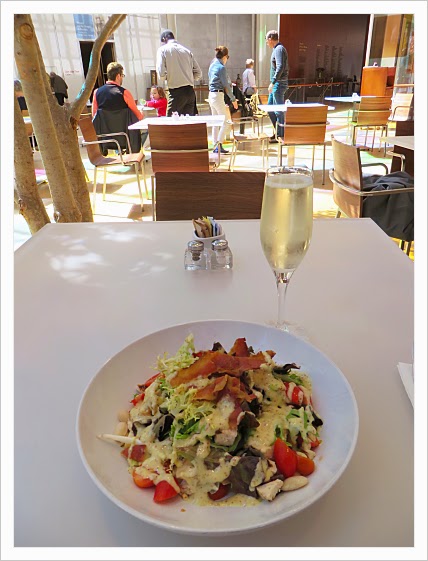 To complete a delightful experience, go for lunch at the Morgan Library & Museum/Photo by Patricia Leslie
The guard said Mr. Morgan had an underground passageway to travel from the library to his home (located nearby at 219 Madison Avenue before it was torn down in 1928 to make way for an expansion of the library). 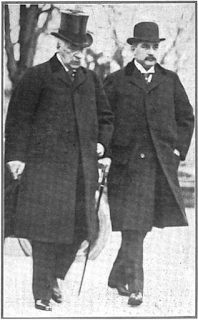 I was pleasantly surprised by the contents and building, and was made to feel welcome by the friendly staff throughout, unlike the reception I received from the woman with long brown hair at the Frick Collection who prevented my access to public places and practically shoved me out the door, well before its 5 p.m. closing.  Goodnight, Frick!

What: The Morgan Library and Museum

For more information: 212-685-0008 or email visitorservices@themorgan.org
patricialesli@gmail.com
Posted by Patricia Leslie at 11:40 PM No comments: