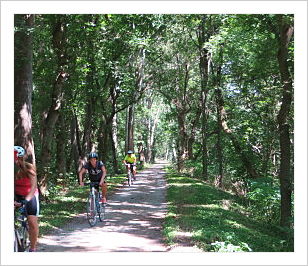 Bikers along the Chesapeake and Ohio Canal Towpath near Shepherdstown, WVA.  The path ranges from 7 to 12 feet across, and although it may look like Spanish moss hanging from the trees, it's not/Photo by Patricia Leslie 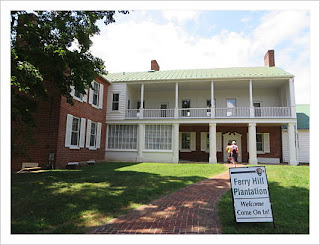 An adventure may begin at the Ferry Hill Plantation managed by the National Park Service and located on a hill above Shepherdstown, WVA where free bicycles and gear are available on weekends through Labor Day.  (Call ahead:  301-582-0813.)

During the Civil War, after the Battle of Sharpsburg/Antietam, the Confederates housed their wounded at Ferry Hill.  They used the grounds as headquarters and encampment sites, like the Union forces did (at separate times).

Ferry Hill lies above the Potomac River which troops crossed during the Antietam, Gettysburg, and Monocacy campaigns.  A NPS brochure says that when Union soldiers suspected the mistress of Ferry Hill, Helena Blackford Douglas, of conspiring with Confederates across the river, they imprisoned her husband, Robert, a minister.  Robert's son, Henry Kyd Douglas, was an aide to Confederate Lt. Gen. Thomas J. "Stonewall" Jackson, and wrote I Rode With Stonewall/Photo by Patricia Leslie 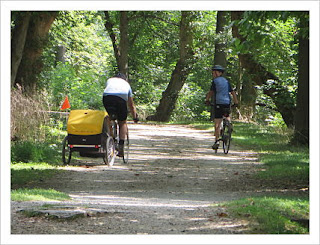 "Honey, you're in the wrong lane!"/Photo by Patricia Leslie 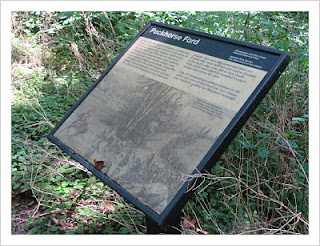 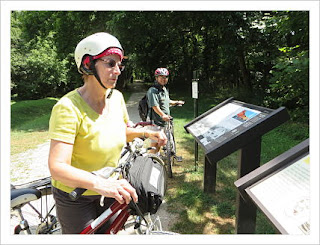 Barbara Humes, left, Harpers Ferry guru, and NPS guide Cindy Brockman, in the distance,  stop to read what it's all about on the Chesapeake and Ohio Canal Towpath near Shepherdstown, WVA/Photo by Patricia Leslie 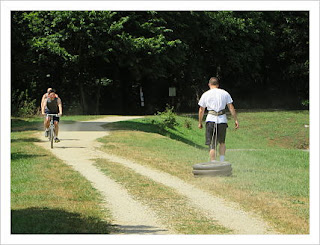 What I've always wanted to do: run with a tire strapped to my body.  Yee-haw!/Photo by Patricia Leslie 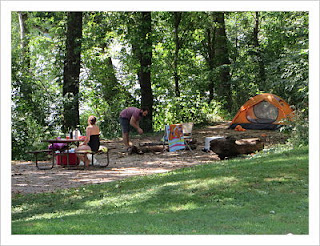 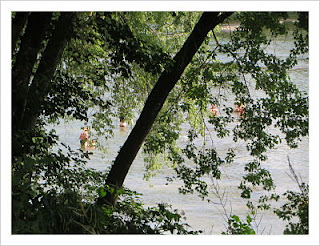 A brochure says swimming in the Potomac River is verboten, but these swimmers do not understand German. Overheard in English:  "Jackie!  Bring me a beer!"/Photo by Patricia Leslie 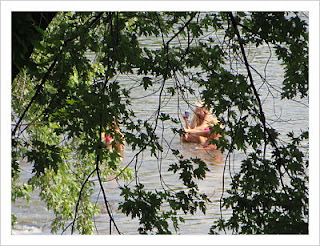 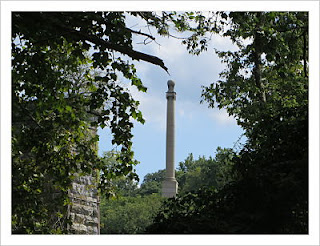 A monument to James Rumsey (1743-1792), on the banks of the Potomac River at Shepherdstown, WVA, seen from the Towpath on the other side of the river.  In 1785 George Washington appointed Rumsey to be the first construction superintendent to build a canal at Great Falls, but Rumsey quit after a year when he did not get more pay.  Rumsey invented a self-propelled steam boat which he launched at Shepherdstown in 1787, and he has a following dedicated to his cause: the Rumseian Society/Photo by Patricia Leslie 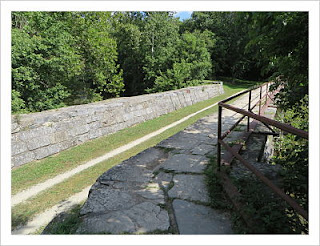 The Antietam Aqueduct along the Chesapeake and Ohio Canal Towpath, north of Harpers Ferry.  The aqueduct was built in 1834, mostly by Irish immigrants, many who died from a cholera epidemic which swept the campsites/Photo by Patricia Leslie 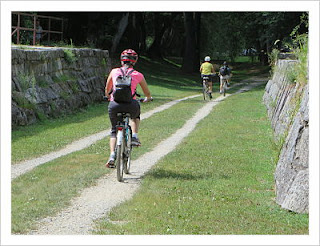 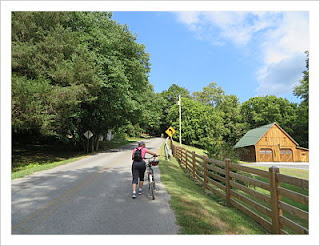 This hill, the last rung before reaching Ferry Hill at the end of the ride,  is much steeper than it looks!/Photo by Patricia Leslie

You can't go wrong with an adventure along the Ohio and Chesapeake Canal which stretches 184.5 miles from Georgetown to Cumberland, Maryland, but it's not necessary to do it all in one day. (!)

You may begin the fun with lunch at the Blue Moon Cafe in Shepherdstown, West Virginia, highly recommended with its large and varied menu, good food (and beer), sure to please most everyone (including babies and dogs) in a delightful, shaded outdoor setting with indoor seating, too.

After tasty treats, you may proceed through Shepherdstown and Shepherd University and head over the bridge atop the Potomac River into Maryland, home of the Ferry Hill Historical Park which is up the hill and immediately to your left.  There you will find free bikes, helmets, and a National Park Service guide (if you're lucky, she'll be Cindy Brockman) to lead you along the street and down, down, down the path to the grassy green wonder of the Ohio and Chesapeake Canal Towpath.

You can walk, run (with a tire), or ride the trail in gaps, like we did, starting at the Ferry Hill Mansion and ending at the Antietam Aqueduct (about six miles round trip). The trail straddles the Sharpsburg/Antietam Battlefield, and is beautifully shaded which helps keep you cool.

The park is "trash free," meaning you take out what you bring in, and at the Ferry Hill Mansion, no bottled water is sold, so take your own container or buy one there.

Exercise, an outdoor setting, nature, fresh air, camaraderie with friends, tranquil scenes, history, butterflies, sunshine and Vitamin D, all things good for you and available at no charge at Ferry Hill.

patricialesli@gmail.com
Posted by Patricia Leslie at 12:32 PM No comments:

Love nights and jazz notes at the Sculpture Garden 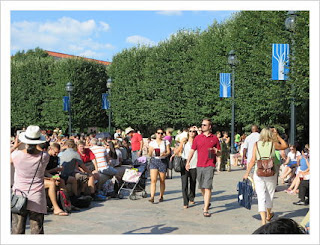 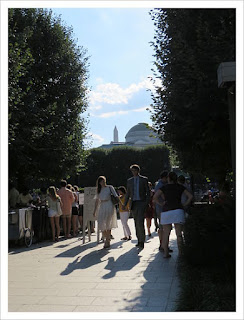 In the distance is the dome of the Smithsonian Museum of Natural History and beyond it, the top of the Washington Monument, seen from one of the entrances to the Sculpture Garden.   In the winter, the Sculpture Garden's center becomes an ice rink/Photo by Patricia Leslie 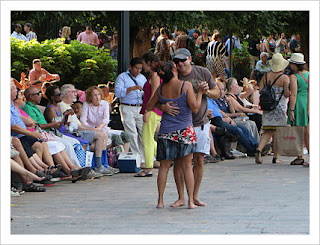 Shoes are not required at the Sculpture Garden at the National Gallery of Art.  And shirts?/Photo by Patricia Leslie 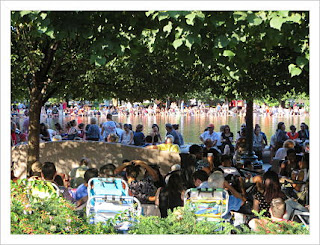 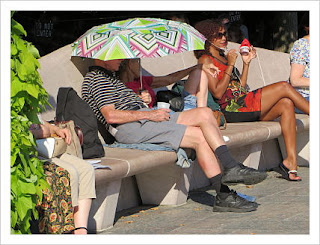 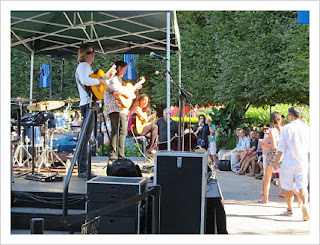 Incendio made music at the Sculpture Garden at the National Gallery of Art on July 31, 2015/Photo by Patricia Leslie 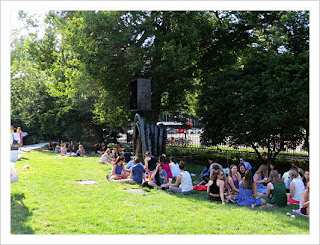 The amount of visible grass at the Sculpture Garden set a record for the summer.  (You have to attend to know what I mean.)  A guard told me the week before was packed, and we mused about the reason.  The salsa dancing?  He said people were dancing galore.  Center in the photo is Joan Miró's Personnage Gothique, Oiseau-Éclair (Gothic Personage, Bird-Flash), 1974, cast 1977, bronze, Gift of The Morris and  Gwendolyn Cafritz Foundation/Photo by Patricia Leslie

Oh, yes I can make it now the crowd is gone.
All of the bad feelings have disappeared.
Here is that seat I've been longing for.
It's gonna be a bright (bright)
bright (bright) moonlighty night. 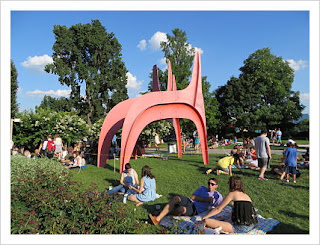 This could be a park at the beach with a big, pink elephant to admire.  It was actually a lark in the park at the Sculpture Garden with Alexander Calder’s Cheval Rouge (Red Horse), 1974, on long-term loan from the Calder Foundation, New York/Photo by Patricia Leslie 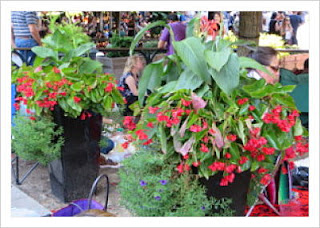 Look at these beauts!  The latest in head fashion, newly arrived from Hermes for next year's entrants in New York City's Fifth Avenue Easter Parade/Photo by Patricia Leslie 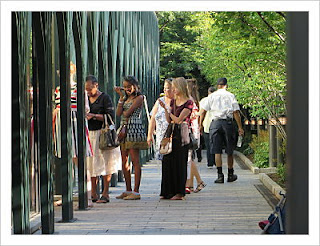 Something which never changes at the Sculpture Garden's party nights:  the long line for the ladies room/Photo by Patricia Leslie 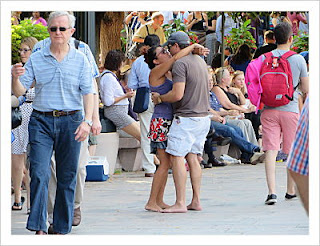 This year is the 15th season of free sculptures in the jazz garden or free jazz in the Sculpture Garden (take your pick, they both are available) to be seen and heard on Friday evenings, now through the end of August at the National Gallery of Art's prized outdoor jewel.

Inside the gated community (outsider alcohol, verboten, with bag check) are fascinating sculptures to admire (both of the permanent and human varieties), live music to hear, and food and beverages to consume to launch the weekend celebration.


Which sculpture is your favorite?  As you ponder the answer, you may settle on the meaning of life.  Stand at different corners of Roy Lichtenstein's House I (1996, fabricated 1998, fabricated and painted  aluminum, Gift of The Morris and Gwendolyn Cafritz Foundation) and watch it move.  What does it mean?

Or consider Roxy Paine's Graft, (2008 – 2009, stainless steel and concrete, Gift of Victoria and Roger Sant) waving towards Capitol Hill.  It's easy to determine a meaning.

Last Friday night, it was not the band which stole the show, but the usual suspects:  the people, the scenery, the young, the old, the babies and bold were all on hand.  It's lots of fun. With lots of food and beverages to buy.

Upon arrival I ducked in the cool (air conditioned) Pavilion Cafe to find just a few ahead of me in the food line, and my favorite dish, the hummus plate.

I placed my order with the fellow behind the counter who skidded it across the counter top to me, and upon examination, I tossed it back:

"Where are my grape leaves? This is the wrong plate."


Yesterday all my food plans since have gone astray,
Now the menu is in serious decay,

And I may have to eat at the Subway

Suddenly I'm not as excited as I used to be.
There's a leaf hanging over me.
Oh, yesterday came suddenly.

Why grape leaves had to go, I don't know, no one would say.
They made dinner gong, and I long for yesterday.


Yesterday, eating hummus was such a holiday

And this was heard in passing:

With drooped shoulders and a sadness that only grape leaves could shatter, I made my way to the sweltering outdoors and the line for bar-be-cue.  And beer.

Alas!  No lite on draft!  Only Stella.  Pullease.

And no place to sit.

Ho hummus, I bought some bar-be-cue.  (Honestly, these Nawrtherners don't know what bar-be-cue is. Have they ever been to the Saoyuth and tasted bar-be-cue?)

In a roped-off area, a guard stood on a stone wall where a fellow sat smoking near the constantly long line for the ladies room, and with the guard's permission, I sat down to eat.  No problems. Not even smoke got in my eyes.

But, Sculpture Garden:  Why so few seats?  I declare the number of bars at your party has doubled, and it does seem like seats have been removed to fit more people inside the province.

Sculpture Garden:  Have you ever been to the South and sat in grass and later discovered you've been devoured by invisible chiggers?  The aggravation lasts about five days, and you have to scratch in the most private of parts!  Once done, you will never sit in grass again, I don't care if it's plastic grass the Inuit have planted for decoration in Nunavut.

Sculpture Garden:  I do not sit in grass.  But, I do have a suggestion for a new sales item for your Friday night gigs:  towels for rent.


Party people, hurry!  There are not many Friday weekends left (4) before summer fun ceases, and soon, it will be brown and dull winter when the temperature may drop to minus 30, and we shall be frozen solid in our winter tombs.  Better to enjoy life now while we've got it!

Where:  The Sculpture Garden, National Gallery of Art, between Seventh and Ninth streets at Constitution Avenue, N.W., Washington, D.C. On the Mall.

Admission: No charge, but you may want to bring some coins for drinks and treats.


patricialesli@gmail.com
Posted by Patricia Leslie at 11:58 PM No comments: