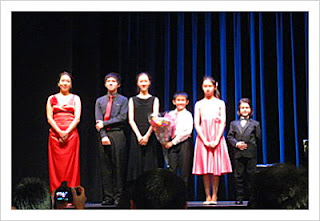 International piano stars at the Kennedy Center, from left: Mihyun Lee, Matthew Eng, Vivien Zhu, Ethan Hsiao, Gloria Cai, and Tyler Fengya/Patricia Leslie
Their keystrokes and music coming from the Steinway on the Millennium Stage Tuesday evening left audience members star struck by talents displayed by those so young. Unless you were there, it is almost impossible to believe, but the large screen up above the stage on the heavy curtain displayed close-ups of nimble fingers and focused eyes, and we realized we were witnesses to distinction.
The performers are the world’s best pianists for their age groups, as selected in the 28th International Young Artist Piano Competition, and three of the five are area residents.
First up on the stage was seven-year-old Tyler Fengya who began his piano lessons at age three and won his first competition a year later. A school student in Clifton, N. J., Tyler played Claude Debussy’s “Clare de Lune” and “Chinatown Rag” composed by Li-Ly Chang who founded the competition in 1986.
Promoting Chinese composers and strengthening ties between the East and West are two goals of the contest which requires participants to play selections by Chinese and western composers.
Tyler was not the only pianist to play a piece written by the competition’s founder. Mihyun Lee, the prize winner for the Young Professional group ages 19 through 28, chose Ms. Chang’s “Taking Shapes” and, also, Maurice Ravel’s “La Valse.”
A Korean native who is a Ph.D. student in musical arts at Ohio State University, Ms. Lee has a solo recital coming up later this year at Carnegie Hall.
Gloria Cai, age 10, a school student in Ellicott City, Maryland, came to the stage after Tyler. She began her training at age 4 at the knee of her grandmother, Yuhua Gu. When Gloria was seven, she won her age category in the international contest. For Tuesday’s show Gloria played “Flower Drum Song” by He Hsao Yin and Frederic Chopin’s Etude, Op. 10, No. 5.
Next on the bench was Ethan Hsiao, 11, who began his piano lessons at age six. A school student in McLean, Virginia, Ethan played Aaron Copland’s “The Cat and the Mouse.”
Vivien Zhu, 14, attends high school in Rockville, Maryland, and she started musical training at six. Her selection was Enrique Granados’s Allegro de Concierto, Op. 46.
Matthew Eng, 15, a student in Moorestown, New Jersey, began studying piano at age seven, and his selections were Quan Jihao’s “Combination of Long and Short” and Alexander Scriabin’s Sonata No. 9, Op. 68 “Black Mass.”
The winners of numerous awards, prizes, and scholarships, the young medalists have performed on television and at top venues across the U.S., including, in Ms. Lee’s case, Korea.
Without question those of us who hold classical music dear have many hours of listening pleasure to anticipate from these remarkable musicians.

Posted by Patricia Leslie at 9:44 AM

Yes, I was there that night and truly those young pianists are amazing! Had a wonderful night, and looking forward to seeing them more... Bravo!

Thank you for your comments. The young performers were truly outstanding in every sense. So polished and sophisticated.

Wished we had been there...
Tyler Fengya's performances are always unabashedly brilliant and profoundly engaging as he connects with the music and the audience!

The pianists did exceptionally well and have so much potential! Kudos to Lily Chang for putting this program together for the 28th year. We except more wonderful performances to come!

The talent those young pianists demonstrate are just beyond belief. It is just amazing.