Alexandria has greatness thrust upon it 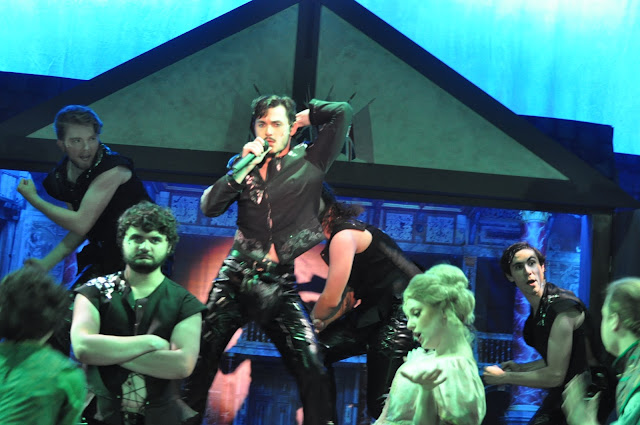 There's nothing "rotten" in Alexandria recently named by Travel and Leisure to the nation's Top 15 Best Cities to visit,* but Something Rotten at Little Theatre of Alexandria has got the whole crew and townspeople eggstraeggcited (?) and happy.

Theatregoers, this show is LTA's best musical comedy ever! 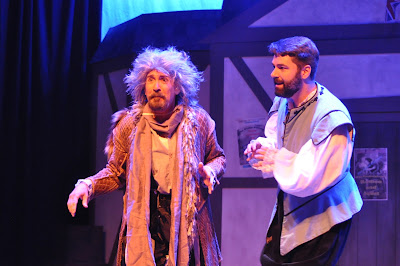 Immense will power to bring this off was required of director Frank D. Shutts II and choreographer Stefan Sittig who met the challenges with wondrous excellence.

The centerpiece is one William Shakespeare and the competition to beat him, can it be? 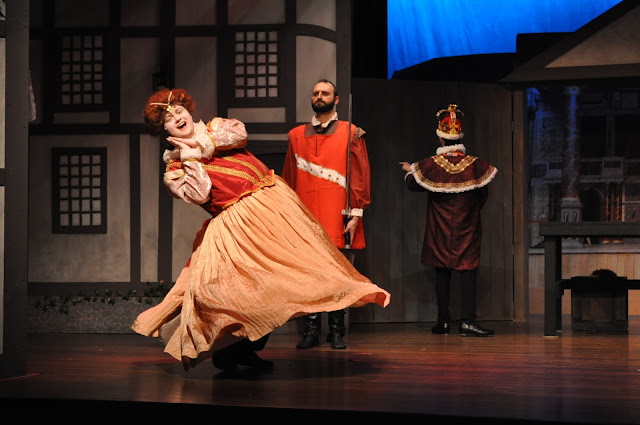 Never fear, Shakespeare sufferers:  Knowledge of the bard's works is not required.  But, surely, you've seen at least one of 30-odd shows mentioned in the production?**

The title, Something Rotten comes from one of the bard's plays***, but this Rotten of 1595 finds two brothers in England with a sad last name (Bottom) competing to top the best and write the world's first musical.

As soon as laugh-a-minute Nostredamus (Chuck Dluhy) makes his appearance, it's non-stop hilarity, amplified by the increasingly wild gyrations of eggomaniac Elvis Shakyspeare (Noah Mutterperl) who rattles and roils the stage.

He bears a charmed life.

Evan Zimmerman is Robin, another favorite actor, who never abandons long frocks to dance with delight and glide across the stage as if hopscotching the clouds,  floating across the sky in new apparel each time.

Speaking of frocks, costumers Jean Schlichting and Kit Sibley, aided by wardrobe coordinator, Robin Worthington, skilfully outfit the cast of 23, most in multiple scenes and most in different dress.

Hair and makeup artist Robin Maline has her hands full, perfecting the looks of Elizabethan characters in exceptional manner.

Lighting designer Ken and Patti Crowley are busy, giving the audience an "aaahhhh" moment when brother Nigel Bottom (Jack Dalrymple) and Portia (Katie Conn) realize in a starstruck milli-second, that the other is their one and only. Lights flicker, hearts flutter and pounding pulses could be heard, or maybe that was just the effect created by sound designer David Correia.

Christopher A. Tomasino leads an orchestra of nine  unseen-but-well-heard-and-received musicians who add tremendous depth and enjoyment to the show.

In real life, brothers Karey and Wayne Kirkpatrick spent years talking about this play before they finally got down with John O'Farrell to put it all together and write the book, music and lyrics.

(Read about their odyssey here.)

"We know what we are, but know not what we may be."

In 2015 Rotten received nominations for nine Tonys, eight Drama Desks, and 11 Outer Critics Circle Awards and I wondered why it only lasted for 708 performances on Broadway, but it's here now, and that's what counts.

The Kennedy Center might just want to cross the Potomac, take a look and import this cast and crew!

*Alexandria was #8 in readers' choices.

** At the theatre, ushers give theatregoers a list of 31 musicals referenced in Something Rotten, but there's more.  Which four did it omit?

***Hamlet has the reference to "something rotten."

Duration: About two hours plus one 15-minute intermission.

Masks and vaccine cards or proof of a negative covid test within 48 hours of show time are required. No exceptions.

Public transportation: Check the Metro and Dash bus websites. Dash is free to ride and has routes which are close to LTA.

Parking: On the streets and in many garages nearby with free parking during performances at Capital One Bank at Wilkes and Washington streets.

Posted by Patricia Leslie at 11:53 PM