A haunted house howls in Alexandria 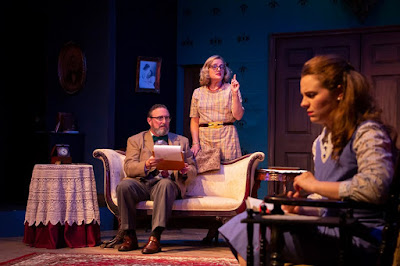 From left, Kirk Lambert, Patricia Nicklin, and  Shannon Labadie star in Little Theatre of Alexandria's The Haunting of Hill House/Photo by Matt Liptak

Just in time for Halloween comes The Haunting of Hill House now on stage at the Little Theatre of Alexandria with sounds, screeches, screams, poundings, and more rumblings like you have never heard before.

Sound designer Janice Rivera will surely receive a WATCH nomination for her work on this show which got its start 60 years ago as a novel by Shirley Jackson.

Since then, it has evolved into a radio series, a television series, two movies, and a play.

For the last century, Wikipedia calls Haunting one of the best literary ghost stories published and quotes Stephen King who describes it as one of the finest horror novels.

Is it any wonder that LTA chose it for the ghoulish season?

A foursome straggles in to Hill House where a sullen Mrs. Dudley (Danielle Taylor) greets them with official rules which she doesn't bend nor does she spend the night at Hill House, if you please.

The group has come to explore the mystics of this odd place since they've got supernatural on their minds. Never mind that they are strangers in a strange place.

Shannon Labadie is the mousy Eleanor whose dull personality (matched with excellent costuming by Jean Schlicting and Kit Sibley) springs to life once the haunts invade her spirits.  She stumbles into the surroundings as if she's walking in a spooked haze, wearing an imaginary beekeeper's hat which encases her mind with mysterious dandies.  In other words, Director Maggie Mumford has her in a constant fog.

After pleasantries are exchanged, the ladies meet the men of this weird four pack, Dr. Montague (Bruce Alan Rauscher), who has called the group to order. He is accompanied by "Luke" (James Murphy) whose reason for being I could not quite determine, unless, partners?

Enter Dr. Montague's wife (Patricia Nicklin, always one of my fav actors at LTA) on the arms of another man (Kirk Lambert). (Relationships are left unspoken.)

Ms. Nicklin's sweeping gestures, white gloves, and exaggerated mannerisms add much needed"grandeur" and humor to this house party where the choking environment threatens the weakest and swallows whole those among them whose souls dive into inner selves (?).

If you let it, a house can overcome you. This house is not a home.

Adapted for the stage by F. Andrew Leslie.


What: The Haunting of Hill House

When: Now through November 9, 2019. Wednesdays through Saturdays at 8 p.m. November 2 and 3 performances are sold out.

Language rating: G.  Youngsters will enjoy the sounds and environment but may find the story too difficult to follow.

Duration: About two hours with one 15-minute intermission

Parking: On the streets and in many garages nearby. If Capital One Bank at Wilkes and Washington streets is closed, the bank's lot is open to LTA patrons at no charge.

Posted by Patricia Leslie at 6:13 PM