Reston's 'Hairspray' is lots of fun and action 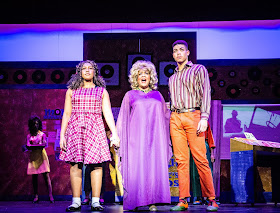 I can think of only one other production I've attended  when some members of the audience stood midway through a scene to applaud and cheer. The captivated could not wait for intermission or the end to praise the actors.

That performance was by Bette Midler in Hello, Dolly!  in New York.  The second time I saw it happen was last weekend in Reston when Bruni Herring sang  "I Know Where I've Been" in Hairspray.

They stood on their feet and shouted "Bravo!"

Ms. Herring's knock-you-out voice left many in wonder and hopes her song would never end. Rather than teaching Spanish at Fairfax High School, Ms. Herring should be singing on Broadway.

That and two more scenes (please read on) are well worth the price of admission alone to the new show by the Reston Community Players.

It is far better that the 1988 movie of the same name which gave birth to the 2003 Broadway show that won eight Tonys (including "Best Musical") and ran about five years.

The huge Reston cast is happy to be on stage where their good times transition to the audience.

Hairspray is much more than a common tale about an outcast, overweight teen whose exuberance and self-confidence embolden her to cast her net farther than her body and self-image would typically allow.

Underlying themes of fat shaming and discrimination are often understated here but convey their messages without beating you over the head with pronouncements. Fifty years later and the implications remind us of the significance of tolerance and acceptance.

Sensitivity to these matters nor historical knowledge of circumstances, however, is not required to enjoy the show for the just plain fun it is.

Tracy Turnblad (Dana Robinson) is an odd ball teenager (as are/were most of us) who is dying to be a guest on Corny Collins's (Benjamin Simpson) televised teen dance program.

Her energy and cheerful personality keep her standing, like she does in the clever opening scene which features her lying down in bed although she's standing up in a vertical design. (Convincing sets by designers and artists Sandy Dodson, Dan Widerski, Cathy Rieder and Sabrina Begley change almost as often as the dancers kick their heels.)


Naturally, Tracy makes it to Corny's show (or we wouldn't have a play), and in one scene she imagines her heartthrob, Link (Jake Lefler) to be smitten by her. Backdrop actors become effective stand still shadowy silhouettes as Tracy and Link dance in Tracy's dream.


My favorite characters all played the same roles with different names, the mothers. Edna (David M. Moretti, yes, a man in woman's clothing) is Tracy's mom who steals the show.

It's an hysterical start when Edna comes out with hair in rollers under a scarf, wearing dowdy clothing. (Hats off to costumers Lori Crockett and Ashley-Rose Dickey
whose plentiful designs and choices for 28 actors are varied and attractive.) No chance Edna is really a woman.

Edna's spouse is Wilbur (Richard Bird appearing in his first musical to huge success). A shimmering curtain serves as backdrop when the couple dance and sing   "You're Timeless to Me" in the second act, and they came back for more. 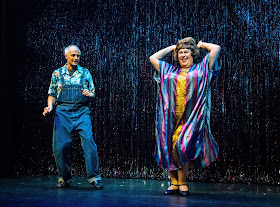 They are likable parents, unlike the antagonist, pushy mother, Velma (Katie Kramer) whose daughter, Amber (Maura Lacy) competes with Tracy for Teen Queen and, gulp, Link. (Ms. Kramer plays her sassy role with relish and is thoroughly believable and obnoxious. After all,  "It's all about us!" [Sound familiar?])

When Penny develops a fondness for a black student named Seaweed (Jalen Robinson), her mom goes ballistic. (Gasp. It is 1962 in Baltimore,  two years before the passage of the Civil Rights Act.)

Another favorite scene was the prison with long (10-12') grey pieces of "steel" to house captives who shake their bars to the tune of "The Big Dollhouse." (May I suggest a play subtitle:  Big, Bold Women.)

With sound much louder at times than a 10-person orchestra might suggest, the musicians sit in the pit under the direction of Kirsten Boyd on keyboards and add sizzle and swing to enrich the entertainment.

It's a jolly good show, one sure to shake you from  election eve (or later) doldrums, if you happen to be so stricken.

Based on the film by John Waters

Rated: PG (a few "damns" and a "hell") with some low-profile groping

Ages: Appropriate for most ages

What: Hairspray: The Broadway Musical

Duration: About 2.5 hours with one intermission.